The CIA Connection of the History Channel's New Woo-Woo Program, 'Brad Meltzer's Decoded', and the Origin of the 'Red Cell' - The Constantine Report
0 SHARES

Celebrity » The CIA Connection of the History Channel’s New Woo-Woo Program, ‘Brad Meltzer’s Decoded’, and the Origin of the ‘Red Cell’

The CIA Connection of the History Channel's New Woo-Woo Program, 'Brad Meltzer's Decoded', and the Origin of the 'Red Cell' 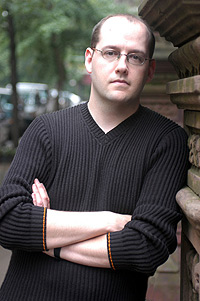 Best-selling South Florida-based author Brad Meltzer ... has a new show coming out on the History Channel in October. Brad Meltzer's Decoded features the author decoding familiar symbols. A History honcho read Meltzer's The Book of Fate and the rest was, well, fate.

Ten episodes have been ordered for the last part of 2010. Meltzer previously created the short-lived WB show Jack & Bobby. ...

Brad Meltzer has friends in high places, per his web site:

"[Meltzer's] The Book of Fate is about a young presidential aide, a crazed assassin, and the 200 year-old code created by Thomas Jefferson that ties them together. For authenticity, The Book of Fate was researched with the help of former Presidents Clinton and Bush. ... Brad ... co-wrote the swearing in oath for AmeriCorps ..."

Some of those friends are with the CIA:

In search of American heroes

"Brad Meltzer's co-created a TV series, taken DC comics to the dark side, and been recruited by the CIA." www.bradpilcher.com/writing/bradmeltzer.pdf

Meltzer was recruited to an intelligence unit of CIA counter-terrorist-imagineering consultants called the 'Red Cell':

The Department of Homeland Security, given the difficult task of trying to divine al Qaeda's future methods of attack on the United States, is seeking advice from some unexpected sources these days: futurists, philosophers, software programmers, a pop musician and a thriller writer.

Picking the brains of people with offbeat specialties and life experiences is the latest tactic in the government's efforts to get inside the heads of worldwide terrorists. Homeland Security's Analytic Red Cell office employs a tactic that has been used for decades by U.S. intelligence agencies, the Pentagon and large corporations -- gathering together people from outside their insular bureaucracies to arrive at fresh insights.

"We try to anticipate four, five moves ahead in the mind of our adversary," said Jon Nowick, director of the Analytic Red Cell program, which is part of the department's Information Analysis and Infrastructure Protection, or intelligence, unit. "We paint a picture where there are no dots to connect."  ...

Many participants have not worked much with the government before.

"When I got the call, I was floored," said Brad Meltzer, the author of several successful Washington thrillers, recalling his talk with the Homeland Security official who recruited him. "They said, 'We want people who think differently from the ones we have on staff.' "

He declined to say what scenario his session focused on -- like other participants, he had to sign a nondisclosure agreement. But Meltzer said among the participants in his session were a psychologist, a philosopher, a professor of Middle Eastern terrorism and employees of the CIA and FBI. ...

Meltzer, a Montgomery County resident, reckons Homeland Security picked him in part because some of his novels include closely held details about the physical layout of some key Washington landmarks, and descriptions of how people can sneak around and in them.

In his novel "The First Counsel," a young White House lawyer falls in love with the president's daughter, and the two evade Secret Service minders as they prowl tunnels beneath the White House. These sections of his books were based on careful reporting, and he had retired Secret Service agents vet them, Meltzer said.

Meltzer said he was impressed by the Red Cell team's ingenuity and seriousness. "If I can help the government on terrorism," he said, "that's better than being on the bestseller list."

The  origin of the "Red Cell":

By Thomas B. Hunter

In early 1984, U.S. Navy Cdr. Richard Marcinko, former commander of the Navy's elite counterterrorist unit SEAL Team SIX, was summoned to the office of Vice Admiral James A. "Ace" Lyons, Jr., then-Deputy Chief of Naval Operations.  During the course of the meeting, Admiral Lyons conveyed to the commander his concerns over the vulnerability of U.S. military bases to terrorist attack.  Marcinko was then directed to draft a proposal for a new unit, specifically tasked with testing the security of U.S. Navy bases.

This would not be the only mission of this new team.  In fact, testing of Naval; security was primarily a cover for the unit's primary function - covert counterterrorist missions conducted around the world.  In this way, a portion of the unit would deploy overtly to a given Naval base to carry out its security mandate, while a small element would covertly infiltrate a foreign nation to carry out whatever counterterrorist activity was required.  This "activity" as to be very much in line with the practice of aggressive neutralization of known terrorists carried out on a regular basis by nations such as Israel and Great Britain.  ...

In a short time, Marcinko chose the name "Red Cell" for this new unit (formally designated OP-06D) and set about selecting personnel.  According to his non-fiction book Rogue Warrior: "There were fourteen plank owners in the unit, three officers and eleven enlisted men - one platoon, two boat crews, seven pairs of swim buddies. It was a classic SEAL design."(RW, p. 293)  Thirteen of the fourteen SEALs were from Marcinko's former command, SEAL Team SIX.  The only non-SEAL accepted into the unit was Steve Hartman, a former member of the USMC's  Force Reconnaissance teams.

"... Marcinko was named commanding officer and founder of a second counter-terrorism unit, Red Cell. Commanding Red Cell, Marcinko was directed to use his team to test the Navy's anti-terrorist capabilities. As a result he was able to infiltrate seemingly impenetrable, highly-secured bases, nuclear submarines, ships and other purported "secure areas", including the U.S. Presidential plane Air Force One. In doing so he reportedly embarrassed several superior officers, whom he accuses of involvement in his subsequent conviction for misappropriation of funds and resources under his command. ..."

Today, Marcinko, like his Red Cell successor Brad Meltzer, is a media celebrity. He his own "conservative" talk radio show:

" ... Marcinko is a partner in a private security consulting firm whose clients have included the Detroit Metropolitan Airport, the White House Fellows and the U.S. Army War College. Richard Marcinko is a renowned motivational and team-building speaker who counts among his clients; General Motors, AT&T, Domino's Pizza, Motorola, BellSouth, and several other Fortune 500 companies. His company provides quarterly SWAT training for federal and law enforcement personnel nationwide. Through Eastern Michigan University, Marcinko also provides graduate-level presentations on topics such as terrorism, security and the adaptation of modern technology. Marcinko frequently guests on live radio and appears on television where he provides expertise on matters of foreign policy, special operations and terrorism. He has been part of a politically conservative talk radio show called America on Watch [subtitled: "with Dick Marcinko"]. ... "

... served as a consultant on FOX's television series 24.