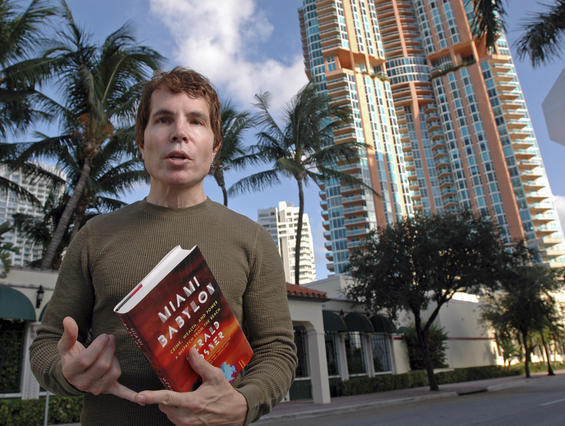 Disgraced Miami Beach author Gerald Posner is desperate. He apparently whitewashed an account of his serial plagiarism on his Wikipedia page, then threatened Miami New Times with a lawsuit for writing about it. And now he's retained an 83-year-old lawyer infamous for publicizing the "grassy knoll" theory of John F. Kennedy's assassination, a conspiracy Posner refuted in his most famous book.

To review: Posner, who has penned 11 books including a Pulitzer finalist, resigned as investigative writer for the Daily Beast website this past February. He acknowledged lifting copy. The Miami Beach author and former Wall Street attorney also admitted stealing scores of passages for his most recent book, Miami Babylon.

Now a new review of Posner's work shows much more. A 48-year-old Wisconsin doctoral student named Greg Gelembiuk has discovered Posner lifted 35 passages in two books: his 2003 take on the 9-11 attacks, Why America Slept, and Secrets of the Kingdom, a 2005 tome about Saudi Arabia.

Miami New Times provided Poynter Institute senior scholar Roy Peter Clark with three lengthy passages Posner apparently lifted in the 9-11 book. "This constitutes plagiarism by any definition I can think of," he says. "The capturing of someone else's material that is this extensive cannot, in my opinion, have been done accidentally."

The evidence (posted in full on miaminewtimes.com) contradicts Posner's rationale for his crimes in Miami Babylon. This past March 16, he told New Times he'd used a new system of "trailing endnotes" in Babylon, which he claimed had led to attribution problems. He said he hadn't used that system in past books.

Posner's lawyer, Mark Lane, is best known for writing Rush to Judgment, the mother of all JFK-conspiracy books. He declined to answer specific questions about the plagiarism, but cited unnamed "vulgar and threatening attacks" by the paper on Posner. He claimed the newspaper "interfered" with Posner's relationship with his publishers, Random House, by providing them with the latest evidence.

For its part, Random House responded to this paper's inquiry — which simply listed the apparent plagiarism — thusly: "A charge of plagiarism directed against any of our books is taken seriously... and we will closely examine the material alleging this in these two works."

The potential consequences? Unclear. Many news writers — including those employed by this paper — are warned at hire that any plagiarism is a firing offense. But life is different in the nonfiction book world.

Doris Kearns Goodwin, the best-selling historian, was famously caught plagiarizing in her 1987 book The Fitzgeralds and The Kennedys. In 2002, after a story appeared in the Weekly Standard, she admitted lifting wholesale from Lynne McTaggart's biography of Kathleen Kennedy. Her publisher, Simon & Schuster, even paid McTaggart a settlement to keep quiet. Eventually copies were recalled. Quotes and sources were added.

That same year, the Weekly Standard nailed fellow historian Stephen Ambrose for plagiarism in his best seller, The Wild Blue. Ambrose had cited sources, but failed to use quote marks around some borrowed prose. Simon & Schuster later issued a formal apology.

Here's how the 2003 edition of the MLA Handbook for Writers of Research Papers — the standard source for academic rules — puts it: "Presenting an author's exact wording without marking it as a quotation is plagiarism, even if you cite the source."

In Why America Slept, he lifted three passages totaling 927 words without crediting the book The Oklahoma City Bombing and the Politics of Terror, written in 1998 by David Hoffman.

Eleven other sources were apparently pilfered without citation.

Twelve sources are properly cited in the end notes, but the author copied exact wording — in passages as long as 134 words — without quote marks or any other clear demarcation.

Representatives of Simon & Schuster, which published Miami Babylon last year, have not responded to multiple emails and phone calls, so it's a mystery whether they plan to address the acknowledged problems in that book. Their reticence might have something to do with sales — Babylon has moved only 5,000 copies, according to numbers provided by the Nielson Company.

That's a stark contrast to Why America Slept, which so far has sold 63,000 copies, and Secrets of the Kingdom, with 19,000 books purchased. Substantial money is involved. Assuming, with some rough math, that each sold about half hard-cover and half paperback at average prices, Why America Slept would have garnered about $1.3 million and Secrets just under a half million bucks.

"Unfortunately, in book publishing, the decision on whether to address plagiarism often comes down to the question of... how much a solution will cost," says Lee Wilkins, a professor at the University of Missouri School of Journalism who studies media ethics.

So how credible is the evidence? Gelembiuk, a doctoral student in zoology at the University of Wisconsin, is a proven quantity. He became interested in Posner's case after Slate's Jack Shafer first publicized plagiarism problems this past February 5. Posner resigned five days later, apologized, and blamed the "warp speed of the Internet" for corrupting his reporting.

Gelembiuk, who uses plagiarism software in classes he teaches, wasn't satisfied with the apology. So he ran Miami Babylon through Viper, free online software that scours the Internet to look for copied phrases. It turned up 16 new instances of stolen prose. New Times and author Frank Owen — whose book, Clubland, Posner had heavily plagiarized — found more problems.

Posner's claim about "degrees of plagiarism" struck Gelembiuk as insincere. One key reason: after the New Times' story was published, the grad student caught Posner apparently trying to edit the section about his crimes on his own Wikipedia page.

On April 11, "miamiskull" — the same name Posner uses on his personal YouTube page — deleted a paragraph about evidence that he'd altered or misattributed quotes in Babylon. (Evidence is posted at miaminewtimes.com.)

Gelembiuk alerted Wikipedia and the revisions were undone. But a week later, "miamiskull" again scrubbed the page. Neither Posner nor Lane responded to New Times' questions about the Wikipedia edit.

So Gelembiuk bought ebook copies of Why America Slept and Secrets of the Kingdom and ran them through Viper, which turned up the 19 suspect passages in the 9-11 book and 16 in the Saudi Arabia book.

Most egregious seem to be Posner's theft from Hoffman's book about Timothy McVeigh's bombing. Check out these excerpts:

Hoffman: All resolved to use whatever force was necessary to oust all foreign forces stationed on Islamic holy land. One Arab observer with direct knowledge of the conference said the participants' resolution was "a virtual declaration of relentless war" on the U.S.-led West.

Why America Slept, page 111: All resolved to use whatever force was necessary to oust all foreign forces stationed on Islamic holy land. One Arab observer with direct knowledge of the conference said the participants' resolution was "a virtual declaration of relentless war" on the U.S.-led West.

Many other passages are simple paragraphs taken from news stories that Posner borrows without citing the source in end notes. For example:

The Progressive, August 1995: In the statue's shadow stood three turbaned, bearded men smiling and waving, as one held a bomb and the others burned an American flag. The cartoonist modified Emma Lazarus's famous poem to read: "Give us your tired, your poor, your huddled masses, your terrorists, your slime, your evil cowards, your religious fanatics..."

Why America Slept, page 92: In the statue's shadow stood three turbaned, bearded men smiling and waving as one held a bomb and the others burned an American flag. The cartoonist had modified Emma Lazarus's poem to read: "Give us your tired, your poor, your huddled masses, your terrorists, your slime, your evil cowards, your religious fanatics..."

Or consider the following:

New York Times, October 21 2001: And while the nation was having a good laugh at the expense of Florida's hanging chads and butterfly ballots, Mohamed Atta and Marwan al-Shehhi were there, in Florida, learning to drive commercial jetliners.

Why America Slept, page 149: And while the country enjoyed a good laugh at the expense of Florida's butterfly ballots and hanging chads, Mohamed Atta and Marwan al-Shehhi remained in Florida learning to fly jetliners.

In his May 12 letter to New Times, Lane doesn't dispute the findings. The elderly lawyer and author — whose colorful history also includes representing Jim Jones' People's Temple and then barely surviving the community's massacre in Guyana — declined to talk about whether Posner had plagiarized. "I'm not your witness in this case. The question is improper," he scoffed.

Instead, he suggested: "Have you guys done anything about the fact... that the Central Intelligence Agency and the FBI and other intelligence organizations have assets in the news media and agents posing and working as reporters?"