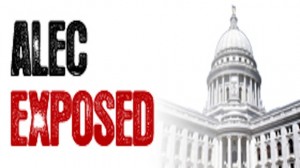 " ... About 2,000 legislators around the country are ALEC members, joined by 300 corporate or private members. Companies such as Wal-Mart, AT&T and ExxonMobil pay between $7,000 and $25,000 to belong, and for various fees such companies can sit on task forces that draft model legislation. ... "

ST. PAUL, Minn. - A proposed constitutional amendment to require a photo ID for Minnesota voters is part of a surge of similar legislation nationwide, much of it springing from a conservative organization that's well-known to politicians but operates largely out of public view.

Six states enacted a strict photo ID requirement last year, and this year lawmakers in 31 other states are considering it. Minnesota's Republican-controlled Legislature actually passed such a requirement last year but Democratic Gov. Mark Dayton vetoed it — prompting its backers to seek an amendment on the November ballot that Dayton cannot block.

The dispute over voter ID is deeply partisan. While Republicans cast it as a common-sense requirement that foils voter fraud, many Democrats say it would make voting more difficult for the poor, minorities, the elderly and disabled — constituencies that often favor them.

The American Legislative Exchange Council, or ALEC, has offered its ideas on voter ID for anyone interested in taking them. Established in 1973, the organization offers state lawmakers a menu of model bills on a range of issues: from business-friendly changes to the civil legal system to reducing regulations backed by environmentalists.

About 2,000 legislators around the country are ALEC members, joined by 300 corporate or private members. Companies such as Wal-Mart, AT&T and ExxonMobil pay between $7,000 and $25,000 to belong, and for various fees such companies can sit on task forces that draft model legislation.

ALEC approved its model policy for voter ID in 2009. Cara Sullivan, a legislative analyst, said in an email that it was "just one of hundreds of models" that ALEC had produced. Sullivan wrote that ALEC has "never campaigned to promote these policies in the states."

Rep. Mary Kiffmeyer, R-Big Lake, is chief House author of the voter ID constitutional amendment as well as the bill Dayton vetoed last year. She's also Minnesota state chairwoman for ALEC. A former Minnesota secretary of state, Kiffmeyer said she didn't use the model bill for her legislation and never worked on the model with other ALEC members.

"I might have a novel brain in my head and have a unique thought," Kiffmeyer said. "I am not dependent upon somebody else's idea."

ALEC provided a copy of its voter ID model bill to The Associated Press. Kiffmeyer's 2011 bill is not identical, though there are several similar sections about ID requirements, counting provisional ballots and issuing a free ID to those over 18 who don't have a valid driver's license.

Tim Penny, a former Minnesota congressman who now teaches at the University of Minnesota, said it's not uncommon for both conservative and liberal groups — whether industries, unions or advocacy groups — to offer prepared legislation to lawmakers from both political parties. He said, though, that he's unaware of a direct liberal counterpart to ALEC, with its wide range of policy interests. ALEC members are "not buying legislation because these ideas still have to be brought back to a legislature and be debated in a process," said Penny, who served in Congress as a Democrat but later shifted to the state's Independence Party. "If the ideas are objectionable, that ought to be discovered."

Doug Chapin, an elections expert at the University of Minnesota, said a voter ID debate that had simmered for years got significant new traction after Republicans nationwide made large gains in legislatures in the 2010 elections. Chapin said there's been large-scale sharing of ideas in these new majorities.

"It's pretty clear that it's becoming a common plank," Chapin said. Republican legislators in 31 states "did not come up with this idea independently," he said.

Five states passed a strict photo ID requirement last year: Wisconsin, Tennessee, Kansas, Texas and South Carolina. In each case, lawmakers integral to passing the bills have either confirmed or reported ALEC ties. A sixth state, Mississippi, enacted a constitutional amendment requiring photo ID in an initiative process begun by a lawmaker reported to have served on an ALEC task force.

Minnesota critics of photo ID point out there are few signs of widespread voter fraud in the state. The Minnesota County Attorneys Association said there were 157 total convictions of voter fraud from the state's 2008 and 2010 elections. Joe Mansky, the Ramsey County elections manager, said the amendment would likely take extra time and money to implement and could prevent some from voting.

Democrats and liberal groups have called the push purely political.

"It's a concerted effort to make it more difficult for people who vote for Democrats to get to the polls," said Minnesota Rep. Ryan Winkler, DFL-Golden Valley.

Democrats complained of ALEC's influence earlier this session. In February, Dayton vetoed four Republican-backed bills that would have made sweeping changes to the state's civil legal system; he said then that three of the four bills were directly influenced by an ALEC manual. When asked about the claim, a Senate GOP spokesman said he could give no immediate comment.

Scott Hargarten, a 25-year-old organizer with Occupy Minneapolis, said his group plans to protest ALEC at the Capitol this month as part of a national action. Hargarten said ALEC became a focus of Occupy after recent news reports on the group and its work.

The voter ID issue "has this much momentum because it increases the powers of corporations, and the powers of the Republican party, at the expense of the citizen," Hargarten said.