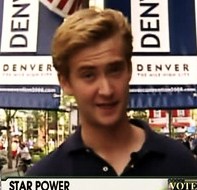 Peter Doocy is not fighting in the US army; but he’s part of the new front in the culture war. He is the son of former weatherman (no, not the radical kind) turned right wing giggle guy Steve Doocy of Fox & Friends. You might remember Doocy from MSNBC’s Chris Matthews show where he appeared on Matthews “Hardball College Tour” which consisted of shows done at various colleges during the 2008 presidential primary season and at which the various presidential contenders were interviewed.

During the question and answer session, Villanova senior and totally rad party guy, Peter Doocy, referenced a video clip in which Hillary Clinto was shown “drinking whiskey with potential voters” and then asked McCain “if she’s finally resorted to hitting the sauce just because of some unfavorable polling?” (Fair and balanced – just like dad!) Doocy then proved himself to be, like his father, quite the yukmeister when he asked McCain if he wanted to “join me for a shot.” Daddy Doocy was so proud of his conservative spawn that he, while beaming, showed the clip the next day. Flash forward to 2010 and Peter Doocy’s 15 minutes of fame has been extended with his Fox News position as “general assignment reporter.” And as part of his “reporting job,” he’s helping dear old dad and his chums cover the Texas textbook “wars.” What’s that saying about the apple and the tree…?

This morning, Daddy Doocy introduced the predictable and one sided segment by discussing how a “textbook battle is brewing” (what is it with right wingers and all the war references?!) in Texas and how this situation will affect textbooks all over the country. He then tossed to his son, Peter, who was reporting from the Austin, Texas building where, tomorrow, there will be a forum on the proposed textbook changes. Doocy spoke of changes to the social studies curriculum and how “controversial” that can be because of differing opinions on what should be included and excluded in this area of study and “that’s kind of scary…” He said that 200 protesters are expected at tomorrow's meeting and “they’re in the know and they’re outraged.” (If he’s referring to Christian fundamentalist creationists, they’re hardly “in the know.”) He said that it was “scary” that most people don’t even know what’s happening in the building behind him.

Daddy Doocy agreed that it is “scary.” Doocy, in introducing Jonathan Saenz, legislative director of the right wing Liberty Legal Institute, said that sonny boy “set it up perfectly talking about some of these outrageous changes where they would remove references to Independence Day, Veterans Day, (his voice rising) Washington, or Lincoln, or Patton.” To his question of who is behind this, Mr. Saenz said “a group of liberal, left wing activists who want to drastically change what our students learn about history and want to rewrite history to fit their agenda.”

Doocy then read the names of three individuals, whose pictures where shown, who are fighting against the attempt by Christian conservatives to control the curriculum. (One hopes that death threats are not, now, being made) Saenz, whose group is all about Christian, conservative ideology, referred to these folks, two of whom are college professors, as “troublemakers.” Saenz claimed that these people “want to attack every aspect of public schools and indoctrinate…public education with their liberal ideology.” Not surpisingly he said “they’re going after Christianity and religion.”

Doocy did say that the other side accuses Saenz and his people of trying to “put their conservative imput onto the textbooks.”

Saenz then claimed for 10 years they had “social studies standards that fairly and accurately talked about our history, talked about the undeniable fact that Judeo-Christian values have had an impact on our law and government…” He asked why Neil Armstrong is being taken out to which Doocy said “good point.” He wanted to know why there is less discussion of Independence Day and more talk about Mary K Ash (a famous Texas businesswoman) and Wallace Amos, a famous cookie maker (a famous black entrepenuer). He said that he didn’t remember if the aforementioned had 1,000 patents like Thomas Edison who’s still waiting to get back in.

Comment: Fox & Friends provides yet another free publicity platform for the religious right which is pushing to have conservative Christian “values” included in the Texas social studies curriculum. It was classic Fox & Friends propaganda in that Doocy’s claims about what might be eliminated from the textbooks is exactly what Jonathan Saenz has already stated. (So much for sourcing!) And while Doocy was braying about the removal of Washington and Lincoln, that’s exactly what the right wing wing recommended in a 2009 report which suggested removal of Washington, Lincoln, Stephen Austin, and Caesar Chavez and replacing them with the “motivational role the Bible and the Christian faith played in the settling of the original colonies.” No mention was made of how Saenz’s pals want to include Newt Gingrich, Phyllis Schlafley, the “moral majority,” the NRA, and Rush Limbaugh while excluding African American SCOTUS judge Thurgood Marshall.

What Doocy and Saenz didn’t tell you is that Neil Armstrong and Independence Day are back in the curriculum. But hey, there a culture war in Texas and Fox & Friends is bringing it! And if the Texas Christian conservatives get their way - now that is "scary!"

Biological Warfare: Battles Under Way In Texas And Louisiana Over Science Education

U.S. History to get a Conservative Bent in Texas Schools

Open Letter to Students of the Texas Public School System ...

Texas Board of Education Chairman is a Creationist

Inside the Creationist Dispute