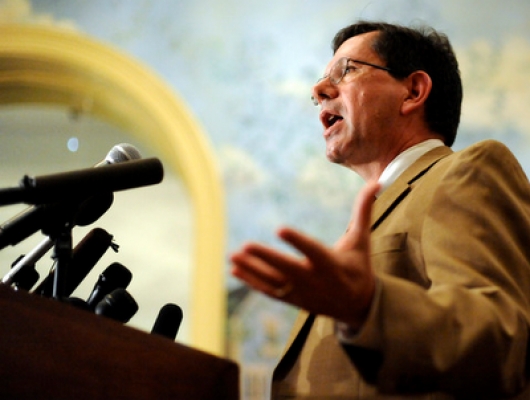 Tea Party Nation President Judson Phillips wants to end voting rights for those who do not own property, ending one-person-one-vote for U.S. senators and revising the Fourteenth Amendment

To the public and the press, Washington, D.C.-based FreedomWorks Tea Party head Dick Armey has attempted to paint the Tea Parties as a movement by "real" Americans concerned (only) about fiscal policy and government debt. He has pooh-poohed evidence of hard-core racists in his movement. And he has pretended that there is not an anti-democratic (small d) bone in the Tea Party body. Such declarations have led some analysts to claim that the Tea Parties constitute some sort of "populist" movement, in which the voice of "the people," however distorted, can be heard.

In a stunning set of declarations aimed at the Tea Party faithful, however, Tea Party Nation President Judson Phillips sounded more like an economic and political royalist. On the November 17 edition of his Tea Party Nation internet radio program, Phillips said:

According to this Tea Party leader, if you rent your house or apartment, then you should not have the right to vote. In his worldview, you simply do not count as much as the homeowners next door. Presumably, if you once owned your house, but lost it in bankruptcy or foreclosure, well then you will probably lose the right to vote as well.

As ugly as all this sounds, it was part and parcel of a larger radio exchange between Phillips and David DeGerolamo, the founder of North Carolina Freedom. NC Freedom is the statewide umbrella for Tea Party, 9-12, and patriot groups in North Carolina. The network is broken into nine regions across the state. It is listed as a chapter of Tea Party Patriots. Nevertheless, NC Freedom leaders have worked closely with Tea Party Nation, including presenting popular workshops on building local organizations at the February 2010 Tea Party Nation Convention in Nashville. And Phillips gave North Carolina Freedom a ringing endorsement, "I love North Carolina Freedom, there is a lot of other groups we're working with, because we all share the same vision and that we work cooperatively. That's one of the beauties of the Tea Party movement."

This declaration comes just two weeks after Phillips pronounced his own theories about President Obama's birth.

Early in their program, the two men discussed immigration politics, including the launch of a boycott campaign by NC Freedom against Durham, North Carolina. The city's decision to accept the Matricula Consular card as identification was the precipitating factor. Phillips also had DeGerolamo explain the "Agenda 21" conspiracy theory to the audience. According to DeGerolamo, "Agenda 21 basically is a United Nations proposal to weaken the country... Immigration is a big portion of Agenda 21, and Sanctuary Cities are a big portion of Agenda 21."

Conspiracy theories aside, Phillips and DeGerolamo had their own special way of holding the Constitution dear to their patriotic hearts, by discussing which parts of it they would like to rip out. Listen

Judson Phillips: "Of course, when people talk, three Amendments that really are the only ones that seriously get talked about getting repealed: the 16th Amendment, for the income tax, and we can only hope that happens; the 17th Amendment for having the appointment of Senators got back to state legislatures; and the 26th Amendment, I believe it is.

Do you know which one that is, David?"

David DeGerolamo: "No, but I know which one I want repealed."

Judson Phillips: "Which one is that?"

This is not the first time DeGerolamo's group has promoted the view that the Fourteenth Amendment should be repealed. As noted in IREHR's Tea Party Nationalism Special Report, NC Freedom publicized a series of seminars conducted by a group calling itself the North-Carolina American Republic. These workshops, entitled "Restore our Republics," promoted the notion that individuals can declare themselves citizens of the North-Carolina Republic--the "real government" that was taken away by the Reconstruction Acts after the Civil War. By these lights, the Fourteenth Amendment is considered unconstitutional. These ideas are derived from the warped constitutionalism of the Posse Comitatus in the 1980s, and groups such as the Freemen and Republic of Texas in the 1990s.

It is not known how many of Tea Party Nation's 35,137 members agree with Phillips contentions that voting rights should be restricted, the Seventeenth Amendment repealed and the Fourteenth Amendment gutted. Nor is it known what percentage of enrolled Tea Partiers and their sympathizers hold such views. We do know, however, that 39 of the 51 members of the Tea Party Caucus in the last Congress wanted to end birthright citizenship as it is found in the Fourteenth Amendment. And with the election of two dozen or more Tea Party-allied congressional representatives, the views of Phillips and DeGerolamo cannot be safely ignored.

Perhaps some responsible Tea Party leaders should clear the air of this ugly, anti-American scent in their ranks.

Judson Phillips is a fool, so all our military personnel, firemen, policemen and elderly who don’t own property can’t vote?

How about all people who have filed bankruptcy can’t vote (like Judson Phillips), or those who fail to answer questions about our country history can’t run for public office (like Sarah Palin or Christine O’donnell), how about that, please.

So what do you think these losers want next, SLAVES?

It’s The Real Thing: The Power of Koch

Tea Party – Time to Fold Up the Circus Tent