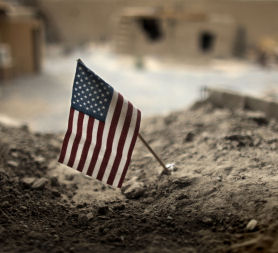 " ... Reports on the Wikileaks documents show how the special forces of Task Force 373 failed attempt to kill al Qaeda leader Abu Laith al-Libi, which ended in the deaths of seven children. Al-Libi was believed to have been a leading training ground for al-Qaida and the Taliban, and appeared in a series of videos featuring al-Qaeda, Ayman al-Zawahiri. ... " - "Task Force 373" | http://usspost.com/task-force-373-13679/

A top secret unit of U.S. Special Forces called Task Force 373 set out on June 17, 2007, in the Patika province of Aghanistan to purposely commit a war crime. Task force 373 is a death squad organized by the NATO coalition in Afghanistan to hunt down targets for death or detention without trial. Details of more than 2,000 alleged leaders of the Taliban and al-Qaida are held on a “kill or capture” list, known as Jpel for Joint Prioritized Effects List.

On that occasion, the target was a man named Abu Laith al-Libi. Task Force 373 believed he was hiding in a remote village in Patika province. The unit was armed with a new weapon known as HIMARS — High Mobility Artillery Rocket System — a pod of six missiles on the back of a small truck.

According to Pentagon war logs recently released by WikiLeaks, TF 373’s plan was to launch five rockets at targets in the village of Nangar Khel where Libi was supposedly hiding and then send in ground troops. The rockets failed to find Libi but killed six men TF 373 claimed were Taliban fighters.

Then, when troops approached the rubble that was once a school, they recorded “initial assessment of 7 x NC KIA,” which translates as “seven non-combatants killed in action.” All of them were children. One of them was still alive: “The Med TM immediately cleared debris from the mouth and performed CPR.” After 20 minutes, the child died. (WikiLeaks War Logs quoted in The Guardian, July 25)

The U.S.-led coalition issued a press release claiming that troops “had surveillance on the compound all day and saw no indications that there were children inside the building.” The release also claimed that Taliban fighters, who supposedly were in the compound, had used the children as human shields.

The bodies of the six “Taliban” were in a completely different building than the school where the children were found. The release suggested that coalition forces had attacked the compound because of “nefarious activity” there, when the reality was they had gone there to kill or capture Libi.

The press release made no mention at all of Libi, nor of the failure of the mission (although that was revealed later by NBC News). Crucially, it failed to record that TF 373 had fired five rockets, destroying the school and other buildings and killing seven children, before anybody fired on them. This was a mission to murder.

The internal report was marked not only “secret” but also “Noforn,” that is, not to be shared with non-U.S. members of the coalition. The wording of the report was very specific: “The knowledge that TF 373 conducted a HIMARS strike must be protected.” And it was. That is, until the recent release of 91,000 secret Pentagon cables by a whistleblower inside the U.S. intelligence establishment.

‘Sources and methods’ of imperialist occupation

Both the Obama administration and the Pentagon have opened a virulent attack on those who released the Afghan War Logs. Secretary of Defense Robert Gates and Admiral Mike Mullen, chairman of the Joint Chiefs of Staff, used a Pentagon press conference on July 29 to vilify WikiLeaks and its editor, Julian Assange, while vowing to crack down on anyone involved in making the documents public.

Additional charges have been filed against SPC Bradley Manning, who is already accused of releasing a video showing a massacre in Iraq. The Army recently moved Manning from Kuwait to Quantico, Va., where it is holding him in prison.

According to the Pentagon brass, the Afghan war logs’ release has endangered NATO troops and Afghan collaborators because they reveal the “sources and methods” of U.S. intelligence units. The generals don’t seem to worry that using death squads against the people of a country that they illegally occupy is a direct violation of the Geneva Conventions and international law. Or that the Afghan people already know from bitter first-hand experience how these horrific war crimes have been committed — and by whom.

What the brass really worry about is that the leaks will undercut political support for the war at home and around the world.

Another slaughter, followed by torture

Another potential war crime was the slaughter of Jan. 12, 2008. After tracking the movements for 24 hours of the man ranked seventh on the Jpel list, Qari Baryal, the coalition established that he was holding a large meeting with other men in a compound in Pashkari. The command sent planes that dropped 500-pound bombs, then ran five strafing runs to shoot those fleeing the scene.

The report records that some 70 people ran to the compound and started digging into the rubble on which there were “pools of blood.” Subsequent reports suggest that the targeted Baryal survived. There was no mention of how many people died or had been wounded.

Numerous logs show Jpel targets captured and transferred to a special prison, known as Btif, the Bagram Theatre Internment Facility. No logs indicate that prisoners were charged or tried. Previous press reports suggest that prisoners have spent years with no legal process in communal cages inside vast old airplane hangars.

Considering how the U.S. ran intelligence operations at Abu Ghraib, Iraq and Guantanamo, it’s likely that detainees are tortured. By December 2009, a total of 4,288 prisoners, some as young as 16, had been held at Btif, with 757 still in custody.

The leaked war logs show that Task Force 373 uses at least three bases in Afghanistan: in Kabul, Kandahar and Khost. Although TF 373 operates alongside Special Forces from Afghanistan and other coalition nations, it appears to be drawing its own troops from the 7th Special Forces Group at Fort Bragg, N.C. It travels on missions in Chinook and Cobra helicopters flown by the 160th Special Operations Aviation Regiment, based at Hunter Army Airfield, Ga.

The release of the Afghan war logs can help mobilize anti-war forces, but it’s important to seize the opportunity it presents. We must redouble our efforts to stop the illegal war and occupation in Afghanistan and bring the troops home. It is encouraging that on Aug. 8 more than 100 anti-war demonstrators gathered outside the Quantico base demanding “Free Bradley Manning” and that the war criminals, especially those at the highest level, be held accountable.

Articles copyright 1995-2010 Workers World. Verbatim copying and distribution of this entire article is permitted in any medium without royalty provided this notice is preserved.

Luke Sommer, one of the “magnificent seven,” exposed the existence of 65 torture centers. A lot of people have a hard time understanding why it is that he and six others robbed a Bank of America branch in Tacoma, getting away with almost $60,000 and then moving to expose the network of clandestine torture centers, most of which were in Afghanistan. Of course, those people in power would want to get rid of him since he violated his classifications; thus the necessity of getting some running and hiding money. This system worked in collaboration with the equivalent of Homeland Security in afghanistan, providing intel on potential targets for elimination ala operation Phoenix in Vietnam, that is supposed to have murdered off 200,000 people. This is why they hate us.