Summary of The Franklin Cover-Up 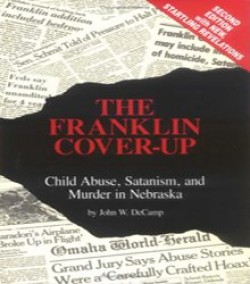 On November 4, 1988 the Omaha Franklin Credit-Union Bank was raided and closed by the IRS and the FBI. The raid and closing were conducted resulting from an audit on Lawrence King?s, the Franklin Credit Union's manager, (see key players page) personal tax returns.

Initially public investigators estimated King had stolen about $4 million from the Franklin Credit Union assets. By the end of their investigation, Officials totaled the missing assets in the tune of $39 million.

Along with the charges of embezzlement, reports came in that the FBI had confiscated child pornography, videotapes and photographs at Franklin Credit Union offices.

In January of 1989 the Nebraska State Legislature constituted a committee to look into the child abuse and drug allegations. Twenty days later Nebraska State Attorney General Robert Spire called a Grand Jury to investigate allegations of what came to be known as the Franklin Case.

By February the formation of the state committe was threatened that their investgation would not receive the full support from local law enforcement. At the same time the Omaha Chief of Police, Robert Wadman, and Nicolas O?Hara, then head of the FBI in Omaha, declared they were unsuccessful in finding any evidence of child abuse related to the alleged perpetrators.

Nearly a year and a half after the doors to Franklin had closed Larry King and his wife Alice were charged wtih 40 counts of federal tax evasion. These charges would later stem to Lawrence, and his wife Alice's indictment on May 19, 1989.

Throughout the spring and into the summer the Franklin Case slowly moved through the court system until in August of 1989 when Gary Caradori (see key players page)was hired as Chief Investigator for the Legislature?s Franklin Committee. Over the next several months Caradori and his committee videotaped hours of victim interviews and exhausted every possible lead.

During those months Caradori met with the FBI and the Legislature to review his investigation. But no matter what he had it didn?t seem concrete enough for the FBI to take any further action. But in a June trip to Chicago with his son Andrew, he finally found what he had been in search of. Rusty Nelson (see key players page) had met with Caradori in Chicago, giving him photographs that could easily indict major suspects in the case. Tragically, neither Gary nor his son made it back from Chicago alive. Caradori?s single engine plane went down in Aurora, Illinois, where Robert Wadman had taken over as Chief of Police. Witnesses said that they had seen a flash of light and that the plane came apart in the air. More unusual was that pieces of the plane, and all of Caradori?s personal items were missing when the Police arrived at the crash site.

Shortly after Gary Caradori?s death Troy Boner (see key players page ) and Danny king, two of the four main witnesses recanted their testimonies. After the recants the case started to fall apart for the prosecutors. The two witnesses who stood by their testimonies were later charged with perjury, which was unheard of for the age of the witnesses. Witness Alisha Owen was indicted on eight counts of Perjury, while the other witness Paul Bonacci was indicted on three counts of Perjury. Both Owen and Bonacci were sentenced stiff jail time, which both served in full.

Days after Bonacci and Owen's indictments, the Grand Jury threw the whole case out, labeling it a "Carefully Crafted Hoax," (See related publication page) issuing an unusual and unprecedented report.

While years have passed, many Omaha natives have put this dark part of Omaha behind them, but many stones went un-turned. Throughout the Franklin Case. John DeCamp (see key players page) worked alongside Senator Loran Schmit as his advisory lawyer, but after the case fizzled he started investigating the case on behalf of different victims. After years of investigating the case DeCamp wrote the Franklin Cover-Up (see the Franklin Cover-Up page), which serves and an invaluable resource in the education of this forever unraveling case.

In 1999 John DeCamp represented Paul Bonacci in a lawsuit filed against Lawrence King. The judge presiding over the case finally handed Franklin prosecutors their first legal victory, awarding Bonacci $1 million, to be paid by Larry King himself.

DeCamp and others continue to fight for justice, working to expose those responsible for these heinous crimes.