” ,.. Illegals everywhere today! So many spicks makes me feel like a speck. Grr. Where’s my gun? … “ 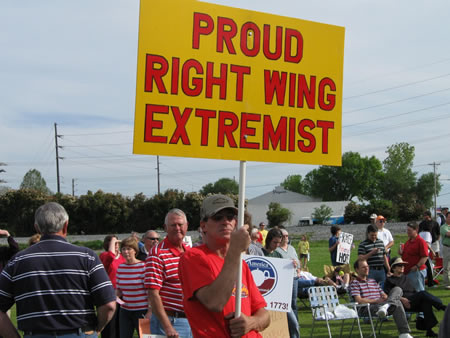 CityBeat first wrote about the Springboro Tea Party last month, detailing the agenda for a rally planned Saturday that’s heavy with speakers from the John Birch Society and movies about far-right conspiracy theories.

Now the Tea Party leader organizing the event, Brian “Sonny” Thomas, is under fire for racist and vulgar comments he posted on Twitter, which has prompted several politicians to cancel their appearances at the rally.

Also, Thomas is wanted by police for allegedly violating a protection order by showing up unexpectedly at the house owned by the mother of his son.

Politicians began dropping out of the rally once they learned of comments Thomas tweeted a few weeks ago while at a health care reform protest in Washington, D.C. After he was heckled by immigration reform supporters, Thomas wrote, “Illegals everywhere today! So many spicks makes me feel like a speck. Grr. Where’s my gun?”

Thomas later said the comments were “facetious” and a reference to “Spicks and Specks,” a 1966 song by the Bee Gees.

The controversy has been noted locally (by The Dayton Daily News), nationally (by CNN) and on several political blogs.

The politicians who canceled said they were surprised by Thomas’ tweet but they shouldn’t be, at least not if they had been paying attention.

“Let it be on the record, I detest and denounce any Fed, State or local gov’t interloping in my healthcare decisions whatsoever! I’m 110% against anyo (sic) of this fucking ObamaCare and will not acknowledge that son of a bitch either until he proves he’s a legally binding person who sits in that office. There’s a reason it’s called the White House.”

This week, Thomas became wanted by Franklin police on a first-degree misdemeanor charge for allegedly violating the protection order on April 12.

Tea Party leaders have consistently offered excuses for bad behavior at their rallies, whether it be threatening an African-American TV news reporter at Fountain Square or hurling slurs at Congressmen Barney Frank and John Lewis in Washington, D.C.

Let’s see how they explain the latest incident. Regardless, thoughtful people would pause to question what about the Tea Party movement elicits such ugliness.