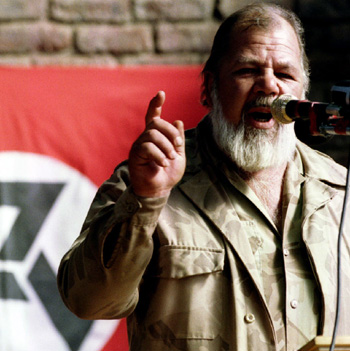 This seems like a quiet place," I remember saying to Adam, the bartender at the Ventersdorp Hotel.

"Ya, it is," the stocky Afrikaaner replied in an unexpectedly squeaky voice, "except for the explosions."

Explosions? I was surprised at that. This was back in April 1994, just two weeks ahead of the first multi-racial elections in South Africa. Ventersdorp was a last hold out, a white supremacist bastion in the rolling, prairie-like farm country west of Johannesburg.

In 1994, Ventersdorp was also notorious as the home of the Afrikaaner Resistance Movement, or AWB, an organization that refused to accept that South Africa's apartheid laws and the white minority rule they propped up were coming to an end.

The week before it was the local offices of the governing National Party, the party that was then dismantling white rule. Then it was a bar frequented by the black community. The week before that it was a restaurant.

Another man at the bar told me that the restaurant bombing happened after the AWB leader, Eugene Terreblanche, was kicked out of the place for starting a fight. Terreblanche apparently told the owner, you've made a big mistake, the man tells me. And that night the place exploded.

Guns on the bar

Terreblanche, who was murdered last Saturday, allegedly bludgeoned to death by two black farm hands after he refused to pay them, was sitting at the far end of the bar from me that night, 16 years ago. He was a barrel-chested man with piercing blue eyes and a long, starched-looking white beard. Set on the bar in front of him was a .22 calibre hunting rifle, a weapon that wasn't out of place in an establishment like this. In fact, in this dimly lit room, almost everyone had a handgun or rifle on the bar or table in front of them. Everyone in the bar was also white, even the bartender Adam.

That was a notable exception in the rapidly changing South Africa of 1994. My brother and I, who were backpacking around South Africa at the time, stood out the most, clearly foreigners in a very local establishment. The only other non-local was a German man, in town selling tractors, and who was then focused on getting himself very drunk, very quickly.

Shortly after we arrived, Terreblanche entered the bar and began holding court, his voice booming in his native Afrikaans language. A herd of white farmers, mountainous men in khaki, circled around, hanging on his every word. 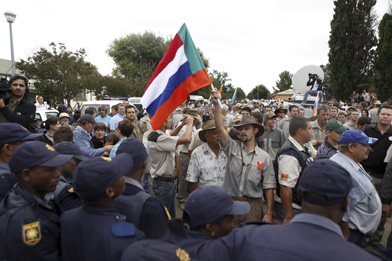 Terreblanche was once an actor — you could see that in his mannerisms — and what spewed out was his usual stew of racism and demagoguery, which he used to rally thousands of supporters at demonstrations.

More recently he had been a farmer. But by 1994, with $20 monthly membership fees pouring into the AWB's coffers from some 70,000 anxious South African whites, he was suddenly quite prosperous. He bought back the family farm his brother lost to bankruptcy and Adam told me that Terreblanche's bar bill as well as other expenses in town were covered by the AWB. But with the historic elections approaching, there was a growing sense of desperation within the movement.

A year earlier, the AWB had attacked the constitutional talks between F.W. de Klerk's National Party and Nelson Mandela's African National Congress, crashing into the conference centre in an armoured vehicle and slapping around delegates. Then, just months before the election, hundreds of AWB paramilitaries, led by Terreblanche, invaded a black homeland, tooling around in pick-up trucks and shooting black pedestrians, part of an effort to push for a whites-only homeland within what would be the new South Africa.

Heavily armed, but disorganized, the AWB invasion failed dramatically. A handful of AWB members were shot dead by black policemen, right in front of the international media. The invaders looked cowed and frightened and the incident left an indelible, pathetic, image of an impotent organization trying vainly to turn back the clock. 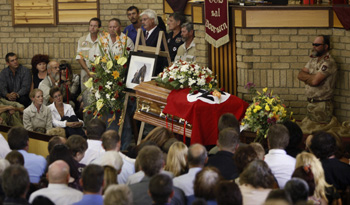 Even in the bar of the Ventersdorp Hotel, with Terreblanche holding court, there was a sense the fight was lost. Johann, a former mine-worker, told me that he has stopped worrying about the elections or black majority rule.

"Ah, you know, this country is going to be alright," he said. Things will be rough for a few months. But after that it will begin to improve. In three or four years it will be good again."

As if sensing this mood, the German tractor salesman, a South African resident, begins harassing Terreblanche at the far end of the bar.

"It won't work," he bellowed. "Your race war won't happen. The whites won't unite. The Boers and the English can't agree on anything. They'll never fight together against the blacks."

Terreblanche bellowed back in Afrikaans, defiantly insisting whites were the rightful guardians of South Africa, that this was their land. And then Terreblanche pointed directly at me, and said, "I will say this in English for the benefit of the man at the end of the bar. The whites will unite and they will fight." Mindful of the rifle in front of him, I pretended to take a sudden interest in the Lion Lager poster hanging behind the bar.

But the German was undeterred. The two men argued on and on until, at one point, the German rammed his arm in Terreblanches face in a Nazi salute, with his finger under his nose a la Adolf Hitler.

"Eugene," he bellowed, sounding like Arnold Schwarzenegger. "The whole Seig Heil thing, we tried it. It just won't work." At that point, Terreblanche fled from the bar, out the door into the street. He was so flustered that he left his rifle behind on the bar. Adam, the bartender, went running after him, rifle in hand. But we didn't see him again that night.

And of course South Africa's whites didn't unite, fight or do much of anything other than get on with their lives along with everyone else in the new South Africa. Terreblanche faded into the obscurity he deserved, popping back into the headlines briefly when he served a three-year jail sentence for the attempted murder of a farm worker. It was only again this week that he began to show his old divisive magic, stirring up fears of racially motivated attacks in retaliation for his death.

But those fears, like his dreams of a race war and a white homeland, haven't happened.

Even in death, Terreblanche has proved to be an anachronism. And that is to the great credit of what South Africa has become since the end of apartheid and that historic election in 1994.