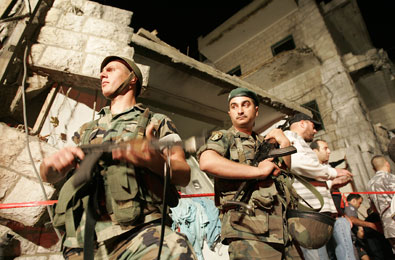 "WASHINGTON (AP) - The Bush administration has added an Islamist group blamed for major fighting at a Lebanese refuge camp to its list of 'international terrorist' organizations.

"The Associated Press has learned that the al-Qaida-inspired group, Fatah al-Islam, is being blacklisted. It's suspected of having LINKS WITH SYRIA. ... "

"Fatah al-Islam, Suleiman said, 'is NOT SPONSORED BY SYRIAN INTELLIGENCE, nor it is backed by Lebanese government circles. It is a branch for al-Qaida which had been planning to use Lebanon and Palestinian camps as safe haven to launch its operations in Lebanon and abroad.'

"Some Lebanese government officials had alleged the Fatah al-Islam group holed up in the Nahr al-Bared camp was created by Syria. ... "