Shocking Revelations of US Business and Nazis

A review of Trading with the Enemy: An Expose of the Nazi-American Money Plot 1933-1949, by Charles Higham. Its claims of US corporate complicity with the Blitzkrieg are spectacular and much debated. 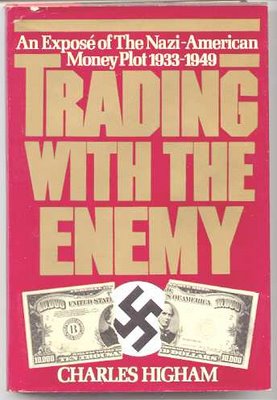 Americans are unceasingly reminded of the shared memories of the self-titled “Greatest Generation” that beat back the Nazis and saved the world from fascism. Is there another side to this heroic narrative? Although historians generally commend the United States as an instrumental force behind the undoing of Hitler’s Nazi regime, many prominent American companies and citizens knowingly aided the inception and military efforts of Nazi Germany.

The text, Charles Higham’s Trading with the Enemy: An Expose of the Nazi-American Money Plot 1933-1949, provides this subject with a significant degree of depth. The work is groundbreaking in the information it presents. Trading with the Enemy has spurred new public dialog and research among historians. Although this book involves similar types of activity to other books in the field, it has a markedly different approach and methodology. These differences present a challenge to researchers and the public in gaining insight into the big picture of this sordid past.

Trading with the Enemy casts a long shadow on the study of World War II era US corporate activity in Nazi Germany. Published in 1983, the information presented in the text has a continuing impact on the study of its subject matter. Like Edwin Black’s IBM and the Holocaust, Higham’s text also lays out an extensive array of details for the reader to digest.

Higham’s thesis is also just as blunt: Many US financial and industrial figures knowingly aided Nazi war efforts. Higham supplies a selective bibliography to support his claims and provides copies of a few key primary sources at the end of the book. Trading with the Enemy is organized by business, exploring the activities of individuals and their related enterprises in each section chronologically.

Higham closes the text by detailing how many of the accused Nazi collaborators covered up their activities at the war’s end. As an author who focuses mainly on the lives of famous personalities, such as Katharine Hepburn and Howard Hughes, it is unusual for such a detailed treatment of this topic to emerge from this catalogue. Higham states that he became interested in the subject of American collaboration with Nazis while researching Errol Flynn, who he also accuses of Nazi connections. Regardless of how it was formulated, the information presented in Trading with the Enemy has been the subject of historical discussion, and at least one lawsuit employed to bring more details to light.

As stated earlier, Higham details each business individually in his text. Trading with the Enemy begins with the Bank of International Settlements in Basel, Switzerland. Higham weaves a narrative of how the bank became controlled by confidants of Hitler and that its original purpose of disbursing reparations from Germany following World War I was subverted into a mechanism for funneling money into Nazi coffers, with the help of willing American counterparts.

He continues this theme by exploring the financial connections between New York’s Chase bank and Nazis in Paris. Higham’s argument here is that Chase set up branches in Vichy France with the specific purpose of doing business with the Third Reich. It is important to note that as in the first section, Trading with the Enemy gives credit to American officials who became aware of such dealings and tried to stop them through their various offices, such as Treasury Secretary Henry Morganthau. However, each section invariably ends with the perpetrators escaping justice.

In the next several chapters, Trading with the Enemy tackles the involvement of heavy industry starting with Standard Oil of New Jersey and ending up with iconic American giants, General Motors (GM) and Ford Motor Company. Interspersed in this section, Higham also levels accusations against International Telephone and Telegraph (ITT) for its alleged dealings with the Nazis. Essentially, Trading with the Enemy accuses Standard Oil of New Jersey for supplying fuel to The Third Reich while Ford and GM were building military vehicles to advance the Nazi agenda of conquest. Higham blames ITT for supplying communication equipment, fuses for munitions, and involvement in research and development of rocket technology.

Contained in this central section of the book, Higham spends a great deal of time describing the interactions between the various CEOs of these corporations and their Nazi counterparts. The author takes special note to show that some US government officials were aware of their activities, but their investigations were inevitably eclipsed by the wealth and influence these would be collaborators had. This ultimately leads to Higham’s final third of the book, were he details the fate of the personalities involved and how they were able to obscure their activities and avoid prosecution.

Trading with the Enemy utilizes a selective bibliography and a few primary source documents at the end of the text to back up its claims. The book does not contain citations, though it does reference some of the bibliographic material within the narrative. The primary source documents have the common characteristic of generally implicating the corporations mentioned earlier. Many of them are memorandum from US Treasury Secretary Henry Morganthau, who as noted earlier, was a key figure in investigating American Nazi collaboration.

When it was released, Trading with the Enemy received little fanfare. In the intervening years since then, however, much more attention has been paid to the allegations presented in the text. In 1999, Michael Ravnitzky, an American lawyer that specializes in Freedom of Information Act cases, requested the source documents used for Higham’s book at the Nazi War Criminal Records Interagency Working Group. This action brought more attention to the text, which had been out of print. A new version has since been republished in 2007.

Trading with Enemy and other texts in the field diverge far more than they converge. However, it is important to note the similarities between this book and other texts. The most significant aspect Higham’s work share with the others is its tone. Though Trading with the Enemy takes far more liberties in narrative style, the reader gets the unmistakable impression that they are unsympathetic witnesses to such nefarious activity. The book does not provide a cold clinical impression; Higham remains firmly judgmental. Consequently, the text is far more appealing to the sympathetic reader’s ire. The work also internalizes the dominant historical narrative. The underlying theme of the book references the polemical nature of the US vs. Nazi as Good vs. Evil and turns it on its head.

The differences between Trading with the Enemy and other books in the field are stark. Rather than appearing as a well sourced piece of historical literature, Higham appeals to the tabloid style that is much more popular among conspiracy theory magazines and websites. To be fair, this work may have been meant for a different audience than those in academia. However, is it safe to assume that such a subject should be addressed without a foundation in rigorous scholarship? This comparison draws out the problem inherent in much political literature: That consideration for an audience can come into direct conflict with the need for academic legitimacy.

Trading with the Enemy has a problematic relationship with its sources. Given its loose narrative style, it is sorely in need of endnotes, footnotes, or other reference to its supporting information. Additionally, the book only contains a selective bibliography, leaving the reader to wonder what was not included. As stated earlier, some copies of primary source documents are included at the end of the book, but they are far too general to constitute the forceful accusations in the text. Any serious researcher willing to verify or disprove Higham’s points faces the prospect of redoing his research in order to expose the facts.

Higham’s work is troubling, not just because of the difficulty in verifying the information in this work, but for the study of the subject as a whole. As stated earlier, American assistance to Nazi Germany is a contentious issue because it runs counter to the generally accepted story of World War II. Therefore, it remains important for all stories stemming from this countervailing historical narrative be as clear and well sourced as possible.

Unfortunately, Higham’s work is not easy to classify here. Many of his points such as those on GM and Ford have been verified by newer and more academic texts, such as Working with the Enemy by Billstein, et. al. Additionally, his work has been cited in other academic journals on this subject. The only solutions to the problem presented by Trading with the Enemy appear to be clarifying each individual point, a haltingly cumbersome task, or requesting the author provide foot or endnotes. Neither of these options are palatable.

Trading with the Enemy remains an important book for several reasons. First, it is one of the more well known texts on the subject of American assistance to the Third Reich. As the study of this subject expands, this book looms large as a reference point for further research. Trading with the Enemy is one of the few texts that engage the entire landscape of American interaction with the Nazis. This is a meaningful development. The entire field is in need of reappraisal to understand the intertwined nature of global business interactions, especially as they relate to large historical currents.

The numerous documentaries, cable channels, books, and magazines are a testament to the growing public interest in World War II. As more information becomes available on American involvement with the Nazis, it is imperative that it be done with clarity and academic rigor. Much of the popular media available in the US today still conveniently omits the stories explored here. Regardless, World War II remains a pivotal event that diminished some powers and elevated others, creating a new world order. We live in its remnants today. In order to understand our relationship to these events, they must be faced with the utmost clarity, even if these realities are heartbreaking, horrific, and contradictory.