The Tarrant Appraisal District's concession is at the heart of a settlement reached with the Newark-based television evangelist's ministry last week. KTVT-TV of Fort Worth and Dallas reports the district also agreed to drop its requirement of salary information on the ministries' directors.

In December 2008, a district board ruled the ministry's jet lacked tax-exempt status. It also denied a protest from Copeland's attorneys because the ministry refused to release salaries of directors, including Copeland and his wife.

Copeland's ministry is based on a 1,500-acre campus behind an iron gate on Eagle Mountain Lake, about 40 miles northwest of Dallas. It includes a church, airstrip, hangar for its aircraft and a $6 million lakefront mansion. 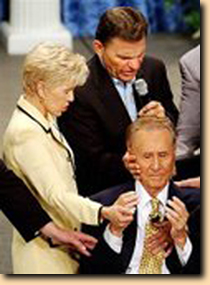 "...Kenneth Copeland Ministries (KCM) announced today that it has partnered with several ministries to send a flight to Haiti with $2.7 million of medical supplies, and 7,000 pounds of much-needed antibiotics."

The only thing KCM actually stated above that they were doing was "sending a flight to Haiti." They did NOT explicitly state WHO supplied these medical supplies, or even WHO paid for them. These missing elements seem to actually be tacit admissions of yet another probable humanitarian aid fraud.

I wrote the book about KCM's Hurricane Katrina disaster missions: "Angel Flight 44" (which is now off the market, except for used copies). It details how Glen Hyde's Douglas Super-DC3 airplane was often loaded with medical supplies furnished by McKesson Pharmaceutical. While it is true that the original "AF44" aid missions flew tens of millions of dollars worth of medical supplies to Louisiana, it is also true that NEITHER Kenneth Copeland NOR his ministry paid for ANY of those supplies.

After that, according to my information, Glen Hyde's airplane sat on the tarmac of Denton Airport in Texas gathering bird poop from August of 2006 until February 2010--it was not helping anyone (as Copeland had pledged). Once we openly documented Copeland's broken promises, however, Copeland apparently found new "motivation" to get that airplane flying again; and the required FAA C-check and maintenance was recently performed to permit this Haitian flight.

Actual costs? Mr. Hyde indicated back in 2007 that it would take about $20,000 to get the airplane legal and mechanically able to fly; we can add to that another $20-30k for fuel and flight expenses. Thus, we can safely estimate that KCM's share of this Haitian flight's costs was likely NO MORE than what they typically spend on jet fuel for the Copeland family vacations (using one of the jets from KCM's fleet.)

Nevertheless, we now see KCM issuing a press release that is worded in such a way as to IMPLY that they (along with the five partners named) funded a multi-million dollar aid mission, when in fact the omitted details seem to reveal otherwise. In short, it would appear that KCM is merely trying to get $2.7 million worth of "humanitarian aid credit" through a publicity stunt, while actually spending a minuscule fraction of that amount to merely send the aid to the desperate Haitians.

Of course, Kenneth Copeland could PROVE what they actually spent on this mission by ordering his staff to publicly release copies of verifiable receipts, bank statements, (and etc)...but don't hold your breath. MinistryWatch.com, a Christian financial integrity ministry, has been trying to encourage KCM to demonstrate biblical transparency in their finances FOR YEARS without any success. If the Copelands start providing financials to the public now, it might create a precedent for transparency...and they cannot have that!

On the other hand, compare KCM's lack of financial accountability with biblical examples (e.g. Ezra and Nehemiah's handling of funds donated to rebuild Jerusalem, and Paul's financial transparency with the offering being sent by the churches to the poor saints in Jerusalem). Why does KCM not follow the Bible's clear protocol? Simple. Jesus said it is because, "their deeds are evil" (note John 3:19-21). Consider for example...

In 2006 KCM paid $13.3 million to its executive staff (who are mostly family members), out of a $100 million budget. This was reported by CBS based upon Tarrant County documents filed by KCM. In short, KCM paid about a dozen executives OVER 13% of their ministry budget. This is considerably MORE than the highly publicized 10% that KCM claims is being divided up among the MANY ministries they support.

Since Jesus said, "Where your treasure is, there will your heart be also," can we safely assume the Copeland family's "heart" is in their own compensation MORE than in giving to those truly in need? It certainly seems so...fraudulent publicity stunts, notwithstanding.