Starting on April 6, the German Air Force (Luftwaffe) bombed Sarajevo and Belgrade for four days and three nights. According to German reports, Sarajevo was bombed to ruins, while Belgrade sustained heavy damage. German ground troops (Wehrmacht Heer) moved in, and Yugoslavia capitulated on April 17. Once the kingdom of Yugoslavia was conquered by Nazi forces, Serbia became a Nazi puppet state led by the régime of General Milan Nedić, while Bosnia became annexed by Ustasha controlled Nazi puppet state of Croatia.

Soon thereafter, the Croatian anti-fascist leader Josip Broz Tito organized the first multi-ethnic resistance group in Europe, the Partisans, who fought against the Nazis and their collaborators – Chetniks and Ustashas. According to Tito, “Jews played a leading role in the founding of his resistance movement.” The leading figure among them was Moshe Pijade (Moša Pijade).

Majority of Serbs in the area took up arms and joined the Nazi-collaborationist Chetnik forces led by General Draza Mihailovich. Though initially fighting against the Nazis, the Chetniks signed numerous documents of collaboratioin with the Nazis. Assisted by Germans and Nedić’s regime, Mihailovich’s Chetniks embarked on a campaign to exterminate Bosnian Muslims, Jews, and anti-fascist communists (Partisans). The intelligence reports obtained by the Soviet government in WWII shows that Milan Nedic “agreed to supply $200,00 a month plus 3,000 rifles, 3,000,000 rounds of ammunition and 500 machine-guns” to Mihailovich … all obtained from the Germans.”

As part of his genocidal policies, General Mihailovic issued the so called “Instructions” (“Instrukcije”) to his commanders on December 20, 1941 to fight for “the creation of Greater Yugoslavia, and within it Greater Serbia, ethnically clean within the borders of Serbia, Montenegro, Bosnia and Herzegovina, Srem, Banat, and Backa” and to ‘cleanse’ (destroy) “all national minorities [including Jews] and anti-state elements from state territory“.

Further, Mihailovic asked his commanders create “direct common borders between Serbia and Montenegro, as well as Serbia and Slovenia by cleansing the Muslim population from Sandzak, and Muslim and Croat populations from Bosnia and Herzegovina.” Mihailovic planned to settle “areas cleansed of national minorities and anti-state elements by Montenegrins” whom he considered to be ‘nationally patriotic’ and ‘honest.’

“All Moslem villages in three mentioned locations [municipalities of Pljevlje, Cajnice, and Foca] were burned down, and not even one home remained intact…. During military operations, we engaged in total destruction of Moslem population without regard to their sex or age. Our victims include 22 dead, of which 2 by accident, and 32 wounded. We killed about 1,200 Muslim soldiers and about 8,000 of their women, elderly and children.”

The Chetniks financed their operations, particularly ethnic cleansing and genocide over the Bosnian Muslim population, through rescue efforts of Allied and Nazi pilots downed over Yugoslavia. Allies paid Chetniks in gold for each successful rescue (Operation Halyard), while Nazis paid them in arms and ammunition.

The Yugoslav Partisans in Bosnia also rescued Allied pilots and were paid in gold for each rescue, just like Chetniks. Maj. Linn M. Farish parachuted into the wild Bosnian hinterland Sept. 19, 1943, to join the British-American mission to Marshal Tito’s partisan headquarters. He went to Josip Broz Tito for assistance in rescuing fliers bailing out of crippled planes over Yugoslavia. The partisan leaders responded by sending this order to every brigade headquarters: “American fliers must be rescued from enemy elements by force of arms if necessary.”

All the major military offensives by the antifascist movement of Yugoslavia against Nazis and their local supporters were conducted in Bosnia-Herzegovina and its peoples, particularly Bosnian Muslims, bore the brunt of fighting. A majority of Bosnian Muslims joined anti-fascist forces in World War II, and a small number joined short-lived SS Handzar (Handschar) division. As Džemaludin Ibrahimovic, a Muslim priest in the Handzar division, explained:

“When we heard that we can voluntarily register in a German unit, many took advantage of that opportunity. In Bosnia, at that time, we had a positive memory of the Austro-Hungarian monarchy. So we felt inclined to serve in the German unit. We perceived Germany as a symbol of purity, order and discipline. At that time, we knew nothing about the concentration camps and the persecution of Jews, because majority of Handzar’s volunteers came from the poorest areas of Bosnia, mostly from the countryside. It should be taken into account that the Nazi collaborating Chetniks in eastern Bosnia massacred thousands of Muslims, so we wanted to take the opportunity to defend ourselves.” 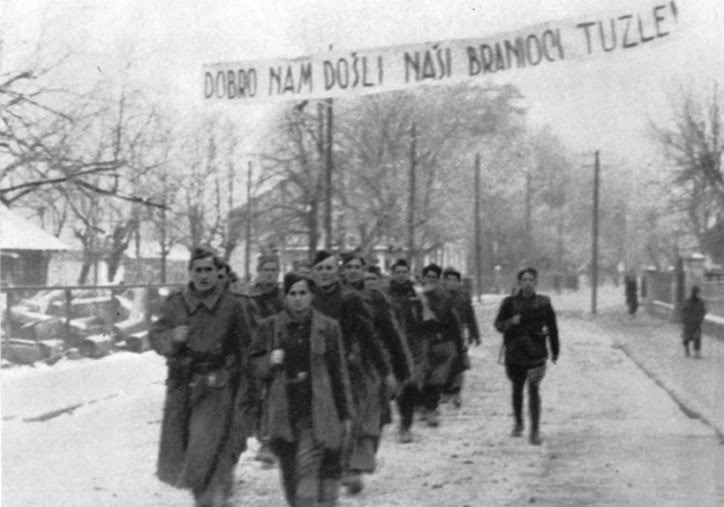 The most notable Bosnian Muslim anti-fascist brigade in World War II was the “16th Moslem Partisan Brigade” that inflicted heavy casualties on the German and Italian forces, particularly in battles for Drvar, Livno, port of Zara (Dalmatian coast), Bihac, Tuzla, Sarajevo, and eastern Bosnian front. This was the strongest anti-fascist Bosnian Muslim brigade with 15,000 well-armed guerrillas under the command of Josip Broz Tito.

The 16th Moslem Partisan Brigade is credited with a partial destruction of collaborationist Muslim Handzar division. Bosnian Muslims led by Tito inflicted heavy casualties on Handzar in battles around Tuzla in February 1944.

Throughout the war, the Chetnik movement remained almost completely inactive against the occupation forces, and increasingly collaborated with the Axis, losing its international recognition as the Yugoslav resistance force.

Major William Jones, who spent twelve months with Tito’s Partisans in Bosnia, wrote in his book that he witnessed captured Ustasha and Chetniks members admit collaborating with Nazis against the anti-fascist Partisans:

“We were allowed to see and question them, which we did with the aid of our own interpreter. There were sixteen prisoners in all: seven Italians, three Ustashi, four Chetniks and two Domobranci. They told us that they had all been fighting together under Italian officers in defence of a section of railway which the Partisans had recently attacked. The Italians were in full uniform, the Ustashi, Chetniks and Domobranci in part uniform, some with tunic, others only puttees or a pair of Italian pants; their old civilian clothes completed their attire. All were without headdress when we saw them. The Ustashi and Domobranci claimed Pavelic as their leader, and the Chetniks declared themselves to be followers of Draza Mihailovic…”

It was only after the withdrawal of the Germans and the overthrow of Milan Nedic (October 1944) and Ante Pavelic (May 1945) that the Serbs in Bosnia and Herzegovina began to join the anti-fascist Partisans in large numbers. These new Partisans included tens of thousands of former Serbian Nazi collaborators responding to Tito’s promises of amnesty.

After World War II, General Draza Mihailovich was arrested and put on trial before a Yugoslav military court on charges of both collaboration and treason. Mihailovich admitted he collaborated with the Nazis.

The military tribunal acknowledged Mihailovich participated in rescue efforts of downed Allied and Nazi pilots, but concluded his guilt was established on the overwhelming evidence against him, documents he and his subordinates signed while collaborating with Nazis.

After the prosecutor confronted him with a series of documents attesting to his collaboration with Nazis, Draza Mihailovich confessed he was a Nazi collaborator:

“What do you call this?” demanded the prosecutor after reading the letter.

“Intrigue,” replied Mihailovich. [*definition of 'intrigue' = A secret or underhand scheme; a plot.]

Q: “Is that collaboration?” [the prosecutor asked]

A: “Yes” [was the reply from Mihailovich]

Q: “Is that your collaboration?”

“The first Chetnik units came into being shortly after the Yugoslav army’s surrender to the Germans in April 1941, on the initiative of Col. Draza Mihajlovic, an officer of the Yugoslav general staff. … The Chetniks’ struggle with the invaders came to a complete stop at the end of 1941, and gradually evolved into cooperation with the Italians and the Germans against Tito. … The Chetniks became [Nazi] collaborators and joined the forces fighting the partisans. After the occupation of Serbia by the partisans and the Red Army, the Chetniks were hunted down. Shortly after the end of the war, Mihajlovic and his men were captured and brought before a Yugoslav national tribunal. Most of them were hanged. At the initial stage, there were some Jews among the Chetniks, but when it turned out that the Chetniks were not fighting the invaders and their collaborators, and in fact were inclined to cooperate with them, the Jews switched to the ranks of the partisans. As the Chetniks increased their cooperation with the Germans, their attitude toward the Jews in the areas under their control deteriorated, and they identified the Jews with the hated Communists. There were many instances of Chetniks murdering Jews or handing them over to the Germans.”