"... Despite all that the Jews had suffered under Germany, in many areas of Europe anti-Semitism increased after the war. In parts of Hungary and Poland, communities made homeless by the conflict were persecuted and sometimes even annihilated by Jew-baiters. And so the war continued, dreadfully, into peacetime. ..." 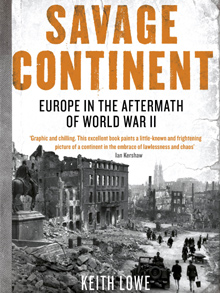 In the winter of 1948 Graham Greene visited the “smashed, dreary city of Vienna” to begin work on his screenplay for The Third Man.

The Austrian capital was divided into mutually antagonistic Cold War zones occupied by Russia, America, France and Britain. Everywhere Greene went he   saw evidence of the moral and material ruins of Hitler’s collapsed empire. Tensions between East and West increased later that year when Stalin began to blockade Berlin. The Allied forces, fearing a Red takeover, improvised an irlift for beleaguered Berliners. A sense of insecurity now infected the highest levels in Washington: Americans spoke fearfully of Moscow’s atomic   capabilities and asked how long it would be before a Red Square appeared in the heart of democratic Europe.

Wretchedly, the world conflict did not end with Hitler’s suicide in the   bunker. In this remarkable new history of post-war Europe, Keith Lowe chronicles lingering antagonisms and resentments. In eastern Europe especially, the keynote of liberation was often unimaginable violence. The abiding symbol of “freedom” in future Soviet territories was the open cattle car shunting cargoes of displaced persons – DPs – away from their birthplace. My mother, a refugee from Stalinist oppression in the Baltic states, fled her home in Tallinn in September 1944 to make her way on foot through the catastrophically razed Third Reich to a DP camp near Bremen in Germany, from where she reached England in 1947. Her story is not untypical of the many accounts of displacement and exile recorded here by Lowe. 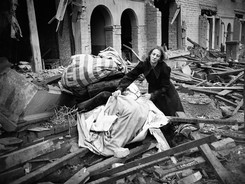 According to Lowe, the liberation of eastern Europe in 1944-45 was only rarely a heroic prelude to healing and renewal. Liberated civilians often viewed their wartime liberators with anxiety, even loathing. Jewish prison camp survivors, bereft of food and family, initially welcomed the Allied military, yet resentments soon set in. When British troops entered the Nazi camp of Bergen-Belsen in April 1945, it seemed the Third Reich’s worst secret was out: the piles of naked, decomposed corpses showed that Germany had departed from the community of civilised human beings. Bergen-Belsen lent a moral clarity to the war – this is what we have been fighting for. Yet it would be many years before the extent of Hitler’s genocide emerged in all its peculiar horror, says Lowe; in the meantime the Jews in the camp were regarded by their “liberators” as merely another mishap of everyday Nazi violence, and were treated accordingly.

Unlike German revisionist historians (preeminently Ernst Nolte), Lowe does not argue for a supposed moral equivalence between Hitler’s extermination of the Jews and the earlier Stalinist extermination of the kulaks. The industrial exploitation of corpses and their ashes was a uniquely Hitlerian infamy. Given the millions of anti-Semitic Germans who had applauded the Hitler regime, however, Lowe is understandably impatient of those same Germans who showed such defensiveness and self-pity at their own hour of liberation.

Despite all that the Jews had suffered under Germany, in many areas of Europe anti-Semitism increased after the war. In parts of Hungary and Poland, communities made homeless by the conflict were persecuted and sometimes even annihilated by Jew-baiters. And so the war continued, dreadfully, into peacetime.

One of Lowe’s most harrowing chapters documents the mass expulsions of ethnic Germans from post-war Czechoslovakia and Poland. Having been viewed by Hitler as socially inferior “useless mouths”, Poles in particular were determined to exact retribution. An estimated 11 million Germans were ruthlessly ejected from Polish and Czech territories between 1945 and 1949. Many of them fetched up in the British zones of Germany where, riven by feelings of pain and foreboding, they attempted to start new lives. (As Lowe points out, the only place in post-war Europe that welcomed Germans was Germany itself.)

Remarkably, only at the war’s end did Germany itself feel the pinch of hunger. Territories in the European east conquered and exploited by Hitler were no longer able to supply the necessary rations of grain and meat. Inevitably this led some Germans to contrast the bounty of the Hitler period with the failure of the triumphant Allies to feed the civilians in their care. (Never mind that those same Germans had plundered, murdered and starved to death their European neighbours in the name of “nutritional freedom” for the Greater Reich.)

In a gruesome chapter, Lowe investigates the nature of revenge in post-war western Europe. The public humiliation of women collaborators in France was, the author argues, a way for French men to rehabilitate their masculinity after the “effeminate supplication” of the Vichy government to Hitler. Having been rendered impotent by the military might of Germany, French men saw it as their duty to shear women collaborators of their hair. (By sleeping with the enemy, these women had made a “slut” of France.)

Of course, many French women were well aware that they were being used symbolically. The actress Arletty, having been imprisoned in 1945 for   consorting with a German officer, protested indignantly: “My heart belongs to France, but my vagina is mine.” In post-war Italy, acts of vendetta were more savage than anywhere else in western Europe. Women were strung up from lampposts and their heads shaved and daubed with the legend: “FASCIST SPY”; Mussolini himself was hanged upside down alongside his mistress Clara Petacci and vehemently spat upon. Savage Continent, grimly absorbing, conveys the pity of war and its sorry aftermath with integrity and proper sympathy.