” … ‘Coup leaders, you are the terrorists,’ chanted the demonstrators’ … “ 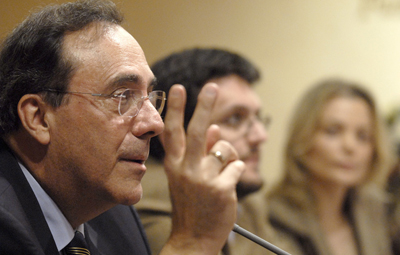 SAN SALVADOR – Cuba solidarity organizations, university students and others repudiated the presence in El Salvador of Carlos Alberto Montaner, a notorious CIA agent and Cuban-born counterrevolutionary.
More than a hundred people gathered Thursday at the entrance of a luxury office building where Montaner gave a lecture to members of business associations.

“Coup leaders, you are the terrorists,” chanted the demonstrators, who demanded the immediate departure of Montaner, whom they accused of conducting a campaign of interference to the detriment of popular processes of change in the region.

“Coup leaders shall not pass,” said several speakers from the Salvadoran Committee of Solidarity with Cuba, the University of El Salvador and representatives of other sectors, such as the Catholic priest Tilo Sánchez.

Montaner’s presence shows that national ties with the terrorist Luis Posada Carriles still exist, the Committee warned in a statement.

The text also claims that Posada Carriles, Montaner and the Cuban American National Foundation maintain systematic terrorist actions against the Cuban people and a destabilizing role against other nations in the region.