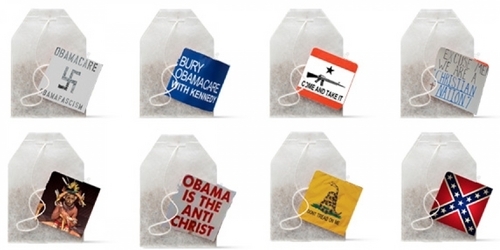 What are we to make of neo-Nazi-huggin' state Senator Russell Pearce's declaration that under his rule as majority leader, Arizona's upper house will be "the Tea Party Senate"? Look no further than the August report on "Tea Party Nationalism," produced by the anti-racist Institute for Research & Education on Human Rights, and co-written by that organization's president Leonard Zeskind, author of the seminal work on the modern American racism, Blood and Politics: The History of White Nationalism from the Margins to the Mainstream. For anyone who's ever attended a Tea Party event (excluding, perhaps, the Tea Partiers themselves), the report's conclusions will not be surprising. The movement is riddled with far-right extremists, militia types, racists, kooks, gun nuts, nativists, John Birchers, and so on.  The notorious Council of Conservative Citizens, which advocates "cultural, national and racial integrity," and is descended from the pro-segregation White Citizens' Councils of the '50s and '60s, has been a major promoter of the Tea Party movement.  White supremacists and other extremist elements have used Tea Party rallies as recruiting grounds. And some leaders of the Tea Party movement have been caught making inflammatory, bigoted statements. Moreover, Confederate battle flags, signs depicting President Barack Obama as an African witch doctor, and a plethora of equally racist placards and messages have been commonplace at Tea Party events. I'm reminded of a tax day Tea Party at the state Capitol I attended in 2009, where one man openly threatened the life of the President of the United States in my presence. In attendance at that rally, along with numerous other wackjobs, was militia-woman Shawna Forde, currently in stir in Pima County for her alleged role in a bloody home-invasion robbery in Arivaca, Arizona that left a nine-year-old girl and her father dead. Along these lines, the IREHR report states the following,

"The result of this study contravenes many of the Tea Parties' self-invented myths, particularly their supposedly sole concentration on budget deficits, taxes and the power of the federal government. Instead, this report found Tea Party ranks to be permeated with concerns about race and national identity and other so-called social issues. In these ranks, an abiding obsession with Barack Obama's birth certificate is often a stand-in for the belief that the first black president of the United States is not a `real American.' Rather than strict adherence to the Constitution, many Tea Partiers are challenging the provision for birthright citizenship found in the Fourteenth Amendment."

Indeed, as we all know, Pearce's pet project for the new legislature is the unconstitutional effort to deprive American citizen children of their birth certificates in Arizona.  A frequent speaker and attendee at Tea Party events, Pearce practically embodies many of the report's claims, and support of the Pearce-sponsored breathing-while-brown-law SB 1070, is high amongst the Tea Party folks. Pearce is not mentioned specifically in the report, though militia nut and ex-Graham County Sheriff Richard Mack gets a nod. Still, parts of the study practically offer CliffsNotse to Pearce's brain. Take, for instance, the report's description of Tea Party nationalism:

"Despite the fact that Tea Partiers sometimes dress in the costumes of 18th century Americans, wave the Gadsden flag and claim that the United States Constitution should be the divining rod of all legislative policies, theirs is an American nationalism that does not always include all Americans. It is a nationalism that excludes those deemed not to be `real Americans;' including the native-born children of undocumented immigrants (often despised as "anchor babies"), socialists, Moslems, and those not deemed to fit within a `Christian nation."' The `common welfare' of the constitution's preamble does not complicate their ideas about individual liberty. This form of nationalism harkens back to the America first ideology of Father Coughlin. As the Confederate battle flags, witch doctor caricatures and demeaning discourse suggest, a bright white line of racism threads through this nationalism.Yet, it is not a full-fledged variety of white nationalism. It is as inchoate as it is super-patriotic. It is possibly an embryo of what it might yet become."

Sure, not all Tea Partiers are racist moon-howlers, and the report itself is quick to point out that some factions of the Tea Party have distanced themselves from others that are obsessed with nativism, racial politics, and social issues.  But you can be sure that Pearce's vision of the Tea Party is one fueled by hatred, intolerance, and outright bigotry. So when Pearce calls his "Tea Party Senate" to order next year, you can anticipate the wingnut results. http://blogs.phoenixnewtimes.com/bastard/2010/11/russell_pearces_tea_party_sena.php Also see: "The Intellectual Foundations of the Tea Party"