A speaker at a recent environmental conference has numerous ties to white power groups, watchdogs say.

What was supposed to be an annual convention of environmental scientists and influential policymakers quickly turned into a political polemic after some discovered that a speaker at one of the event’s breakout sessions had close ties to white supremacists.

Due to what researchers say is a growing trend of radical right-wing groups using the environmental protection movement to push their own nativist agenda, convention organizers may have unknowingly given legitimacy to an alleged white nationalist. Experts studying hate groups in the United States were shocked to find out that Roy Beck, a former environmental journalist and current executive director of the anti-immigration group NumbersUSA, was invited to speak yesterday at the 10th National Conference on Science, Policy, and the Environment (NCSPE) held at the Ronald Reagan Building & International Trade Center in Washington, D.C., Beck was scheduled this week to speak on “Perverse Incentives, Subsidies, and Tax Code Impediments to a Sustainable Economy” and how they relate to the convention’s “New Green Economy” theme.

The event was organized by the National Council for Science and the Environment (NCSE), a nonprofit that works to “improve the scientific basis of environmental decision making” and one that is hardly known for having a political agenda. But for years, watchdog groups like the Southern Poverty Law Center (SPLC) and the Anti-Defamation League (ADL) have been documenting Beck’s intimate connections to the white power movement. 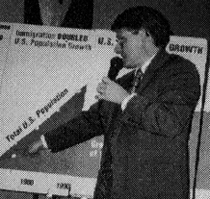 In a photo taken from a Concil of Conservative Citizens’ newsletter, Beck speaks at the group’s national conference in 1997. (Click here to view the newsletter)

Founded in 1997, NumbersUSA is careful to bill itself as an organization that “favors an environmentally sustainable and economically just America,” but in reality, the nonprofit backs a radical right-wing ideology that is much more tacit. Beck boasts that his group was responsible for mobilizing a barrage of angry phone calls and faxes to lawmakers against then-President George W. Bush’s immigration reform package that would have offered a path to citizenship for millions of undocumented immigrants in 2007. NumbersUSA referred reform as an “amnesty” proposal. More recently, the organization endorsed a 2010 ballot proposal in California that would try to deny citizenship to children of undocumented immigrants who were born in the Untied States, a law that would more than likely be unconstitutional, even if it makes it onto the ballot in November.

The nonprofit Center for New Community (CNC), a Chicago-based group that monitors and reports on white nationalist threats, was the first to discover the anti-immigration activist’s attendance at the environmental conference. “Mainly they serve as a mobilizing arm,” says Jill Garvey, a researcher at the organization, when talking about NumbersUSA. “They’re very active online. Beck generally talks about population growth and negative effects of immigration on the environment. But most of the time immigrants are the victims of environmental problems and not the cause.”

As the CNC is quick to point out, it was Beck who spoke at the Council of Conservative Citizens’ national conference in the 1990s. The Council, a group that has referred to blacks as a “retrograde species of humanity” on its website, actually goes back to the Citizens Councils of America, a now defunct coalition that used to represent “white-supremacist groups formed throughout the South to defend school segregation after the Supreme Court outlawed it in Brown vs. Board of Education,” according to the SPLC. Most recently, the Council has been organizing Tea Party protests, and director Gordon Baum was shown on video this month, lamenting that “our nose is being rubbed into the fact that Obama’s black and we better all recognize the fact that he’s a black man and he’s the president.”

Even if Beck’s performance at the Council’s national conference was just a fluke, he also had his book, Re-Charting America’s Future, published by an outlet called The Social Contract Press, an organization that the SPLC has officially labeled a “hate group” for publishing racist screeds from Council members in its quarterly magazine called The Social Contract. Beck also used to be an editor at the Pressuntil 2000, according to CNC, and its current editor, Wayne Lutton, who has been on the Council’s board of advisers, has been quoted by the SPLC saying, “We are the real Americans … not the Hmong, not Latinos, not the Siberian-Americans.”

On top of that, before Beck began using his influence at NumbersUSA to send millions of faxes to Congress to defeat immigration reform a few years ago, he created his organization through his close relationship with John Tanton, considered the main “pioneer of the anti-immigrant movement” by the ADL.

Tanton, who is the publisher of the Press, founded NumbersUSA with Beck through another one of his organizations, U.S. Inc. In fact, as far back as 1991, Tanton hired Beck as a consultant because of what he described in a memo as Beck’s “unique background in environmental reporting, and his understanding of the immigration issue."

Before Beck even became a consultant for him, Tanton was already well-known for his racist writing. Memos leaked in 1988 turned into a media firestorm when Tanton was caught pondering, “As Whites see their power and control over their lives declining, will they simply go quietly into the night? Or will there be an explosion? Why don’t non-Hispanic Whites have a group identity, as do Blacks, Jews, Hispanics?” As a result of the communiqués, one of which warned of a pending "Latin onslaught,” Tanton resigned from U.S. English—yet another one of his immigration organizations, which was lobbying to make English the official language of the United States—after prominent backers of the “English only” group quickly severed connections with the organization.

Garvey at CNC sees danger in allowing people like Tanton and his disciples to push their agenda at mainstream outlets like the NCSPE. “I think it’s a serious matter. It’s just one event, but I think it’s serious in the sense that every event that the Tanton network is allowed to mainstream itself at is one more step into legitimate discourse,” she says. “What [is] the American public supposed to think?”

Over the years, Beck tried to distance himself from what watchdog groups now call the “Tanton network,” denying over and over that he and NumbersUSA have racist or “immigrant bashing” motives. In 2002, NumbersUSA officially ended its partnership with U.S. Inc. But a recent SPLC investigation last year revealed that Beck’s organization had still accepted a $20,000 grant from U.S. Inc. in 2006, and that in 2008 Beck and a coworker spoke at a conference organized by the Press. Then there’s the fact that NumbersUSA joined with the Tanton-created Federation for American Immigration Reform (FAIR) in 2008 to fund an advertising campaign against immigrants, according to the ADL. Meanwhile, Tanton continues to sit on FAIR’s board of directors.

As for NCSPE’s role in the controversy, the convention organizers really seem to have been caught unaware of Beck’s past. “I’m surprised to hear a person like that wasn’t vetted out,” says Lyle Birkey, a spokesperson for the science organization. “We really want to lean toward people that are well-respected in the industry and for all the right reasons. Providing this kind of conference is a huge task to take on, and so to make sure that each one of our 300 speakers is not on a watchdog list, that would take a tremendous amount of work that we simply don’t have the power to facilitate.”

But for researchers like Garvey, the incident is an all-too-familiar story. These days white supremacists and their nuanced sympathizers are finding more ways to cloak their real agenda, especially when it comes to tying environmentalism to the immigration debate. Just this month, CNC reveled that Beck helped staff a fledgling nonprofit called , another “environmental protection” group connected to Tanton that is used as a ruse to recruit people on the left to support a more radical ideology. “You’ll never hear Roy Beck say anything that’s overtly racist and there’s a reason for that,” Garvey says. “They need organizations like NumbersUSA to keep up the charade that they are legitimately concerned about the environment.”

Erin Rosa is an associate editor at Campus Progress.

The Anti-Immigrant Hysteria & its Eugenic Roots