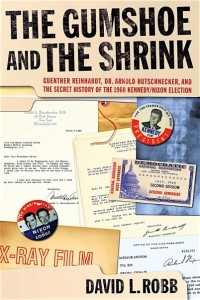 A new book, which will come out this month, gives a whole new insight into the 1960s presidential election between Richard Nixon and John F. Kennedy.

The book, ‘The Gumshoe and the Shrink’, details how Nixon frequently saw a psychotherapist for treatment and how the Kennedy family almost made the details known to the public just days before the extremely close election.

The shrink’s patient was then-candidate Nixon, who began seeing Arnold Hutschnecker in 1952. Nixon was suffering from a battery of symptoms that he suspected were psychosomatic, including back and neck pain and insomnia.

Hutschnecker not only treated Nixon for his stress and anxiety but became an informal adviser during the 1960 presidential campaign, teaching Nixon how to appear more calm and composed next to the effortlessly cool Kennedy.

In a foreshadowing of the Watergate break-in, Nixon’s team infiltrated the offices of two of Kennedy’s doctors in June 1960 and rummaged through them, looking to support rumours that the young candidate was, in fact, gravely ill.

Once Kennedy and his campaign were alerted, they went into full-on attack mode, with Kennedy’s father, Joe, tasking none other than Frank Sinatra to hire the best private eye he could find. ...

Sinatra hired a man named Guenther Reinhardt, who got his start working for J. Edgar Hoover, flushing out unsympathetic journalists and their sources.

In September 1960, Reinhardt produced what he claimed was Hutschnecker’s file on Nixon, procured, Reinhardt claimed, during an office visit in which the shrink indicated the location of the files and then left the room.

A few days before the election, Nixon, increasingly panicked and desperate, leaked Kennedy’s Addison’s disease to the press. An infuriated Joe Kennedy pressed his son to leak word that Nixon was regularly seeing a shrink.

Nixon’s shrink, however, did receive an alarming call right before Election Day. The man on the other end of the phone claimed to be a reporter, and he said he knew that Nixon was a patient.

Hutschnecker neither confirmed nor denied, but no more stories about JFK’s Addison’s disease — an adrenal-gland deficiency that could lead to illness, coma and death — appeared, and Kennedy won the election by a slim margin.