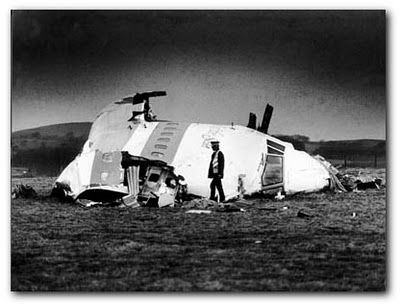 The CIA offered $2m (£1m) to the Crown’s key witness in the Lockerbie trial and his brother, sources close to the case have told The Herald.

They documented the talks and it would have been standard practice for such information to have been relayed to the prosecution team before the trial of Abdelbaset Ali Mohmed al Megrahi, the Libyan serving 27 years for the bombing.

However, his defence team was never told of the CIA offer, in what critics say is another example of non-disclosure that undermines the credibility of Mr Gauci and, in turn, the Crown’s case against Megrahi.

It has not been confirmed that the brothers accepted any money, but the fact that an offer was made is directly relevant to the credibility of Tony Gauci, who became the lynchpin of the case. Paul was never called as a witness.

The latest remarkable twist comes a day after The Herald revealed a top-secret document vital to the truth about Lockerbie was obtained by the Crown but never disclosed to the defence.

The Scottish Criminal Cases Review Commission found that document during its three-year investigation, which concluded earlier this year that Megrahi should have a fresh appeal.

The document, thought to be from the CIA, contains highly classified information about the MST13 timer which allegedly detonated the bomb. The Crown, for national security reasons, is still refusing to hand the material over to the defence.

An offer of remuneration by the US agency could be explained by the political imperative then for the US and Britain to secure a conviction for Lockerbie. At the time, Libya was very much a hostile nation, unlike the more relaxed links between Tripoli and the West which now prevail.

Yesterday in Edinburgh, the defence lodged its case with the appeal court and a preliminary hearing has been set for a week tomorrow.

The defence team also lodged a specification of documents order, demanding the Crown release the classified document. Prosecutors are expected to challenge the appeal, despite the weight of new evidence.

A source close to the case said: “We understand the commission found new documents which refer to discussions between the US intelligence agency and the Gaucis and that the sum involved was as much as $2m.

“Even if they did not receive the money, the fact these discussions took place should have been divulged to the defence.”

The Herald has also seen copies of an agreement with the US government and signed by a senior member of the Crown Office, agreeing not to disclose certain material.

Norman McFadyen, then one of the leading members of the prosecution team and now the Crown Agent, signed the non-disclosure agreement on June 1, 2000.

James Chalmers, a senior lecturer in law at Edinburgh University, said if a member of the Crown agreed not to disclose material shown by a foreign government, it called its worth into question.

“This would raise questions about whether the right to a fair trial has been breached. And if a witness were offered money before giving evidence, this could undermine their credibility.

“It would certainly need to be put to the witness under cross-examination. If such information was not disclosed to the defence, that could give rise to a miscarriage of justice. It is an issue of credibility.”

Dr Jim Swire, whose daughter Flora died in the tragedy, said: “It is shocking to me that if after 19 years of trying to get to the truth about who murdered my daughter, national security is being used as an excuse.”

A spokesman for the Crown Office has previously declined to comment on the case saying it would be “wholly inappropriate” while it is before the appeal court.