Reporters Without Borders Spotlights Major Decline In Media Freedom In US 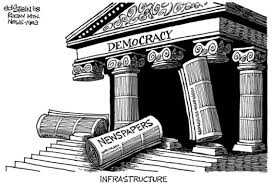 “… The United States has gone 13 positions down to 46th in this year’s index, which covers 180 countries. RWB head of research Lucie Morillon said: ‘This year, the ranking of some countries, including democracies, has been impacted by an overly broad and abusive interpretation of the concept of national security protection.’ …”

The 2014 World Press Freedom Index spotlights major decline in media freedom in the United States. The US has been listed along with countries such as Central African Republic and Guatemala in the Index, which was published on Wednesday by Reporters Without Borders (RWB).

The United States has gone 13 positions down to 46th in this year’s index, which covers 180 countries.

RWB head of research Lucie Morillon said: “This year, the ranking of some countries, including democracies, has been impacted by an overly broad and abusive interpretation of the concept of national security protection.”

Several factors, including armed conflicts, political instability and national security restrict media freedom in many countries, according to the Index.

In countries where the rule of law prevails, security arguments are misused as grounds for restricting freedom of information. “Invoked too readily, the protection of national security is encroaching on hard-won democratic rights,” the France-based non-profit noted, referring to the recent developments in the U.S.

“The trial and conviction of Private [Chelsea] Manning and the pursuit of the National Security Agency analyst Edward Snowden were warnings to all those thinking of assisting in the disclosure of sensitive information that would clearly be in the public interest,” RWB says.

Both American and British authorities “seem obsessed with hunting down whistleblowers instead of adopting legislation to rein in abusive surveillance practices that negate privacy, a democratic value cherished in both countries.”

The United Kingdom is ranked 33rd, three places down, distinguishing itself by its harassment of The Guardian.

In August last year, US Army Private Manning was sentenced to 35 years in jail for handing classified US government documents to the Wikileaks website.

American authorities charged US whistle-blower Edward Snowden with espionage and theft of government property after he stunned the world last year by leaking details of several secret mass electronic surveillance programs run by the United States.

“In the United States, the hunt for leaks and whistleblowers serves as a warning to those thinking of satisfying a public interest need for information about the imperial prerogatives assumed by the world’s leading power,” according to RWB.

The Guardian and the Washington Post reported on NSA’s alleged efforts to monitor activities of millions of people both inside the United States and overseas.

A leaked top secret document revealed that the NSA has obtained direct access to the systems of several U.S.-based Internet and tech companies, including Google, Facebook, and Apple.

The same trio of Finland, Netherlands and Norway heads the index again, while Turkmenistan, North Korea and Eritrea continue to be the biggest information black holes, again occupying the last three positions.

The 2014 index emphasizes the negative correlation between armed conflicts and freedom of information. In an unstable environment, the media become strategic goals or targets for groups or individuals trying to control news and information in violation of the guarantees enshrined in international conventions.

The world’s most dangerous country for journalists, Syria, is ranked 177th. Around 130 professional and citizen-journalists were killed in connection with the provision of news and information from March 2011 to December 2013 in Syria. They are being targeted by both the Assad government and extremist rebel militias.

The index’s annual global indicator, which measures the overall level of violations of freedom of information in 180 countries year by year, has risen slightly. The level of violations is unchanged in the Asia-Pacific region, but has increased in Africa.

The Index marked improvements in Ecuador, Bolivia and South Africa.

The report notes South African President Jacob Zuma refusing to sign a law that would have threatened media freedom. The country climbed to 42nd, 11 ranks upwards.

“The World Press Freedom Index is a reference tool that is based on seven criteria: the level of abuses, the extent of pluralism, media independence, the environment and self-censorship, the legislative framework, transparency and infrastructure,” said RWB Secretary-General Christophe Deloire.

Apart from the index, RWB has also introduced a three-dimensional visualization of the performances of the countries.

Reporters Without Borders (RWB), or Reporters Sans Frontières (RSF), has consultant status at the United Nations and UNESCO.