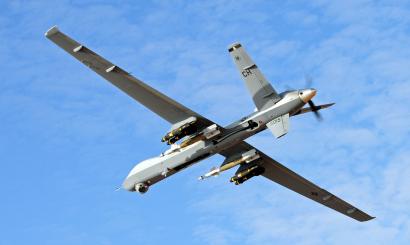 It’s less than 2 feet long and 4 inches around.

But Raytheon is designing its smallest air-launched weapon – the Small Tactical Munition – to help unmanned aircraft deliver a big punch.

Tucson-based Raytheon Missile Systems is developing the unpowered, guided munition on its own dime, to offer the military small precision-guided weapons for unmanned aircraft to carry out strikes on targets such as pickup trucks with surgical precision while limiting civilian casualties and collateral damage.

Raytheon already makes some larger weapons, such as the 500-pound Paveway guided bomb system, that can be carried by the largest drones, such as the Predator, and is developing guided weapons in the 50- to 250-pound classes.

The Small Tactical Munition, or STM, “kind of fills in the gap – we see an emerging need for this kind of weapon,” said Cody Tretschok, Raytheon capture manager for advanced unmanned aerial system weapons.

The 13-pound STM is designed for the military’s smaller drones, such as Shadow, TigerShark, Hunter and Viking, he said.

“With that size of platform, you really need something a little smaller, because you don’t have a lot of payload,” Tretschok said.

“It’s very small; it’s very low-weight; and this new version is also going to be very low-cost, which is another important parameter.”

The STM uses a combination of GPS satellite and inertial navigation with semi-active laser targeting, in which the weapon homes in on a laser spot controlled by a pilot or controller.

The company recently revamped the design to make it shorter and lighter, replacing a 7-pound warhead with a 5-pounder developed specifically for the STM by partner Nammo Talley in Mesa.

The new version will undergo flight testing in Yuma this summer, Tretschok said.

The military hasn’t issued a bid request for a small drone missile, but Raytheon expects one soon.

“We think it’s very imminent,” Tretschok said, noting that the Marine Corps issued a notice of “urgent need” for a small drone weapon last year. “There’s lots of interest; there’s a definite need, and I think it’s just a matter of time before it becomes a real requirement.”

Raytheon is casting the STM as the junior member of a “family” of munitions that can be used by unmanned craft.

The company also is developing the 250-pound-class Small Diameter Bomb II, which can be used on larger unmanned craft, as well as the 100-pound-class Joint Air to Ground Missile and a new 100-pounder called the Monsoon.

The company’s 50-pound-class Griffin missile has been adapted for use on the C-130W Dragon Spear, a fixed-wing gunship developed for the Air Force Special Operations Command, and can be carried on unmanned aircraft.

Northrop Grumman has developed the Viper Strike, a gliding, GPS- and laser-guided munition being used on a Marine Corps manned gunship.

Hellfire missile maker Lockheed Martin, meanwhile, has developed the Scorpion, an unpowered, precision-guided munition that is 21 inches long and weighs less than 35 pounds.

Ashcroft Now in Charge of Ethics for Blackwater
May 05