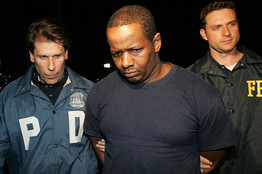 NEW YORK (WBCS 880) — The jury is learning more about the double life of the FBI’s informant, Shahed Hussain in the Bronx synagogue bomb plot.

Hussain posed as a wealthy businessman and a member of Pakistani terrorist group. Under the orders of his FBI handler, Hussain dropped in at a mosque in Newburg looking for outspoken radical Muslims to enlist in a terrorist plot, WCBS 880′s Irene Cornell reported.

LISTEN: WCBS 880′s Irene Cornell with details from the trial on a double life

Hussein insisted under cross-examination that the defendant, James Cromedy, came up with the plot to bomb synagogues in Riverdale and fire missiles at military planes.

The defense attorney in the case argues that the defendants would never have come up with such a plot without the pressure applied by the informant and his promises of big bucks and fancy cars.

FBI paid informant in Bronx synagogue bomb plot $97K ...
New York Daily News | ...  The first prosecution witness in the trial that started Tuesday, showed the jury one of the unexploded bombs the would-be terrorists planned to use to blow up one of two Riverdale synagogues. Defense lawyers contend that without the informant - who they say entrapped the suspects - their bumbling clients would never have tried to blow up two synagogues in Riverdale and shoot down missiles. ...
http://www.nydailynews.com/ny_local/2010/08/25/2010-08-25_fbi_paid_informant_in_bronx_synagogue_bomb_plot_97k_who_provided_terror_suspects.html

The Alarming Record of the F.B.I.'s Informant in the Bronx Bomb Plot 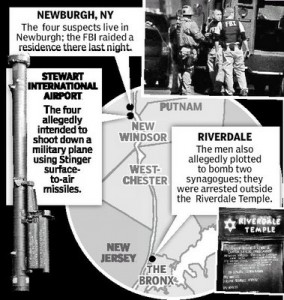 Last month, police and the FBI arrested four Newburgh men on charges that they had plotted to bomb synagogues in the Riverdale neighborhood of the Bronx and fire a missile at a military jet.

Mayor Michael Bloomberg and Police Commissioner Ray Kelly held press conferences at the synagogues to reassure New Yorkers about their safety. During Kelly's remarks, it was startling to hear the commissioner refer to al-Qaeda by name, if only to say that the four purported home-grown terrorists had no ties to Osama Bin Laden's organization.

As more details emerged, however, the less the four defendants sounded like men with the skills to plan a sophisticated terror plot. They were small-time crooks, felons with long criminal records whose previous activities revolved around smoking marijuana and playing video games. One defendant, Laguerre Payen, was arrested in a crack house surrounded by bottles of his own urine; his lawyer describes him as "mildly retarded."

It seemed fairly astounding that, for a full calendar year, such a group could remain interested in and plan anything more complex than a backyard barbecue, let alone a multipronged paramilitary assault, as the indictment against them alleged.

But what the indictment didn't say, and what the initial news reports didn't fill in, was the extent to which the fifth man in the plot, an unnamed FBI informant, had provided the glue to hold the Newburgh 4 together.

That informant was a Pakistani man named Shahed Hussain, code-named "Malik," who agreed to work for the FBI to obtain leniency after he was arrested in 2002 for fraud.

Over a period of about a year, Malik met with defendants James Cromitie, David Williams, Onta Williams, and Payen while under FBI surveillance. Cromitie allegedly said he was upset about U.S. forces killing people in Afghanistan and Pakistan. He talked about being willing to die as a martyr, and threatened to "do something to America."

The Newburgh bomb plot isn't the first of Malik's operations for the government. He played a similar role four years ago in an Albany case, in which he helped the FBI arrest a man named Mohammed Hossain, a cash-poor pizzeria owner, and his imam, Yassin Aref, after persuading them to launder $50,000 in a made-up plot to bring a missile to the U.S. and assassinate the Pakistani prime minister.

In both cases, Malik did not stumble upon active terror cells plotting to bring destruction on American soil. Instead, in both Newburgh and Albany, he needed long periods of time to recruit his Muslim contacts, spin elaborate tales about his terror contacts, and develop solid plans of action, all the while providing the defendants with large amounts of resources and cash incentives.

Malik was so successful that in Riverdale, the Newburgh 4 planted what they believed were actual bombs at two synagogues. In Albany, the defendants were only involved in a cash transaction that, theoretically, was tied to the sale of a weapon.

But in each case, the question remains: Would either set of defendants have done anything remotely like plant bombs or launder money for terrorists if not for the prodding and plotting and encouragement of Malik and the FBI?

And there's a more troubling question: When Malik tells his FBI handlers that the defendants are saying menacing things about America, is he actually telling the whole truth? Translations from the Albany case transcripts suggest that Malik routinely exaggerated and, in some cases, wholly fabricated the words of the defendants. When they talked about Islam being a religion of peace and of jihad being a way of inspiring fealty to Islam, Malik instead told his handlers that they had talked about Islam inspiring them to kill. Those exaggerated reports became the basis for the FBI's case against Hossain and Aref, who were both convicted and sentenced to 15 years in prison.

Aref is now housed in a maximum-security federal prison in Marion, Illinois, where he is held under strict rules that limit his ability to speak with the outside world, in a unit euphemistically called the Communication Management Program. Under the program's rules, he is allowed just one 15-minute phone call each week and is not allowed any contact visits. Hossain is housed in a federal prison in New Jersey.

The Newburgh 4 will face far longer sentences because they are accused of actually planting what they believed were explosive devices.

Like in the Albany case, however, they will be prosecuted almost entirely on the work done by Malik, who arrived in Newburgh about a year ago, driving a shiny black BMW and flashing a lot of cash.

As he had done in Albany, Malik showed up in Newburgh, went to a local mosque, and started looking for recruits.

He found them in four convicted felons with dozens of arrests between them. He initiated the conversations, introduced the idea of a terror plot, and delivered the money, equipment, and resources to back it up. He quickly became known as the guy with ready cash who was interested in the lives of others and was quick to provide aid and comfort.

Malik even offered to pay medical bills when he found out that one of his targets, David Williams, had a brother fighting liver cancer. ...

A defense lawyer aggressively cross-examined a government informer in federal court on Monday about scores of conversations he had with James Cromitie, charged with conspiring to bomb synagogues and shoot down military planes last year.

The conversations included talk about money, guns, Islam and religious justifications for violence. The defense lawyer, Vincent L. Briccetti, made the same claim repeatedly as he questioned the informer, Shahed Hussain, about a range of volatile subjects: “You brought that up, didn’t you?”

As the trial of Mr. Cromitie and three co-defendants entered its fifth week, Mr. Briccetti spent hours on Monday finally broaching the heart of the defense case: that Mr. Hussain and his Federal Bureau of Investigation handlers fostered a crime that Mr. Cromitie and the other men were not predisposed to commit.

A critical day in the trial resulted in angry exchanges and frayed nerves. In his confrontation with Mr. Hussain, Mr. Briccetti did his best to throw the witness off balance by cutting him off or calling him a liar. Mr. Hussain, battered by days of cross-examination, seemed to find his nerve again, calmly challenging assertions by Mr. Briccetti.

Prosecutors have contended that the defendants — Mr. Cromitie, Laguerre Payen, David Williams VI and Onta Williams — embraced, on their own, the violent opportunity presented to them by Mr. Hussain. The four men face charges that include conspiracy and attempting to use weapons of mass destruction.

The defense — entrapment — has rarely, if ever, been successful in terrorism cases since Sept. 11, 2001. Even so, the hearing on Monday started with a reminder of that issue. Before Mr. Hussain took the stand, a juror told the judge that on Thursday, as the jury was leaving Federal District Court in Manhattan, a woman yelled at a few members of the panel, saying, “You need to figure out the difference between entrapment and terror.” The judge, Colleen McMahon, told the jurors that in the future they would be escorted out of the courthouse.

Defense lawyers submitted a letter to the judge asserting that Mr. Hussain had perjured himself, lying about his financial dealings, his immigration status and “his very identity.” They asked that prosecutors be required to investigate and correct any perjury.

While the defense questioning had focused on Mr. Hussain’s credibility, Mr. Briccetti forcefully shifted the topic to the informer’s conduct during an 11-month F.B.I. sting operation in Newburgh, N.Y.

In doing so, he focused on the differences between the two men, repeatedly saying that Mr. Hussain was rich and his client was poor. The informer was educated and knowledgeable about Islam, Mr. Briccetti said, while Mr. Cromitie was a con man with little formal education.

“It all depends on the interpretation,” Mr. Hussain replied.

In another conversation, Mr. Briccetti tried to soften the impact of numerous anti-Semitic remarks made by his client, suggesting that it was Mr. Hussain who had shifted the conversation in that direction.

And Mr. Briccetti tried to undercut the reasons the government had focused on his client in the first place, questioning Mr. Hussain about why he had reported to his F.B.I. handlers that Mr. Cromitie subscribed to Arab satellite channels — presumably proof that he had “broader” knowledge of the world.

In fact, the lawyer said, Mr. Cromitie did not know Arabic and had to be told by Mr. Hussain about a November 2008 terrorist attacks in Mumbai, India, that were front-page news around the world.

Mr. Briccetti kept tugging at one of the trial’s more visible threads: recorded discussions about religion and money. The defense lawyers claim that Mr. Hussain, in essence, bought off four impoverished men, despite recordings in which the informer clearly says that money should not motivate them.

“You mention jihad money,” Mr. Briccetti said. “Is that the same color as regular money? I could buy a cup of coffee with it?”

Mr. Hussain looked to the jurors from time to time. During the long afternoon session, one of them fell asleep.

When Mr. Briccetti accused the informer of being a con man, he pushed back, as he did several times during the proceedings. As the day wore on, Mr. Briccetti focused on a period in winter and spring 2009 when his client dropped out of contact with the informer, playing messages the informer left on Mr. Cromitie’s answering machine.

The lawyer played one recording of Mr. Hussain asking Mr. Cromitie that if God asked him to “go to the jihad, would you say, ‘Allahu akbar’?”