Profile of GOP War Monger Bruce Jackson, the “Nexus Between the Defense Industry & the Neocons” 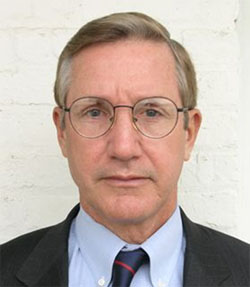 Bruce P. Jackson, a former military intelligence officer and defense industry executive, has a track record advocating hawkish U.S. defense policies and supporting neoconservative advocacy campaigns. Perhaps best known for his role in founding the now-defunct Committee for the Liberation of Iraq, an advocacy group that helped build public support for invading Iraq after the 9/11 attacks, Jackson is the founding directing of the Project on Transitional Democracies (PTD), which promotes democratic reform in former Soviet states. Jackson also helped found the U.S. Committee on NATO, a precursor to PTD that promoted NATO expansion; has been an advisor to the American Enterprise Institute and Frank Gaffney’s Center for Security Policy; served as a director of the Project for the New American Century; and was a member of a now-defunct Freedom House program called the American Committee for Peace in Chechnya.

While he was at the Office of the Secretary of Defense, Jackson worked under Dick Cheney, Paul Wolfowitz, and Richard Perle. After leaving the Defense Department, Jackson joined Lehman Brothers and, in 1993, became an executive at Lockheed Martin Corporation (then Martin Marietta), where he remained until 2002.

Jackson is also active in various elite foreign policy organizations. He is a member of the Council of Foreign Relations, an “expert” at the German Marshall Fund, and a member of the speakers bureau of the Atlantic Council’s Black Sea Energy & Economic Forum.

Many observers have pointed to apparent conflicts of interest in Jackson’s business and advocacy activities. For instance, while he worked for Lockheed Martin, Jackson cofounded the U.S. Committee on NATO (formerly the U.S. Committee to Expand NATO), which promoted a U.S. foreign policy agenda that potentially benefited the defense industry. Wrote one Jackson critic:

"Mr. Jackson was Vice President for Strategy and Planning at Lockheed Martin Corporation, which means that while Jackson was founding the U.S. Committee on NATO and the Project [on] Transitional Democracies; while he was serving on the board of the Project for the New American Century; and while he was chairing the Republican Party subcommittee on foreign policy—all of which advocated more defense—Bruce P. Jackson was also working for a company that stood to gain the most from stepped up spending on weapons.”

A 1997 New York Times article described Jackson's activities in a similar light: "At night, Bruce P. Jackson is president of the U.S. Committee to Expand NATO, giving intimate dinners for Senators and foreign officials. By day, he is director of strategic planning for Lockheed Martin Corporation, the world's biggest weapons maker.”

His allies have also recognized his dual status. An unnamed "prominent neoconservative" once told reporter John Judis that Jackson was the "nexus between the defense industry and the neoconservatives. He translates us to them, and them to us."

Because of Jackson’s prowess as an intermediary, officials in the George W. Bush administration asked him to set up the Committee for the Liberation of Iraq in 2002. “People in the White House said, ‘We need you to do for Iraq what you did for NATO,’” Jackson once said in an interview.

After he stepped down from his position at Lockheed Martin in 2002, Jackson focused his attention on the Project on Transitional Democracies. At one time an active organization with several staff members and a website, by 2010 PTD no longer had a website and appeared to exist almost exclusively as a vehicle for Jackson’s advocacy and policy work. On its 2009 Form 990 tax filing, PTD described itself as a “micro-organization which concentrates exclusively on democratic change and societal transformation in the post-Soviet and post-Yugoslav world. We refer to this project as the Project on the Frontiers of Freedom or, alternatively, the Project on Europe’s East.”

In his capacity as president of PTD, Jackson has been on the domestic and international conference circuit discussing the geopolitics of the Balkans and other former Soviet republics, including at the annual Halifax International Security Forum and the Riga Conference on foreign and security policy.  He has also given presentations at Belgrade’s Centre for Civil-Military Relations (CCMR) regarding Serbia and Montenegro joining NATO and during a Carnegie Endowment panel in Washington entitled “Crisis in Georgia: Frozen Conflicts and U.S.-Russian Relations.”

Jackson is occasionally asked to comment on this region in the press. In November 2010, an Armenian news agency interviewed Jackson about a possible U.S. resolution on the Armenian genocide. The news agency, ARMINFO, paraphrased Jackson’s response, reporting,

“Jackson said that after an intense election, the leaders of both [U.S] parties will be reluctant to engage in international activism, such as recognizing that World War I era killings of Armenians in the Ottoman Empire as genocide. The incoming House Republican generally believe that passing an Armenian resolution in not the foreign policy of the United States.”

In January 2010, the Baltic News Service asked Jackson his views on the Lithuanian parliament’s investigation of allegations that the CIA ran secret prisons in that country. He responded: “I am not aware that there is anything or anybody [in the U.S. government] particularly worried about what’s going on in Lithuania.” He added, “It is a European sport … to release damaging information about American activities. I think it would surprise some Lithuanians in Chicago if Lithuania gets into that sport.”

In early 2006, PTD made a bid for shares in RosUkrEnergo, a Swiss-based joint energy venture between Ukraine and Russia. Jackson considered the expropriation of Ukraine’s gas supply exploitive. Jackson said in a PTD press release republished on the Weekly Standard website: "Due to [PTD's] non-profit status, we will commit to return all profits to the people of Ukraine who are the legal owners of the assets from which the Project would otherwise be improperly and illegally profiting." He added, seemingly tongue in cheek:

"The opportunity to get in on the ground floor of the greatest asset-stripping operation in European history for less than a dollar was something our Board could not pass up. At a minimum, our representatives will be able to attend the secret Board meetings in Switzerland and St. Petersburg where they will get to drink champagne with the FSB and the mafia bosses who have stolen the future of Ukraine."

As of 2010, Jackson was continuing to press for Ukraine to renegotiate its gas contract and gas transit system.

Jackson was a key conservative activist on the former Soviet Union and supporter of NATO even before founding PTD. In the lead-up to the U.S. invasion of Iraq, for instance, he helped draft a declaration for the Vilnius 10, a group of Eastern European countries seeking entry into NATO. The declaration supported U.S. action with or without UN approval. "Eager for U.S. support for their entry into NATO, these countries—dubbed the 'New Europe' by Defense Secretary [Donald] Rumsfeld—joined the war coalition, at least in name." The declaration stated: "The newest members of the European community agree that we must confront the tyranny of Saddam Hussein and that the United Nations must now act." According to the American Prospect, "The declaration provided ammunition for the [George W. Bush] administration, but it also created a furor in Western Europe and even in some of the Vilnius 10 countries, where the public, and even the governments, did not want to be identified as part of what one Slovenian writer termed the 'war coalition.'"

“Bruce Jackson has been to Central and Eastern European countries what Charlie Wilson was in the past to Afghanistan. Except that, unlike Charlie Wilson, he made sure that the work was completed properly by supporting and escorting the newborn democracies in Central and Eastern Europe into NATO and EU integration. A former military intelligence officer and a true Atlanticist, he always viewed NATO as ‘the’ answer to avoiding wars and the emergence of failed states. Much of his work was about convincing the elites in Washington that the integration of these states into NATO was the best tool to stabilizing Europe, and that this also was in the best interest of the United States.”

Jackson’s position on NATO has shifted in the wake of the 2008 global recession and the recent presidential election in the Ukraine. In an April 2010 article for the Hoover Institution, Jackson wrote that ”expansion and integration are huge drains on political and financial capital,” adding that “NATO is a very effective but expensive insurance policy which is not worth purchasing until there is something of political and economic value to secure.”[24] He concedes in the case of countries such as the Ukraine, pushing NATO may not be the best path.

Jackson has been a long-standing critic of Russia, at various times pushing the United States and Europe to pursue antagonistic relations with that country. He was a member of the American Committee for Peace in Chechnya (ACPC), a now-defunct organization founded in 1999 by Freedom House. According to the Guardian, "The ACPC heavily promotes the idea that the Chechen rebellion shows the undemocratic nature of Putin's Russia, and cultivates support for the Chechen cause by emphasizing the seriousness of human rights violations in the tiny Caucasian republic. It compares the Chechen crisis to those other fashionable ‘Muslim’ causes, Bosnia and Kosovo—implying that only international intervention in the Caucasus can stabilize the situation there.”[26]

Jackson once characterized tensions between the United States and Russia as a "soft war." According to the Guardian,

"Jackson sketches three fronts on the new battlefield of ideas and values between Russia and the west: 'Our institutions versus their Potemkin institutions, free markets versus their coercive state monopolies, and our democracy versus their managed democracy. What we don't want is militarized competition.'"

In a 2006 opinion piece on Russia, Jackson wrote:

"Despite statements at the time by President Putin and Minister of Defense Sergei Ivanov that the government intended to recover the great power status of which Russia had been unfairly deprived by the regrettable collapse of the Soviet Union, both Washington and European capitals refused to see any geopolitical calculation in the methodical suppression of political and press freedoms and the takeover of the economy by FSB officers and Kremlin cronies.”

In 2010, Jackson considered that the

“defining policy of the West towards Russia will be a fusion of German economic interdependence and America’s renewed interest in multilateral diplomacy. The engagement of Russia on nonproliferation, Iran sanctions, and other un Security Council initiatives is likely to persist—at some expense to a vocal activism on human rights and democracy promotion.”

John B. Judis, “Minister Without Portfolio,” The American Prospect, May 2003, http://www.prospect.org/cs/articles?article=minister_without_portfolio.

“Passing an Armenian Resolution Is Not the Foreign Policy of the United States, American Politician Thinks,” ARMINFO, November 15, 2010, http://www.armenialive.com/armenian-news/Passing-An-Armenian-Resolution-Is-Not-The-Foreign-Policy-Of-The-United-States--American-Politician-Thinks.

Daniel McKivergan, “The Project on Transitional Democracies Announces Bid for RosUkrEnergo. But who are the Owners?” Weekly Standard, February 13, 2003, http://www.weeklystandard.com/weblogs/TWSFP/2006/02/the_project_on_transitional_de_1.asp.

Daniel McKivergan, “The Project on Transitional Democracies Announces Bid for RosUkrEnergo. But who are the Owners?” Weekly Standard, February 13, 2003, http://www.weeklystandard.com/weblogs/TWSFP/2006/02/the_project_on_transitional_de_1.asp.

Bruce P. Jackson, “Why We Need a Reset,” On Wider Europe, March 19, 2010, http://www.gmfus.org/galleries/ct_publication_attachments/ForeignPolicyJacksonSherrOnWiderEuropeUkraineElections.pdf.

Nathalie Vogel, “The positions which Germany has chosen are quite controversial,” World Security Network, April 11, 2008, http://www.worldsecuritynetwork.com/showArticle3.cfm?article_id=15733.

Bruce P. Jackson, “Why We Need a Reset,” On Wider Europe, March 19, 2010, http://www.gmfus.org/galleries/ct_publication_attachments/ForeignPolicyJacksonSherrOnWiderEuropeUkraineElections.pdf

Ian Traynor, Nick Paton Walsh, and Ewen MacAskill, “The Russian bear is back - and this time it's gas-powered,” Guardian, May 13, 2006, http://www.guardian.co.uk/world/2006/may/13/russia.ewenmacaskill.