“… The term ‘blood libel’ refers to the slander, dating to the late Middle Ages, that Jews serially kidnapped and murdered Christian children to use their blood in rituals. …” 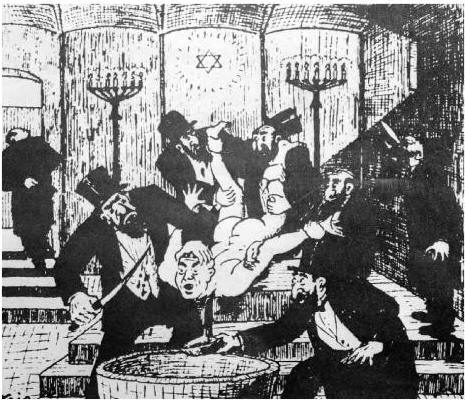 A liberal pro-Israel lobbying group is calling on Sarah Palin to apologize after she accused the media of “manufactur[ing] a blood libel” against her and conservatives after the shooting of Rep. Gabrielle Giffords.

J Street is saddened by Governor Palin’s use of the term ‘blood libel.’

The country’s attention is rightfully focused on the memorial service for the victims of Saturday’s shooting. Our prayers continue to be with those who are still fighting to recover and the families of the victims. The last thing the country needs now is for the rhetoric in the wake of this tragedy to return to where it was before.

We hope that Governor Palin will recognize, when it is brought to her attention, that the term ‘blood libel’ brings back painful echoes of a very dark time in our communal history when Jews were falsely accused of committing heinous deeds. When Governor Palin learns that many Jews are pained by and take offense at the use of the term, we are sure that she will choose to retract her comment, apologize and make a less inflammatory choice of words.

The term ‘blood libel’ refers to the slander, dating to the late Middle Ages, that Jews serially kidnapped and murdered Christian children to use their blood in rituals. After such accusations were leveled, Jews frequently were persecuted and killed. The Ontario Consultants on Religious Tolerance, who publish essays on religious tolerance, hold up this explanation and timeline of the term.

UPDATE: More pro-Israel and Jewish groups criticize Palin’s use of the term.

The Anti-Defamation League, which fights anti-Semitism, wishes Palin would have used a different term, one that isn’t so “fraught with pain in Jewish history.” From its national director, Abraham Foxman:

It is unfortunate that the tragedy in Tucson continues to stimulate a political blame game.  Rather than step back and reflect on the lessons to be learned from this tragedy, both parties have reverted to political partisanship and finger-pointing at a time when the American people are looking for leadership, not more vitriol.  In response to this tragedy we need to rise above partisanship, incivility, heated rhetoric, and the business-as-usual approaches that are corroding our political system and tainting the atmosphere in Washington and across the country.

It was inappropriate at the outset to blame Sarah Palin and others for causing this tragedy or for being an accessory to murder.  Palin has every right to defend herself against these kinds of attacks, and we agree with her that the best tradition in America is one of finding common ground despite our differences.

Still, we wish that Palin had not invoked the phrase “blood-libel” in reference to the actions of journalists and pundits in placing blame for the shooting in Tucson on others. While the term “blood-libel” has become part of the English parlance to refer to someone being falsely accused, we wish that Palin had used another phrase, instead of one so fraught with pain in Jewish history.

David Harris, president of the National Jewish Democratic Council, says Palin escalated her rhetoric and wonders whether she knows what “blood libel” means:

Following this weekend’s tragedy, we — and many others — simply did two things: we prayed for our friend Gabby while keeping all of the murdered and wounded in our thoughts and prayers, and we talked in broad terms about our increasingly charged level of political debate — asserting that now is as good a time as any to look inward and assess how all of us need to dial back the level of vitriol and anger in our public square. Nobody can disagree with the need for both.

Instead of dialing down the rhetoric at this difficult moment, Sarah Palin chose to accuse others trying to sort out the meaning of this tragedy of somehow engaging in a “blood libel” against her and others. This is of course a particularly heinous term for American Jews,  given that the repeated fiction of blood libels are directly responsible for the murder of so many Jews across centuries — and given that blood libels are so directly intertwined with deeply ingrained anti-Semitism around the globe, even today.

Perhaps Sarah Palin honestly does not know what a blood libel is, or does not know of their horrific history; that is perhaps the most charitable explanation we can arrive at in explaining her rhetoric today.

All we had asked following this weekend’s tragedy was for prayers for the dead and wounded, and for all of us to take a step back and look inward to see how we can improve the tenor of our coarsening public debate. Sarah Palin’s invocation of a “blood libel” charge against her perceived enemies is hardly a step in the right direction.

And from Simon Greer, president of Jewish Funds for Justice:

We are deeply disturbed by Fox News commentator Sarah Palin’s decision to characterize as a “blood libel” the criticism directed at her following the terrorist attack in Tucson. The term “blood libel” is not a synonym for “false accusation.” It refers to a specific falsehood perpetuated by Christians about Jews for centuries, a falsehood that motivated a good deal of anti-Jewish violence and discrimination. Unless someone has been accusing Ms. Palin of killing Christian babies and making matzoh from their blood, her use of the term is totally out-of-line.

In the past two months, Ms. Palin and Glenn Beck, the most well-known media personalities on Fox News, have abused two of the most tragic episode in the history of the Jewish people: the Holocaust and the blood libel. In addition, Roger Ailes, the head of the Fox News channel, referred to the executives at NPR as “Nazis.” Perhaps the popular news channel has such an ingrained victim mentality that it identifies with one of the most persecuted minorities in human history. But the Jewish community does not appreciate their identification, which only serves to denigrate the very real pain so many Jews have suffered because of anti-Semitic violence. It is clear that Fox News has a Jewish problem.

Sarah Palin did not shoot Rep. Gabrielle Giffords. Only the perpetrator can be found guilty for this act of terrorism. But it is worth pointing out that it was Rep. Giffords herself who first objected to Ms. Palin’s map showing her district in the crosshairs. “We’re on Sarah Palin’s targeted list, but the thing is, the way she has it depicted, it has the crosshairs of a gun sight over our district. When people do that they have to realize that there are consequences to that action.” According to Ms. Palin’s logic, Rep. Giffords statement was a blood libel against the Fox News host. The fact that Rep. Giffords is Jewish and Ms. Palin is Christian makes the accusation even more grotesque.

Ms. Palin clearly took some time to reflect before putting out her statement today. Despite that time, her primary conclusion was that she is the victim and Rep. Giffords is the perpetrator. As a powerful rhetorical advocate for personal responsibility, Ms. Palin has failed to live up to her own standards with this statement.

Previous Article
Texas Board Probing Psychologist who used “Harsh Techniques” against Terror Suspects for CIA
Next Article
Freedom Assn.: “The European Arrest Warrant is a Sinister Threat to Civil Rights”