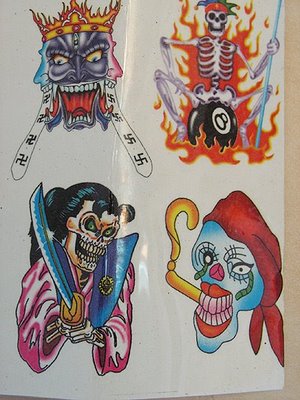 Parents who bought candies for their children at the Super-Pharm drugstore chain in Tel Aviv were surprised to discover swastika-decorated tattoo stickers inside.

The sweets came from Holland but received a hechsher (a kosher approval) from the Chief Rabbinate and have a Super-Pharm sticker on their wrapping.

Children who bought the raspberry-flavored sour stick candies received tattoos inside, some of which were imprinted with swastikas and skulls. As mentioned, these are imported candies, but the packaging promises in Hebrew that a gift can be found inside.

Yedioth Tel Aviv discovered that the candies with the stickers were sold in a number of Super-Pharm stores in the city.

The chain responded by saying, “As soon as the issue was brought to our attention, we removed the product from the shelves in order to return it to the supplier.”

The marketing company, Guri Import and Distribution Ltd., said in response that “the product is imported in a closed package from the manufacturer in Holland. We turned to the company that provided us with tattoos that were added to the clear packaging. As a result of complaints that the tattoos have pictures of swastikas, we stopped the distribution and sent our workers out to the stores to remove the packages from the shelves. We apologize to our customers for their distress.”