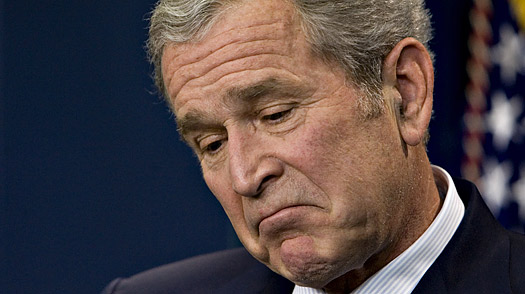 Despite the enormity of the story, a virtual news blackout has remained in place since Margie Schoedinger first filed charges against George W Bush in 2002. Schoedinger had accused Bush of rape and other sexual crimes against both her and her husband, only one publication in the USA saw fit to print anything about her or her allegations. That publication was her local newspaper.

Her subsequent suicide earlier this year raised many eyebrows amongst those who learned of her death via the internet. Even though the sequence of events was bizarre, again the American media ignored Schoedinger completely.

However, the US press were not alone. Both the (London) Times newspaper and the BBC as well as other major news organisations in the UK were furnished with the story and sources for the original court filings. This should have garnered some attention for the story from the big media sources, if only to ridicule the allegations. Instead, in the same way the American media served its audience a stream of controlled news, so too did the British media by pretending Schoedinger didn't exist.

Schoedinger apparently committed suicide on 22nd September of 2003 but her death only attracted new attention on the internet in November of 2003. Only now has one small-circulation newspaper in the UK run the story of her demise. It found the story so newsworthy it ran its headline on the front page next to the title header.

The New Nation serves the black community of London and, according to a spokesperson for the newspaper,  has a circulation of 25,000. This spokesperson also stated that the newspaper had confirmed the details of the story before publishing and apologised for the misprinting of Schoedinger's death as 12th December 2003.

That a newspaper in the English-speaking part of the world has finally deemed this story worthy of publication finally gives legitimacy to it. If one paper can cover this then so can others.

Many regular readers of `quality' newspapers such as the Times, Telegraph and even the NY Times have never heard of Margie Schoedinger. Her tale illustrates how the news available on the internet is often of greater value than that which is paid for. Editors should be asked by their paying readers and viewers why this story has been censored.

One can only deduce that the likes of Rupert Murdoch, Lord Conrad Black and Greg Dyke of the BBC have chosen to keep their political masters happy by blacking out any reference to the allegations and apparent suicide of Margie Schoedinger.

Hopefully the public will learn that what is news by the standards of big-money radio, television and print may not be news according to their readers. The support of independent media and its reference as a reliable source is increasingly the only effective way to inform the public of the real events in the world.

Below are scans of the newspaper's coverage, as well as the full text of their story.

A black woman who claimed to have been raped by US President George W Bush and was planning to take him to court has died of a gun shot wound to the head.

LAST FRIDAY (December 12), Margie Schoedinger, 38, was pronounced dead as a result of a 'gunshot wound to the head'. The death was officially registered as 'suicide' by the Harris County Examiner's Office.

As reported exclusively by New Nation in July, Schoedinger of Sugar Land, Texas, had filed a lawsuit against President Bush (a former Governor of Texas) in December 2002 accusing him of a series of 'individual sex crimes' against her and her husband.

In the amazing seven- page document, filed at Fort Bend County Court in Texas, Schoedinger claimed that Bush had abducted, drugged, raped and beat her.The US media had largely ignored the filing of the lawsuit and the story had only appeared in a local newspaper.

She also suggested that she 'dated George W Bush as a minor', and the President may have been the father of a child she miscarried following the alleged rape.

Schoedinger said she had filed the lawsuit on December 3, 2002 and although court documents filed on the following day mention Bush and offer him 20 days to respond or appear in Fort Bend, it is still unclear whether the President was ever served with the suit.

Schoedinger was attempting to claim US$1 million in actual damages, plus US$49 million for punitive damages including emotional distress and loss of freedom.

Speaking earlier this year to American journalist Jackson Thoreau, Schoedinger said that the President had personally contacted her to say that he wanted her dead, but could trust no one to carry out the crime.

Of course, there is no indication that the president had anything whatsoever to do with her death. Of the lawsuit she said: 'I am still trying to prosecute, but as yet, I haven't had a court date set.

'I want to get this matter settled and go on with my life. People have to be accountable for what they do and that is why I am pursuing this lawsuit.'

(Thanks to Victor ScottRoss Moore for the lead)

She was murdered, ritually sacrificed.

Hmmmmm. So she commits suicide on
the Autumnal Equinox? Doubly odd.

The Pentagon Shooter and the Murder of Col. James Sabow