Kansas City: Civil Rights Leader Leon Jordan Murder Case was Reopened after Gun Turned Up … in Use by POLICE - The Constantine Report
0 SHARES

Assassinations » Kansas City: Civil Rights Leader Leon Jordan Murder Case was Reopened after Gun Turned Up … in Use by POLICE

Kansas City: Civil Rights Leader Leon Jordan Murder Case was Reopened after Gun Turned Up … in Use by POLICE 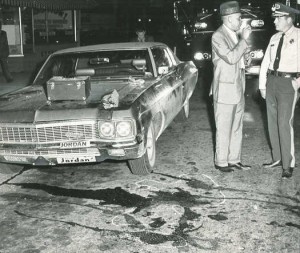 In a reversal of an earlier decision, Kansas City police are reopening a 40-year-old investigation into the 1970 shotgun slaying of black political leader Leon Jordan.

The about-face came after local civil rights leader Alvin Sykes met with Police Chief Jim Corwin, and comes on the heels of another major development in the case. Police have rediscovered physical evidence in the case that they had earlier said was missing.

Not only have they found partial fingerprints taken from the murder weapon, a Remington 12-gauge Wingmaster shotgun, they also have found the gun itself — in one of their own patrol cars.

Enhancing and analyzing the old fingerprints using modern-day technology such as the Automated Fingerprint Identification System could lead to new clues in the case, according to Linda Netzel, director of the department’s regional crime lab.

“It was the chief’s decision to reopen the case after consulting with others inside the department and visiting with Mr. Sykes,” police spokesman Capt. Rich Lockhart said Wednesday. “But the biggest issue was finding the evidence.”

Jordan, a former Kansas City police officer and co-founder of the black political club Freedom Inc., was gunned down on the street about 1 a.m. on July 15, 1970, just outside his Green Duck tavern at 2548 Prospect Ave.

The slaying occurred three weeks before a Democratic primary in which Jordan was running for re-election to a seat in the Missouri General Assembly. At the time, Jordan was considered the most powerful black politician in the state.

But police said at the time that politics was only one of many possible motives for his slaying.

DeGraffenreid and many black leaders said the case still haunts them. That’s one reason it has been assigned to the department’s Cold Case Squad — making it the oldest case they’ve ever re-examined.

Sgt. Richard Sharp, a homicide investigator who supervises the squad, said his officers already are reassembling all the paperwork in the case and going through the lengthy case file.

“We’ll look for other possible suspects and analyze all the evidence, and we will talk to anyone who thinks they have any knowledge about this case,” Sharp said.

But it won’t be easy to crack.

“A big problem in a case this old is people’s personal opinions,” said the squad’s Detective Bill Martin.

Police first realized that crucial evidence in the case — including the shotgun used to kill Jordan — was missing after The Kansas City Star requested an inventory of all the physical evidence in preparation for a July 11 story on the 40th anniversary of the murder.

At the time, police said the case had been exhaustively investigated and re-examined numerous times and that they did not intend to reopen it. But officers continued to search a separate storage area for fingerprints taken during the investigation, including partial prints from the gun.

“We found the latent fingerprint cards and we have retained some of the ballistics,” said the crime lab’s Netzel.

She noted that one of her technicians, who had read The Star’s story and was curious about the case, took the gun’s serial number from one of the fingerprint cards and ran it through a computerized weapons tracking system.

His check tracked the gun back to the Police Department.

Around 1976, after the Jordan investigation was closed, the department apparently transferred the gun to “persons unknown,” Lockhart said. He speculated it could have been sold at a police auction.

The following year, the department purchased the weapon from a gun shop for use in one of its patrol cars. The Remington Wingmaster Model 870 is the same type used by Kansas City police in their patrol car arsenal.

By then, the gun had been extensively altered and modernized.

The gun next appears in the department’s records in 1997, when one of its officers used it to shoot a suspect. According to The Star’s archives, that shooting occurred on Nov. 5, 1997, at 1215 Armour Road in North Kansas City.

As in all police shootings, the shotgun was examined by the crime lab, and a record was made of that analysis.

“We should not have let a murder weapon walk out of our property room under any circumstances,” Lockhart said Wednesday, noting that the department could find no records explaining how that happened. “That’s the great unanswered question.”

The decision to reopen the case comes after Sykes had been pushing Kansas City police and the FBI to work together in reinvestigating the Jordan murder.

Sykes is probably best known for persuading federal and Mississippi officials to reopen one of the nation’s most infamous civil rights murder cases: the 1955 beating death of 14-year-old Emmett Till. It took 50 years to find the murder weapon in the Till case.

As part of his Emmett Till Justice Campaign effort, Sykes met with Corwin shortly after The Star’s anniversary story and apparently helped persuade the chief to take another look at the case. Now, Lockhart acknowledges that earlier reviews may have been inadequate.

“We originally thought that there had been a pretty extensive review of this case throughout time,” he said. “But the review that we thought had been done, we can’t really figure out when it was done or who did it.

“We want to look at those fingerprint cards using modern techniques to try and enhance them and see if they will tell us anything about whose they might be — they are still unidentified.”

As the probe begins anew, Sykes is turning his attention to the U.S. Department of Justice. He met recently with Tom Perez, assistant attorney general in the Civil Rights Division, to try to convince him that it’s also time for federal officials to take another look at the case.

“All of my major victories with law enforcement and the Justice Department started off with a no,” he said.

Shotgun timeline 1965: Gun is stolen from a Coast to Coast hardware store in Independence.

1970: Gun is recovered from a vacant lot in Kansas City, where Jordan’s killers apparently dumped it.

It is inventoried and put in police evidence room.

1976: Gun is acquired by “unknown person” outside the department.

1977: Gun is purchased by Kansas City Police Department from a local dealer for use in a patrol car.

1997: Gun is used by an officer in the shooting of a suspect and sent to the crime lab for analysis.

1998: Gun is returned to service and assigned to Special Operations Division.

2010: Gun is recovered from trunk of a police car and returned to the evidence room.