Rich Ungar's Live Blog, Election day, Nov. 2, 2010: " ... Get ready for a long night in Colorado. AP is reporting that there has either been an error in their vote tally or an error on the part of the county overseeing the Denver area voting count. It looks like 40,000 votes that may have been registered to the benefit of Republican Ken Buck may belong to Michael Bennet. What is unclear is whether this is simply an error made by AP in reporting the vote tally or if it an actual official voting count mistake. ... "

Ken Buck is not a grass-roots politician 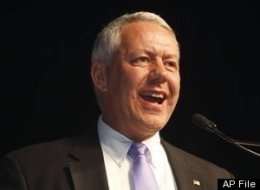 He is portrayed as a Weld County "good ol' boy," somebody who stands for traditional conservative values and has not been a part of the "Washington elite."

Nothing could be further from the truth.

Buck is part of the establishment. Buck is from New York and went to an Ivy League school at Princeton. Buck offers nothing new and offers no change from the failed policies of the Bush years.

Let's really get away from the failed policies of the past 30 years and keep Bennett in Washington to really work for the fine people of Colorado.

"Buck told a group of veterans that he believes VA hospitals would be better-run if they were privatized, so long as funding still came from the public sector. The comment has been criticized because ... VA hospitals, which are publicly administered, get higher ratings than most privately-run health care facilities. .... ":

Ken Buck compared a woman's rape to "buyer's remorse" and refused to proscute:

On Meet The Press, Ken Buck Compares Being Gay To Alcoholism ...

Oct 17, 2010 ... The candidates for Senate in Colorado met for a debate on Meet The Press this morning. Democrat Sen. Michael Bennet and Republican Ken Buck ...

People For the American Way released a TV ad in Colorado today calling out Senate candidate Ken Buck for the millions of dollars in support he's received from shadowy corporate interest groups, including the U.S. Chamber of Commerce, which has been accused of funneling money from foreign corporations toward U.S. elections. ...