“It would be mistaken … in the manner of much of the Polish and international media, to confuse the widespread shock at the crash with broad public sympathy for the figure and politics of Lech Kaczynski. Kaczynski was one of the most unscrupulous representatives of the Polish ruling elite. … [He] sought to establish authoritarian forms of rule based on reactionary Polish chauvinism. … “ 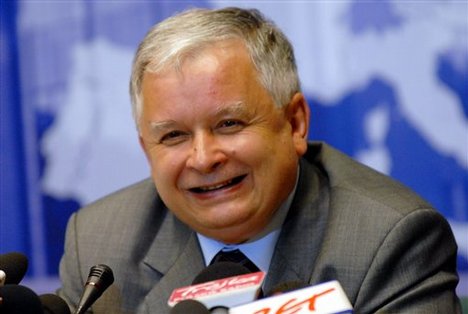 The airplane crash near Smolensk in Russia April 10, which resulted in the death of Polish president Lech Kaczynski, has led to widespread consternation inside Poland. Along with Kaczynski, the accident claimed the lives of some 80 leading members of the country’s political and military elite. They were on their way to a memorial ceremony in Katyn, Russia, where 70 years earlier 22,000 Polish officers and intellectuals were murdered by Stalinist thugs.

It would be mistaken, however, in the manner of much of the Polish and international media, to confuse the widespread shock at the crash with broad public sympathy for the figure and politics of Lech Kaczynski. Kaczynski was one of the most unscrupulous representatives of the Polish ruling elite.

The former child film star and advisor to the Solidarity trade union was a leading architect of the restoration of the capitalist free market and so-called shock therapy that commenced in the early 1990s. As president, Kaczynski conducted a series of virulent attacks on the social and democratic rights of the population relying on the support of extreme right-wing parties. According to opinion polls, he had little chance of re-election in the presidential vote scheduled for this autumn.

Lech Kaczynski was elected president in October 2005 with the smallest number of votes ever recorded by a victorious candidate for the post. One quarter of the electorate voted for the conservative politician in the second ballot. Kaczynski was able to win the post with such a narrow base of support only because his predecessors had been so discredited.

The post-Stalinist Democratic Left Alliance (SLD) had undertaken an offensive against the Polish welfare state in its four years in government and was involved in numerous corruption affairs. The only serious rival to Kaczynski was the current Prime Minister Donald Tusk, who had announced his own plans for radical cuts and privatization.

In the September 2005 parliamentary elections, his Law and Justice (PiS) party emerged as the strongest parliamentary group and the following month Kaczynski won the presidential election. During the presidential campaign Kaczynski sought to mobilize the more backward layers of the Polish population with a mix of social demagogy, nationalism and calls for a fight against corruption.

Just nine months later he presided over the nomination of his twin brother Jaroslaw to the post of prime minister. The Kaczynski brothers then formed a coalition with two right-wing, overtly anti-Semitic parties, the League of Polish Families (LPR) and Samoobrona (Self-Defence of the Republic of Poland).

In the guise of a struggle against corruption, the Kaczynskis increased the repressive capabilities of the state. At the same time, they increased their own influence by increasing their personal powers and placing political cronies in key posts. One of the first official acts of the Kaczynski government was a change to the country’s broadcasting law allowing the twins direct access to national television and radio.

A key project of their government was the creation of the Central Anticorruption Bureau (CBA). The office unites the police, secret police and judicial authorities in an organization that has similar powers to the former Stalinist secret service. Under the direct control of the prime minister, the CBA has been used on a number of occasions by the Kaczynskis to neutralize political adversaries—including members of their own government.

Despite its populist demagogy, the PiS government went on to impose the austerity policies of the preceding government, making merely cosmetic changes. After a brief pause the policy of privatization of state assets was also continued. In the sphere of foreign policy, Lech Kaczynski essentially continued the course of his predecessor Alexander Kwasniewski (SDL), i.e., a strong orientation to American imperialism aimed at expanding the country’s room for maneuver within Europe. Lech Kaczynski’s own bumbling and utterly provincial manner typified the increasing isolation of the country.

In October 2007 the government led by his brother collapsed following fierce internal divisions and Lech began to work closely together with the new Prime Minister Donald Tusk, leader of the rabidly pro-free market Civic Platform (PO).

After nearly five years in office Kaczynski had managed to lose even his narrow base of support. Shortly before his death he was polling around just 20 percent.

In this respect Kaczynski has shared the fate of every Polish head of government and president in the post-Stalinist era, none of whom has ever served more than one term of office—with the exception of Kwasniewski. Since 1990 Polish society has been dominated by politicians who have their roots either in the former Stalinist regime or the opposition Solidarity movement. Both sets of politicians have sought to plunder the country’s resources through a mixture of privatizations and social cuts. When one group in power is sufficiently discredited in the eyes of the population, then the other group takes over. All of this has occurred under the direct jurisdiction of the European Union and its institutions.

Kaczynski played a central role in the restoration of capitalism. After completing his law studies in 1977, he established contact with the “Committee for the Defense of Workers” (KOR). From that time he stood on the right wing of the opposition trade union movement. In 1980 he was one of the advisors to Solidarity and worked closely with its leader Lech Walesa to suppress political demands within the trade union and subordinate the movement to the Catholic Church.

In 1989 Kaczynski was a representative at the so-called “round table,” which organized the restoration of capitalism. The chief task of the round table was to divide power and influence between the new rising layers in Solidarity and the former Stalinist elite, while preparing shock therapy for the population at large. As senator, then member of parliament and eventually co-coordinator for the security and secret services, Kaczynski was directly involved in imposing this “therapy.” The consequences for the population were dramatic and led to a humiliating defeat for the Solidarity-led government in 1993.

At this point Kaczynski withdrew from public politics. It was only after the discrediting of the subsequent post-Stalinist regime after four years in power and the election of a revamped Solidarity (AWS) government in 1997 that Kaczynski returned to the political stage. He took over as Justice Minister from June 2000 until the fall of the government in July 2001. Following a wave of controversial restructuring measures, dismissals and privatizations, the AWS was so unpopular it failed to win enough votes to be represented in the new parliament. At that time Kaczynski’s remodeled PiS also only won 9.6 percent of the vote.

Kaczynski then concentrated on politics in Poland’s capital city and was elected mayor of Warsaw in November 2002. In office he made clear his contempt for democratic rights, in June 2005, for example, banning a gay rights march. At the same time, he allowed neo-Nazis to stage a counter-demonstration. Despite the ban, the gay rights forces assembled and were brutally attacked by the neo-Nazis. Kaczynski later criticized the police because they had protected the assembled gays and their supporters from the attacks launched by the fascists.

Other policy hobby-horses included his demand for the introduction of the death penalty and his proposal that homeless people should be penned in container slums outside of the city limits, so as not to spoil the view for tourists and the city’s well off.

Contrary to statements by leading members of the German Greens, Lech Kaczynski did not “represent the interests of his country,” nor had he “devoted his life to the freedom of Poland and the freedom of Europe” (German chancellor Angela Merkel). He was a representative of the Polish ruling elite and sought to establish authoritarian forms of rule based on reactionary Polish chauvinism.