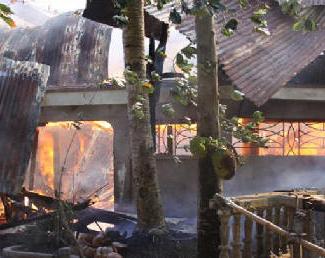 LUCENA CITY, Philippines – President Arroyo visited the wake of the late Quezon Gov. Rafael Nantes at the convention center here and spoke with his family on Wednesday.

Betty Nantes, the wife of the late governor, and Sam Nantes, the governor’s son, asked the President for help in determining the cause of the governor’s death. The family believes the governor’s helicopter, a Robinson R44 Raven II, was sabotaged. They want the President’s assistance in getting American aviation experts to conduct a parallel investigation into the helicopter crash that killed the governor, his pilot and 2 security escorts. Sam told ABS-CBN News that they do not believe pilot error caused the crash. The Raven’s pilot was experienced with the helicopter, clocking many flying hours with the governor during the campaign, the governor’s son said. Mrs. Nantes explained the crash coincided with rumors that her husband was connected with illegal drugs seized in the province by agents of the Philippine Drug Enforcement Agency (PDEA). She said PDEA denied conducting such an operation in Quezon. The President assured Betty and Sam that she will look into the matter. She would let them know if US aviation experts can conduct an investigation into the crash. After half an hour, Arroyo left for Manila. The governor’s body will be interred in Lucban, Quezon on Saturday. According to initial investigation of the Civil Aviation Authority of the Philippines, pilot error may have caused the fatal crash. Investigators from the military and police have checked the crash site and found no traces of explosives, thus ruling out that a bomb was placed in the governor’s helicopter. The Raven II helicopter crashed 5 minutes after taking off. The crash site was a little over a kilometer away from where the helicopter took off. - Report from Gretchen Malalad, ABS-CBN News http://www.abs-cbnnews.com/nation/regions/05/19/10/nantes-family-sees-sabotage-chopper-crash