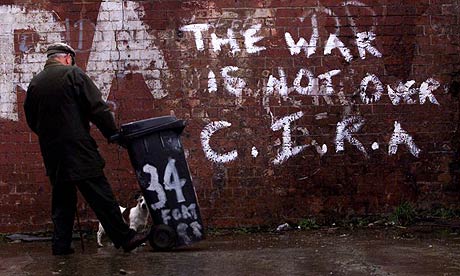 Peter King's hearings on extremism in the American Muslim community start tomorrow, and today, the New York Times reminds us of a part of King's past that he'd rather not have seen on the front page of his newspaper today:

Long before [King] became an outspoken voice in Congress about the threat from terrorism, he was a fervent supporter of a terrorist group, the Irish Republican Army.

"We must pledge ourselves to support those brave men and women who this very moment are carrying forth the struggle against British imperialism in the streets of Belfast and Derry," Mr. King told a pro-I.R.A. rally on Long Island, where he was serving as Nassau County comptroller, in 1982. Three years later he declared, "If civilians are killed in an attack on a military installation, it is certainly regrettable, but I will not morally blame the I.R.A. for it."

As Mr. King, a Republican, rose as a Long Island politician in the 1980s, benefiting from strong Irish-American support, the I.R.A. was carrying out a bloody campaign of bombing and sniping, targeting the British Army, Protestant paramilitaries and sometimes pubs and other civilian gathering spots. His statements, along with his close ties to key figures in the military and political wings of the I.R.A., drew the attention of British and American authorities.

A judge in Belfast threw him out of an I.R.A. murder trial, calling him an "obvious collaborator," said Ed Moloney, an Irish journalist and author of "A Secret History of the I.R.A." In 1984, Mr. King complained that the Secret Service had investigated him as a "security risk," Mr. Moloney said.

Questioned by the paper's Scott Shane, King says that, well, that was different. He likens the IRA to the African National Congress and the Irgun (not, interestingly, the PLO). "I understand why people who are misinformed might see a parallel," he said. "The fact is, the I.R.A. never attacked the United States. And my loyalty is to the United States."

This is a true and legitimate point. But it raises some questions about his world view, doesn't it? If the principle is support for the United States rather than taking a stand on terrorism qua terrorism, then we must assume that King supports the ETA, felt all right about the Baader-Meinhof gang, had no real quarrel with the Italian neo-fascist group that bombed the Bologna train station, et cetera.

Yet somehow one doubts that that is really King's position. He defended IRA terrorism because he is intensely Irish and hated the British occupation, period. If in some parallel universe the IRA had committed a terrorist act on American soil, we can wonder what side he would have chosen (it should be noted that quite a few prominent Irish-American politicians, of the right and the left, either defended or failed to denounce IRA violence).

As for the hearings themselves, I actually do not think King is a racist. I knew him a bit in my New York years, and I don't recall hearing him use the kind of code language conservatives often use about, say, black people. I sort of liked him on a personal level. He wasn't a party line automaton, although these last couple of years he says some pretty extreme things on Fox.

Yet one can be non-malevolent and still be wrong. Richard Cohen in yesterday's WashPost challenged King's factual case:

It happens to be an awkward fact that just last month, a University of North Carolina terrorism expert, Charles Kurzman, reported a drop in attempted or actual terrorist activity by American Muslims - 47 perpetrators and suspects in 2009, 20 in 2010. This does not mean that there is no threat, but, when measured against ordinary violent crime, it is slight. In fact, the threat from non-Muslims is much greater, encompassing not only your run-of-the-mill murderers but about 20 domestic terrorist plots, including one in which a plane was flown into an IRS building in Austin...

The findings of the Kurzman study just get more and more awkward. It turns out that in exposing alleged terrorist plots, "the largest single source of initial information (48 of 120 cases) involved tips from the Muslim American community." Not only does this contradict King's implicit charge that the American Muslim community is one vast terrorism enabler, but it suggests that an outcome of his hearings will be the further alienation of this community - and less cooperation with the authorities.

King may not be a bigot himself, but the hearings are, as Cohen put it, fuel for the bigots. To the extent that there's a legitimate question about extremism in Muslim America, and I think there is a legitimate concern there, I think King would do better to recruit a bipartisan group of lawmakers and do outreach to respected Muslim groups. But he couldn't get as much TV time or raise as much money off of that.