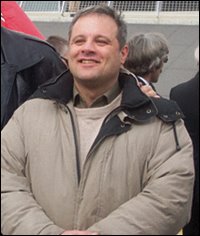 Jurors in the trial of blogger Hal Turner have told a judge they are deadlocked.
BY PETER J. SAMPSON
The Record | March 9, 2010

BROOKLYN – For the second time in three months, a jury is trying to decide whether shock jock Hal Turner of North Bergen threatened to assault or murder three federal judges, or was only expressing an opinion when he wrote they “deserved to be killed.”

A jury of seven men and five women began their deliberations shortly before 3:30 p.m. Monday in U.S. District Court in Brooklyn after listening to more than 2 ½ hours of closing arguments and instructions on the law. They recessed at 5 p.m. without reaching a verdict and will resume their deliberations at 9 a.m. Tuesday.

Turner, whose radio show catered to an audience of neo-Nazis and white supremacists, is on trial on a single count of threatening three Chicago-based federal appeals court judges. The charge stems from postings Turner made last June on his radio network blog in which he said the jurists “deserved to be killed” for upholding a local ban on handguns.

Turner’s first trial ended in a hung jury in December. If convicted this time, he could face up to 10 years in prison.

The second trial differed significantly from the first. This time the government called the three judges to testify that they felt the threat was real, while Turner also took the stand to detail how he was recruited by the FBI and instructed to use violent rhetoric to flush out dangerous radicals.

During their summations, prosecutors and the defense clashed over whether Turner’s speech was protected by the First Amendment.

Chicago-based Assistant U.S. Attorneys William Ridgeway and William R. Hogan argued that Turner clearly threatened the judges, targeting them for “doing nothing more than their jobs.”

“He demanded that they obey his version of the Constitution or die,” Ridgeway said, adding Turner also posted a “roadmap” that included the judges’ photographs and a map to their courthouse offices.

In his closing remarks, defense attorney Nishay Sanan told the jury that the First Amendment protects “vehement, scathing and offensive criticism” of public officials, including U.S. judges. Should jurors find that the statements for which Turner is charged were “no more than mere political hyperbole” then they would be justified in concluding that no threat was made, he said.

“Just because Chicago throws a fit is not enough to convict Hal Turner,” Sanan said.

Sanan urged the jury to disregard the judges’ testimony, questioning how they could be objective about Turner’s commentary and suggesting prosecutors were trying to play on jurors’ sympathy and fears.

He also accused prosecutors of hiding the truth about Turner’s role as a valued intelligence source for the FBI.  The defense lawyer conceded his client’s commentary could be offensive, but attributed that to his “shock jock persona” and insisted he never meant to harm anyone.

“Whether or not Hal Turner is a white supremacist does not matter in this case,” Sanan said, noting prosecutors grilled Turner for more than a day in an effort to paint him as a racist. “It is time to tell Chicago to stop freaking out … that giving an opinion passionately is not a crime,” Sanan said.

In his rebuttal, Hogan called Turner a liar who sought to cover up his racist beliefs and ties to white supremacists.

“What he did in this case was lie, lie, lie,” Hogan said.

Hal Turner took the stand today in his federal trial and accused the FBI of instructing him to make violent and racist statements. The North Bergen, New Jersey, radio talk show host is on trial for allegedly threatening three Chicago-based federal appeals court judges. In June of 2009, Turner said the judges “deserved to be killed” for a ruling they made in a gun control case.

In more than two hours of testimony, Turner described how he was recruited in 2003 by the FBI’s Newark-based Joint Terrorism Task Force. He said he was paid “in excess of $100,000″ by the FBI during his almost five years as an informant, according to The Record.

Turner’s first trial ended in deadlock back in December. A mistrial was declared after the jury deadlocked 9 to 3 in favor of acquitting Turner who was originally indicted in Illinois.

On February 16, The Record reported federal prosecutors sought to bar Turner from revealing his longtime role as a FBI informant to a jury during the current trial. “Prosecutors want U.S. District Judge Donald Walter to preclude Turner’s lawyers from referring to his background as a confidential source for the FBI,” the newspaper reported.