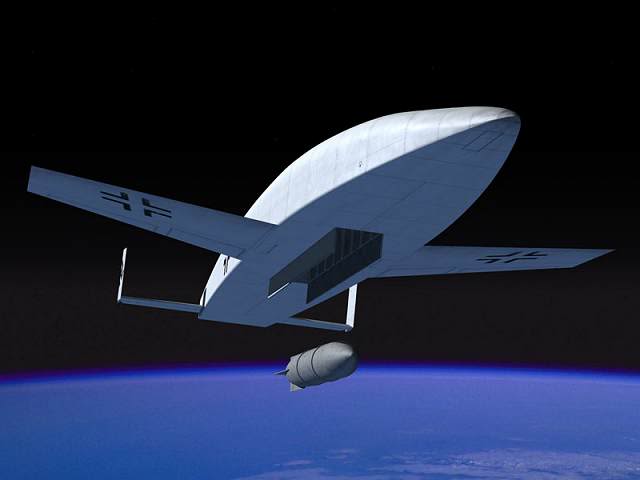 The US military appears to have temporarily given up on exotic scramjet powered hyper-plane and -missile notions for the purpose of suddenly blowing things up at short notice anywhere in the world. Rather, Pentagon boffins are now re-examining a plan once considered by the Nazis for the purpose of bombing America.

The boffins in question are our old friends at DARPA, the US military asylum for mad scientists, who see further into the future of warfare by standing on the shoulders of giants - if necessary, immense robot colossi or genetically engineered titanoid abominations of their own manufacture. In this case, however, they seem to be following a more conventional Isaac Newton-style policy of basing their work on that of great past practitioners in their field.

Very few groups have been more illustrious in the field of mad futuristic weapons than the Nazi rocketeers of World War II, and thus it is no surprise to find DARPA making a new push to resurrect one of their notions: that of the Boost-Glide extra-atmospheric suborbital weapons platform.

German boffins of the 1940s developed detailed plans (pdf) for a so-called Silbervogel ("Silver Bird") rocket bomber which would have soared high into space and then travelled many thousands of miles by skipping like a flung stone on water around the top of the atmosphere. It was thought by its designers that the amazing machine might be able to circumnavigate the globe like this, dropping off a bomb en route as it sailed above America; or at any rate make a landing in Japanese-held territory after such a raid. These abilities led to it being dubbed the "antipodal bomber" in some circles.

The Silbervogel plan was considered as part of Nazi aspirations to mount strikes against the USA - the so called "Amerika Bomber" project - but never actually flew. However the plans caused a good deal of activity by the rival superpowers after the war: perhaps most famously the X-20 Dyna-Soar project in the US, which would have used a Silbervogel-esque flight profile for global strike or surveillance missions. The X-20 would have launched vertically atop a conventional throwaway rocket; its Nazi predecessor was to be fired into the air by a powerful rocket catapult/sled affair running on rails.

In the event the X-20 didn't get off the ground either, but a rather less well-known Boost/Glide platform eventually did, namely the unmanned Boost Glide Re-entry Vehicle test of 1968. The BGRV lifted into space from Vandenberg airforce base in California atop an Atlas F missile rocket and re-entered over the Pacific, eventually splashing down in the vicinity of Wake Island some 3,000 miles away.

Project Arc Light rides again? What, you mean the one from Vietnam?

In general, though, the mission of global strategic strike is already well covered by more conventional ICBMs, as global surveillance is by spy satellites. But a nuclear-armed ICBM is a rather unsubtle tool, and even one fitted with a smaller conventional warhead would tend to cause global panic as it lifted off and streaked around the world to its destination - not to mention being rather expensive for routine use against modern Wars-on-Stuff type targets such as suddenly-emerging terrorist bigwigs or similar.

But more reasonable existing kit like submarine- or warship-launched cruise missiles or jets loaded with smart bombs is no good either. These things can take hours to arrive at the spot marked X, by which time the elusive terrorist, stolen WMD or whatever may have melted away again.

What's wanted, according to DARPA, is something which would fit into a US naval Mark 41 vertical launch tube of the sort used to pop off existing slowpoke Tomahawk cruise missiles. But it would have to carry a much smaller and more surgical 100-lb warhead, which would travel enormously faster - a minimum of 9,200 miles per hour, the equivalent of Mach 12 if we were talking about travel at sea level.

Mach 12 is far, far into the regime of hypersonics, faster than even the most exotic hydrogen-fuelled scramjets have yet flown. Such a missile could never be put into a Mark 41 launcher even if it could one day be built. DARPA's previous plan for a Mach 6 aeroplane running on normal fuel was cancelled on grounds that nobody really thought it was possible, and the ongoing X-51 WaveRider scramjet test vehicles - now delayed into this year - aren't expected to go faster.

But with the newly-announced "ArcLight" programme, DARPA aren't talking about flight in the atmosphere at all. Instead, a less ambitious BGRV type of effort is requested, with a smallish naval launch tube type rocket firing the pocket, unmanned Silbervogel/X-20 into space followed by hypersonic re-entry no more than 2,000 miles away. The US Navy's 8,500 Mark 41 tubes, distributed around the world aboard its cruisers, destroyers and submarines, should thus more or less blanket the planet with ArcLight coverage able to deliver an unstoppable 100-lb hypersonic warhead in less than half an hour from go.

On the face of it the idea seems fairly likely to be possible: Mark 41 tubes are used to launch SM-3 ballistic missile interceptors, which are well-known to be capable of sending small "kill vehicles" into space at hypersonic-equivalent velocities. Presumably it would be feasible to replace the kill vehicle on an SM-3 with a BGRV style hypersonic mini-smartbomb style affair, finally - in a small way - bringing to fruition the German dream of the 1940s.

Details on a planned industry day for the ArcLight project are available here in pdf for those interested. ®

The choice of the name "ArcLight" for this effort is a curious one. In recent military history, that term most commonly refers to the use of B-52 Stratofortresses to drop colossal loads of conventional bombs during the Vietnam War. The Vietnam ArcLight carpet strikes were often gratefully received by American troops on the ground - perhaps most famously when used against the People's Army of Vietnam forces besieging the US Marines at Khe Sanh - but were wildly indiscriminate in their effects.

The US Air Force nowadays uses the telling phrase "potential and actual enemy forces" when describing the many things that were blown up by B-52 Arc Light missions back in the 1960s and 70s. It's to be hoped that the modern DARPA ArcLight is going to be used a bit more selectively.