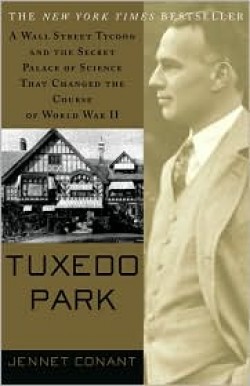 From Tuxedo Park: A Wall Street Tycoon and the Secret Palace of Science That Changed the Course of World War II, by Jennet Conant, Chapter 6, "Restless Energy," page 128:

"A call from Compton in early 1939 helped crystallize his plans. Compton had correctly sensed that Loomis was at loose ends and was casting about for new direction for his research. He had told Compton that his work on brain waves with Hallowell Davis, while far from complete needed to be carried on under the auspices of a hospital, and to that end he had donated most of his equipment to the Harvard Medical School. Compton suggested that, given the portentous events in Europe, it might be useful if Loomis looked into the present state of microwave technology, or radar (though the latter term had not yet been coined). Loomis was intrigued by the idea and began exploring the subject on his own."
********
" ... In the back of the book there is a bibliography she lists of all the scientific journals published by Alfred Loomis from the 1920's up to about 1937...all deal with radio-frequencies and EEG readings on the human brain! The most troubling aspect was that most of these were done in Germany! ... "

Think where it could be today with wireless technology. Electronic attack leaves no trace. I pulled some info off the web where the USAF did a dielectric of the human body to find out at what frequencies the organs in the human body resonate... why would they want that? Also, it has been mentioned by the science community that everyones brain has a unique signature like a fingerprint. They are all close but not exact...no two are alike. To let you know how long this has been going on you need to get a book called " Tuxedo Park" written by Jennett Conant...she is the grand-daughter of James Conant, he used to be the dean of Harvard University and was also close to those that made the A-bomb like Vannevar Bush of DARPA, Alfred Loomis who was the nephew of Henry Stimson(secretary of war), Oppenhiemer, Lawrence. Well anyway, in the back of the book there is a bibliography she lists of all the scientific journals published by Alfred Loomis from the 1920's up to about 1937...all deal with radio-frequencies and EEG readings on the human brain! The most troubling aspect was that most of these were done in Germany! ...

http://www.unexplained-mysteries.com/forum/index.php?showtopic=39104&mode=threaded&pid=587881
********
Wiki: Alfred Lee Loomis (November 4, 1887 – August 11, 1975) was an American attorney, investment banker, physicist, philanthropist and patron of scientific research. He established the Loomis Laboratory in Tuxedo Park, New York, and his role in the development of radar is considered instrumental in the Allied victory in World War II. He invented the Aberdeen Chronograph for measuring muzzle velocities, proposed the LORAN navigational system, contributed significantly (perhaps critically, according to Luis Alvarez) to the development of a ground-controlled approach technology for aircraft, and participated in preliminary meetings of the Manhattan Project. Loomis also made contributions to biological instrumentation—working with Edmund Newton Harvey, he co-invented the microscope centrifuge[2], and pioneered techniques for electroencephalography. In 1937 he discovered the sleep K-complex brainwave.
***********
Amazon.com Review of Tuxedo Park:

This must have been an extremely difficult book to write. Its subject, Alfred Loomis, never gave interviews during his lifetime and destroyed all his papers before his death. "Few men of Loomis' prominence and achievement have gone to greater lengths to foil history," writes author Jennet Conant. Had he not done these things, his name would be better known--and this probably wouldn't be the first biography about him. So who was Alfred Loomis? "He was too complex to categorize--financier, philanthropist, society figure, physicist, inventor, amateur, dilettante--a contradiction in terms," writes Conant. Loomis established a private laboratory in New York and hired scientists whose work in the 1930s wound up making possible both the radar and the atomic bomb. These developments were essential to Allied victory in the Second World War. Conant is perhaps the only person who could have pierced Loomis's obsessive secrecy and written this book; she grew up with Loomis's children and other members of his family. Her grandfather, Harvard president James Bryant Conant, was one of Loomis's scientists. Tuxedo Park is an important book about the development of military technology in the United States; admirers of The Making of the Atomic Bomb by Richard Rhodes and similar titles won't want to miss it. - John Miller