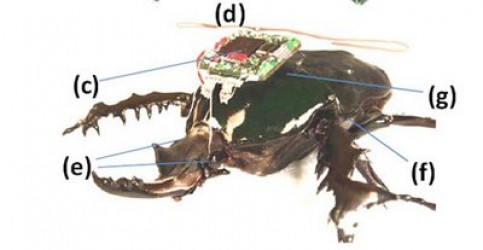 Berkeley University scientists demoed a remote-control Rhinoceros beetle at a conference this week, repeatedly flying the cyborgian creature ... It's far from the first foray into insect mind control, but by far the most precise—this specimen, commanded by six radio-actuated electrodes on the beetle's muscles and brain, could be piloted around the room like a tiny RC plane.

The hardware isn't much of a burden for the beetle, which is capable of taking flight with more than twice the 1.3g mass of the apparatus on board. The remaining payload will probably be filled with camera gear, as this project is funded by DARPA (natch) for surveillance purposes.