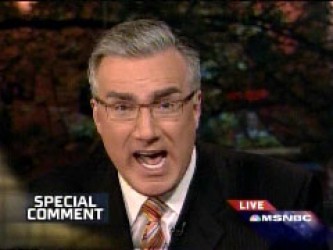 On Wednesday's Countdown, MSNBC host Keith Olbermann's latest "Special Comment" attack on President Bush accused the President of "panoramic and murderous deceit," and of "creating" an America that "includes 'cold-blooded killers who will kill people to achieve their political objectives,'" contending that "they are those in, or formerly in, your employ, who may yet be charged some day with war crimes." He further accused Bush, whom he referred to as having an "addled brain," of "laying waste to Iraq to achieve your political objectives" in an "insurance-scam, profiteering, morally bankrupting war." Outraged by Bush's declaration that he had given up playing golf out of respect for those killed in Iraq, Olbermann called on the President to "Shut the hell up!"

The Countdown host was responding to comments the President made during an interview with Politco.com. When asked what was the "worst that could happen" if U.S. troops were withdrawn from Iraq, Bush argued that extremists could feel "emboldened" to engage in "another attack on the United States," and referred to the "ideological struggle" in Iraq "against cold-blooded killers who will kill people to achieve their political objectives."

The MSNBC host thought it was insightful to take President Bush's words about terrorists and apply them to the Bush administration. Olbermann: "Mr. Bush, at long last, has it not dawned on you that the America you have now created, includes 'cold-blooded killers who will kill people to achieve their political objectives?' They are those in, or formerly in, your employ, who may yet be charged some day with war crimes."

Olbermann continued: "Through your haze of self-congratulation and self-pity, do you still have no earthly clue that this nation has laid waste to Iraq to achieve your political objectives? 'This ideological struggle' you speak of, Mr. Bush, is taking place within this country."

He soon accused the President of forming in Iraq "an American viceroyalty, enforced by merciless mercenaries who shoot unarmed Iraqis and then evade prosecution in any country by hiding behind your skirts, sir," and charged: "Terrorism inside Iraq is your creation, Mr. Bush!"

The MSNBC host referred to what he called Bush's "panoramic and murderous deceit" as he recounted recent Republican losses in Congress:

And as a final crash of self-indulgent nonsense, when the incontrovertible truth of your panoramic and murderous deceit has even begun to cost your political party seemingly perpetual congressional seats in places like North Carolina and last night Mississippi, you can actually say with a straight face, sir, that the members of Congress, "the political heat gets on and they start to run and try to hide from their votes," while you greet the political heat and try to run and hide from your presidency, and your legacy, 4,000 of the Americans you were supposed to protect are dead in Iraq, with your only feeble, pathetic answer being, "I was told by people that they had weapons of mass destruction."

Olbermann was most offended at the President's declaration that he had given up playing golf out of respect for those lost in Iraq, as the MSNBC host thought Bush instead should have chosen to give up the war effort: "Sir, to show your solidarity with them you didn't give up your pursuit of this insurance-scam, profiteering, morally and financially bankrupting war."

After accusing Bush of having an "addled brain," of "helping funnel billions of taxpayer dollars to lascivious and perennially thirsty corporations like Halliburton and Blackwater," and of "sending 4,000 Americans to their deaths for nothing," Olbermann concluded by advising President Bush to "Shut the hell up!" ...

Original headline: "Olbermann Accuses Bush of 'Murderous Deceit,' Should 'Shut the Hell Up'"