Verizon Spook William P. Barr has Long Been an Advocate of Spying on Civilians 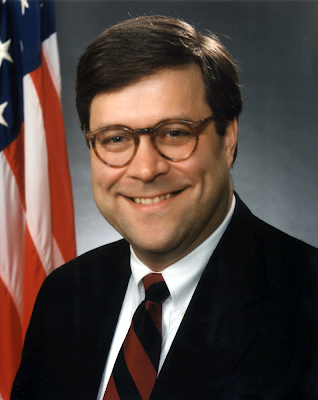 William P. Barr is executive vice president and general counsel of Verizon, a position he has held since the company’s formation in 2000. He heads the legal, regulatory and government affairs group. Barr helped steer the merger negotiations that formed Verizon. He also framed and executed the litigation strategy that paved the way for deregulation of telecommunication companies and the wide-scale deployment of broadband.

Barr began working in telecommunications in 1994, when he joined GTE as executive vice president of government and regulatory advocacy, general counsel. He served in that capacity from 1994 until GTE merged with Bell Atlantic to become Verizon in June, 2000. At GTE, Barr provided legal advice to senior management and the Board of Directors, directed activities of the Legal Department, led all legislative and regulatory advocacy activities, and was responsible for the Corporate Secretary's department and the Government Affairs staff in Washington, D.C.

Prior to his work in the telecommunications industry, Barr was attorney general of the United States under President George Bush, was on the White House Domestic Policy Staff under President Reagan, and served in the Central Intelligence Agency.

As attorney general from 1991 to 1993, Barr established innovative programs to combat violent crime and set significant new enforcement policies in a wide range of areas, including financial institutions, civil rights and antitrust merger guidelines. He started with the Department of Justice as assistant attorney general in charge of the Office of Legal Counsel in 1989, and then served as deputy attorney general before his appointment as attorney general in November 1991.

Barr started his legal career as law clerk to Judge Malcolm Wilkey of the U.S. Court of Appeals for the District of Columbia. In 1978, Barr joined the law firm of Shaw, Pittman, Potts & Trowbridge law firm in Washington, D.C. as an associate. From 1982 to 1983 he served on the White House Domestic Policy Staff under President Reagan, and then returned to the firm where he practiced as a partner until 1989.

Barr serves on the board of Selected Funds and is a member of the bar in the District of Columbia, New York, New Jersey and Virginia. He also serves as a Trustee of the Inner-City Scholarship Fund of New York.

One of the highest-level executives at Verizon Communications ... has strong, decades-long ties to Central Intelligence, Congress and the Department of Justice ... Additionally, the same official has acted in an advisory capacity to the government as a private citizen for over ten years since leaving office, arguing that restrictions to federal domestic surveillance capabilities be loosened, especially in cases involving terrorism. ... one of Verizon's highest-level executives has a long public record of supporting domestic surveillance, especially in cases involving the suspicion of terrorist activities.

Verizon Executive Vice President and General Counsel William P. Barr began his career as an analyst for the CIA in the mid 1970s, going on to become an assistant legislative counsel for the agency. He has also held a number of other public positions since then, including those of domestic policy adviser to President Ronald Reagan and even U.S. Attorney General under George Herbert Walker Bush.

When that position expired after Bill Clinton became President in 1993, Barr went to work as general counsel for GTE, the company that would later merge with Bell Atlantic to form Verizon Communications, where he now serves as executive vice president and general counsel. In those capacities, though, he has maintained ties with officials in Washington who have repeatedly called upon his testimony when crafting anti-terror legislation.

That testimony reveals a record of sympathy with the sorts of legally contentious activities the NSA is alleged to be conducting with wiretapping and data mining programs.

A history of arguing for surveillance

On June 12, 1995, Barr testified before the House Judiciary Committee in support of a piece of legislation called "The Comprehensive Antiterrorism Act of 1995", which amended various sections of the U.S. Penal Code to extend law enforcement capabilities and increase criminal penalties in cases of terrorism. Part of the act authorized the use of emergency and roving wiretaps in cases of criminal conspiracy.

Barr's testimony explicitly endorsed both modes of surveillance.
On the specific issue of temporary emergency wiretaps, Barr noted:
Emergency wiretap authority exists under current law with respect to a range of criminal activity… Existing emergency authority has been sparingly used and I am not aware of any indication of abuse. It is clearly appropriate that the same emergency authority that applies with respect to Mafia conspiracies also applies to terrorist conspiracies.

Barr's testimony about roving wiretaps reads, "While this concept sounds sinister, it is really quite sensible and in many cases essential." He adds that such a measure, "simply allows the government to obtain a warrant that authorizes following the targeted individuals' communications rather than staying anchored to a particular telephone," and that legal safeguards will forestall abuse when "it is impractical to identify a particular phone. This is perfectly in line with constitutional protections. After all, the right to privacy guaranteed under the Fourth Amendment is an individual's right to privacy; it is not an inanimate object's (a telephone's) right to privacy… Roving wiretaps targeted at particular suspects rather than specific phones should not cause alarm."

Barr's testimony was cited in the official congressional record as justification for the elimination of a subsection of the penal code that exempted First Amendment-protected activities from these sorts of legal intrusions.

The following year, testifying at the Hearing of the Commission on the Roles and Capabilities of the United States Intelligence Community, Barr advocated the use of intelligence information in domestic law enforcement proceedings in cases of suspected terrorism.

In November 2001, shortly after the September 11 terrorist attacks, Barr defended executive-branch war-time actions before the Senate Judiciary Committee, including controversial measures such as: the use of military tribunals to try suspected members of al Qaeda; suspension of criminal justice procedures which, he noted, "will frustrate our fight against al Qaeda"; and the withholding o
f operational details by the Attorney General of ongoing criminal investigations. The USA PATRIOT Act ultimately codified powers that closely mirror his suggestions, and he has since gone on record in support of that legislation as well.

In 2003, testifying before the House Select Committee on Intelligence, he issued a strong defense of executive privilege, noting, "I believe that the critical legal powers are granted directly by the Constitution itself, not by Congressional enactments. When the Nation itself is under attack by a foreign enemy, the Constitution vests the broadest possible defense powers in the President...No foreign threat can arise that the Constitution does not empower the President to meet and defeat."

Barr's writings lamented a "30 year campaign to curtail the powers of our security agencies," many of which "denied or made light of the notion that the President had Constitutional responsibility for judging what was required to protect the nation's security." "FISA," he noted, "purported to supplant Presidential discretion with Congressionally crafted schemes whereby judges became the arbiter of national security decisions." He lauded the PATRIOT Act in that testimony, which, he said, "fixed many of the problems with FISA and filled a number of other gaps in our surveillance and intelligence collection laws."

FISA, which stands for the Foreign Intelligence Surveillance Act, is the piece of legislation that provided for the creation of secret courts to provide warrants in cases where domestic surveillance is required to investigate and prevent foreign acts of terrorism. The Bush administration has been widely criticized for failing to seek warrants from the FISA courts in its prosecution of the Global War on Terror. Its actions in that regard have recently been ruled unconstitutional in federal court, and an attempt to legitimate them in the Senate was defeated in the Judiciary Committee last week.

Barr noted that "While the PATRIOT Act was a major step forward and remedied FISA's most severe problems, I believe FISA remains too restrictive in a fundamental respect. It still requires that the government establish 'probable cause' that an individual is either 'a foreign power' or an 'agent of foreign power'", arguing instead that FISA should "apply to foreign individuals", who, acting as terrorists, are "not part of 'the people' and thus not protected by the Fourth Amendment" (emphasis in the original).

Though Barr had, in his 1995 testimony, lauded legislation that created a window for emergency wiretaps before the issuance of a warrant in conspiracy cases—legislation that is still in effect—his 2003 testimony excoriates FISA for requiring "the government to go to a judge to obtain an order," which, he says, "makes absolutely no sense since it is precisely in the terrorism context that the need for speed is most acute."

However, FISA and the Comprehensive Antiterrorism Act of 1995 identically allow for temporary surveillance to be conducted without a warrant under dire circumstances. Barr's critique ignores that window.

Many months after this testimony President Bush's chief rationale for ignoring FISA has been a contention, strikingly similar to Barr's, that the urgency of terror cases does not allow enough time for the acquisition of surveillance warrants. It is a rationale that has been widely criticized for ignoring the very same 72-hour window during which the Attorney General is authorized to conduct surveillance without a court order in the event of an emergency.

Barr did not return a request for comment before press time.

In an interview with RAW STORY, Caroline Fredrickson, director of the Washington legislative offices of the ACLU, described Barr's testimony in support of executive privilege as "breathtaking." "What does he define 'under attack' as? What does he see the president doing with that much power, and where does he read this in the constitution?"

She added that, long before the Bush domestic surveillance programs were described in the press, the administration had testified that FISA—which has been amended and updated many times since it was first made law in 1978—was a nimble law, and easy to work with.

"This is an ex post facto attempt to explain why it was necessary for President Bush to break the law," she argues. "Under FISA, if they feel like they need to move quickly, they can move quickly. It's a wonderful thing and extraordinarily advantageous to the government. They have granted tens of thousands of warrants and denied a handful."

Still unclear, though, is how compliant the major telecommunications companies—or their subsidiaries—have been with NSA requests. While the USA Today story was ultimately partially retracted, that paper has not abandoned its contention that a major surveillance program exists and that only one company (Qwest communications) was approached by government officials seeking telephone records and refused to participate.

"I don't think the USA Today story was actually repudiated," said Fredrickson. "It's an open question what the participation was, but we know there was some participation somewhere."

The National Law Journal has listed Barr as one of the 100 most influential lawyers in the country whose "close ties with key members of Congress" have been critical in deregulations that have benefited the private-sector companies he's worked for since leaving public service.