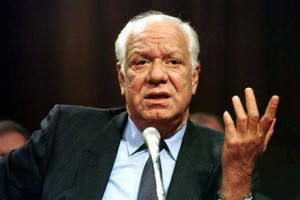 MEXICO CITY -- Adolfo Calero, a former Coca-Cola executive who led the largest anti-Sandinista Contra rebel force in 1980s Nicaragua and served as one of its most articulate lobbyists in Washington, has died. He was 80.

Calero's career mirrored the tumultuous history of Nicaragua as it emerged from a sleepy Central American backwater to the center of the Cold War struggle. He opposed one right-wing dictatorship, then opposed the leftist rebel movement that replaced it, serving as civilian commander of the U.S.-backed Contra rebels. And thanks to his close ties to the Reagan administration, he eventually got caught up in one of the darkest chapters of U.S. foreign policy, the Iran-Contra scandal.

In his final years, Calero told interviewers that he ultimately felt betrayed by his American friends, and unrepentant of his role in a bloody and largely unsuccessful mission.

"I concluded (during peace talks that began in 1988) ... there was not going to be a happy ending, because when we had the strength to defeat this regime," the U.S. Congress turned its back "on us," he said in an interview with the Managua newspaper El Nuevo Diario in 2009.

He was alluding to a decision by Congress to discontinue aid to the Contras.

"If it hadn't been for the Contras, who knows what would have happened here," he said. "The barrier that stopped the expansion (of the Sandinista movement) was the Contra."

The Sandinista government did fall, to a democratic vote, several years later, although its leader at the time, Daniel Ortega, returned to the presidency in 2007 and was re-elected last year.

Calero was born in December 1931 in Managua to a well-known Nicaraguan writer. He became a successful businessman, managing the Coca-Cola bottling plant in Managua, and a prominent member of Nicaragua's Conservative Party.

He also formed part of the civilian movement to rid the impoverished country of the dictatorial Somoza dynasty that ruled Nicaragua through much of the first half of the 20th century. He was a friend and tennis partner of legendary newspaper editor Pedro Joaquin Chamorro, whose assassination by Somoza forces galvanized the movement.

And Calero was friendly with Anastasio Somoza - but also kept close tabs on the changing mood in Washington as the government of President Jimmy Carter took office, ending U.S. support for the dictator.

In 1979, Somoza was toppled and replaced by guerrillas of the Sandinista National Liberation Front. Calero soon fell out of sorts with them, saying later he had hoped for a democratic transition after the Somoza overthrow.

In late 1982, Calero abandoned Nicaragua in self-imposed exile as the Sandinistas were confiscating his home and other property. By 1983 he declared his leadership of the Nicaraguan Democratic Force, a Contra rebel group formed and financed by the CIA. He was considered one of the more hard-line members of the force and at times clashed with other leaders as well as his American backers.

"My idea would be to take the nine comandantes, plus the next nine down, and the next and the next, about 60 people or so of the Sandinista power structure, bind them up and put them on an airplane and drop them off in Havana," Calero told writer Shirley Christian in 1983, as recounted in her book "Nicaragua: Revolution in the Family." "That would solve our problems. ... That is what I want."

The war would, of course, turn out to be much less surgical and cost thousands of lives. The U.S. involvement in attempting to overthrow the Sandinistas also led to a secret and illegal operation in which U.S. agents sold weapons to Iran and gave some of the money to the Contras.

Calero worked closely with fired White House aide Oliver North, one of the major Iran-Contra figures who worked to raise millions of dollars for the Contras after Congress cut off aid. At one point, Calero gave some of the money back to North, in the form of unsigned traveler's checks, after North said he needed to fund other Contra operations and buy the freedom of American hostages in Lebanon.

"I reacted immediately, saying that Nicaraguan hostages of the Sandinistas (and) American hostages of these groups in Lebanon were one and the same, and that I would be happy to help in their liberation," Calero testified to Congress in 1987 hearings on Iran-Contra. "I felt deeply for those poor people who had been kidnapped."

Calero returned to Nicaragua to live in the early 1990s, after the Sandinistas left office.

He is survived by his wife, a daughter and grandchildren.