Civil Rights » NSA Data Mining has Nothing to do with Terrorism

NSA Data Mining has Nothing to do with Terrorism

Electronic Frontier Foundation: "NSA's Vast Surveillance Powers Extend Far Beyond Counterterrorism, Despite Misleading Government Claims": "Time and again we’ve seen the National Security Agency (NSA) defend its vast surveillance apparatus by invoking the spectre of terrorism, discussing its spying powers as a method to keep America safe.  Yet, the truth is that counterterrorism is only a fraction of their far broader authority to seek 'foreign intelligence information,' a menacing sounding term that actually encapsulates all sorts of innocuous, everyday conversation. The New York Times demonstrated this disconnect last week, reporting, 'the [leaked NSA] documents make clear, the focus on counterterrorism is a misleadingly narrow sales pitch for an agency with an almost unlimited agenda. Its scale and aggressiveness are breathtaking.' ... ”

Huffington Post, Nov 1, 2013: "America as Economic Spy: NSA's Mission Is Self-Aggrandizement, Not Fighting Terrorism": "Back in June, Gen. Keith Alexander claimed that NSA's bulk collection of call records and internet activity disrupted 54 'terror plots.' In October, the Senate Judiciary Committee got Alexander to admit that this claim was wrong and misleading.Sens. Ron Wyden (D-OR) and Mark Udall (D-CO) said the NSA dragnet call data program 'played little or no role' in these 54 cases. It's not just the lies about this spying having foiled terror plots. NSA conducts surveillance that could not conceivably have anything to do with fighting terrorists."

Huffington Post, Oct 23, 2013: "The NSA's Big Terrorism Claim Doesn't Hold Up," Panorama.am: "NSA practices cannot be excused as 'fighting terrorism'": "The NSA has attacked key European institutions such as the EU parliament and banking system, using malware to find out all there is to know about other countries in a power game ... " TruthDig: "NSA Spying: It's About the Money, Honey": "European Union Commissioner for Justice Viviane Reding says the NSA surveillance of top allies has nothing to do with terrorism, and may instead be an effort to seek advantages for American corporations. ... " CNN (blog): "Does the NSA thwart terrorist attacks?" [Re Keith Alexander's lies to congress concerning the number of terrorist attacks averted by NSA data mining].

NSA Spying has Nothing to do with Terrorism, Greenwald tells Amanpour

“Is Angela Merkel a terrorist? Are sixty or seventy million Spanish or French citizens terrorists? Are there terrorists at Petrobras?” he asked rhetorically. “This is clearly about political power and economic espionage, and the claim that this is all about terrorism is seen around the world as what it is, which is pure deceit.” 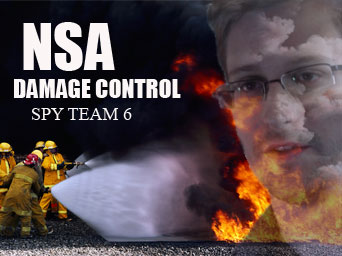 Spying by America’s National Security Agency does not have “anything to do with terrorism,” Glenn Greenwald, the activist journalist who broke the story, told CNN’s Christiane Amanpour on Monday.

The latest revelations of American spying involve the alleged taping of German Chancellor Angela Merkel’s personal mobile phone and that the U.S. gathered data about 60 million Spanish phone calls in a single month, which comes after similar reports from France. ...

“It is not true that every country intercepts the personal communications of their democratically elected allies,” Greenwald told Amanpour, referring to the oft-repeated criticism put forward by true believers that “everyone does it.”

“And it’s definitely not the case that every country mass, bulk collects the communications of millions of innocent people in virtually every country in the world. It’s something that the world didn’t know, and now they do know, and that’s the reason why U.S. officials are so angry,” he said. “Not because it damaged national security but because it damages their reputation and credibility around the world.”

Greenwald also rebuffed the criticism that he is recklessly putting people’s lives in danger by revealing America’s spying tactics.

He said that Snowden had asked him to be “very scrutinizing and judicious,” and that he had only made public about 200 or 250 documents out of a total of “many, many, many thousands.”

“Ever since 9/11, British and American officials have screamed terrorism over and over and over every time they get caught doing bad things they shouldn’t do,” Greenwald said. “Every terrorist who’s capable of tying their own shoes has long known that the U.S. government and the U.K. government are trying to monitor their communications in every way that they can.”

“What we revealed is that the spying system is largely devoted not to terrorists but is directed at innocent people around the world.” ...

“As a journalist, my question is not ‘How can I best help the U.S. government,” he told Amanpour. “My question is, ‘How do I best inform people around the world of the things they should know.’”

Far too many journalists, he said, are willing to leave their reporting at “'American officials told me yesterday.'” ...