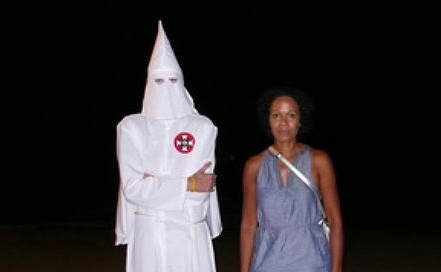 A biracial filmmaker says she wanted to confront racism face-to-face, so she traveled to Germany to talk to Neo-Nazis and visited America, where she met with a member of the Ku Klux Klan.

Mo Asumang’s documentary is titled “The Aryans,” and she believes that an effective way to combat racism is to literally make racist people meet with a type of person they have a problem with.

“These people don’t actually talk to Jews. They don’t talk to black people. They don’t know their enemy, so-called enemy,” Asumang says in a BBC News report. “So what they do, when they talk to me, they talk to reality, and that’s the first thing they have to survive.”

In Germany, demonstrators had varying reactions to her presence. Some were cold and simply ignored her, while others were somewhat impatient.

However, Asumang, a daughter of a black Ghanaian father and a white German mother, did get one demonstrator to tell her what he would like to see happen with minorities or people of mixed race like her.

“The prognosis is that when a nation re-nationalizes, people like you tend to immigrate to multi-ethnic countries or melting pots like the USA,” he reportedly said, adding that deportation notices would be sent out to facilitate the move.

Forcing a racist to face a biracial person, Asumang said, “totally confuses them because I’m not like they want me to be.”

“So I stand there, maybe I smile at them, and because it’s a human reaction, you wanna smile back. So I see them trying to hold down the smile, and that’s something very very interesting,” she added.