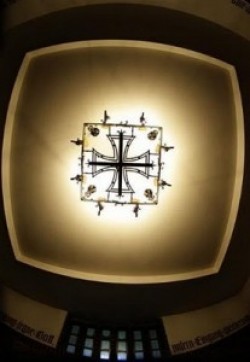 BERLIN (Reuters) - A rundown Protestant church built to glorify Hitler's Third Reich is hoping for a new lease of life as a memorial against Nazi oppression.

The place of worship in southern Berlin is a unique example of the Protestant Church's adoption of Nazi propaganda, with furnishings rich in symbolism favoured by the dictatorship.

From the entrance hall chandelier shaped like an iron cross military medal to the wooden carving of a Wehrmacht soldier on the pulpit standing on the right-hand side of Jesus, the atmosphere is heavy with reminders of Hitler's rule.

The brown-brick church that once reverberated to the swell of Nazi anthems badly needs repairs. This week, the parish launched a bid to secure fresh investment to rescue the building completed in 1935, two years after the Fuehrer took power.

"The building shows how such a murderous ideology could infest itself in a 'normal' society," said local pastor Hans-Martin Brehm.

"I think every generation risks doing terrible things if it's not mindful of the past," he said.

"If nothing's done, it's going to collapse," he said.

Brehm wants the Martin Luther Memorial Church to become a place of remembrance that is used for regular cultural events, not a museum that he says would render it a "dead stone" relic.

Given the building's link to the Nazi era, it is a strong candidate for public funding, said Anna Maria Odenthal at Berlin's office for the conservation of historical monuments.

The building's origins go back to the anti-Semitic Deutsche Christen (German Christian) movement which claimed to have hundreds of thousands of Protestant members by the mid-1930s.

A study by historian Manfred Gailus calculated that about a quarter of Berlin's Protestant parishes were run by pro-Nazi clergy, with many others acquiescent.

Towering over the church's chancel is a "victory arch" of tiles decorated with images that alternate from traditional Christian symbols to the blank faces of helmeted soldiers and Nazi stormtroopers from the brown-shirted Sturmabteilung SA.L.

According to locals, an image of Protestant reformer Martin Luther inset in the wall of the entrance hall was replaced by Hitler's face. Luther's likeness has since returned.

Swastikas that once adorned the church have also been removed. The Nazi symbol is banned in modern Germany.

But many other reminders of the period remain.

On a raised platform above the entrance is an organ first played at the Nuremberg Nazi party rally of 1935 -- where anti-Semitic race laws where passed.

Yet despite its purpose-built design, the church has never become a shrine to neo-Nazis, nor was it a shining example of obedience to Hitler's regime, said Brehm, 55.

"The parish rejected all the mass baptisms and uniformed parades, apart from when they were officially prescribed. They went on in the neighbouring churches," he said.

Just weeks after the infamous Jewish pogrom in November 1938 "Reichskristallnacht" (Night of Breaking Glass), the local pastor wed a Jewish woman to an "Aryan" German in the church.

"That was strictly forbidden then," said Brehm.