Mussolini and the Rise of Fascism, by Donald Sassoon 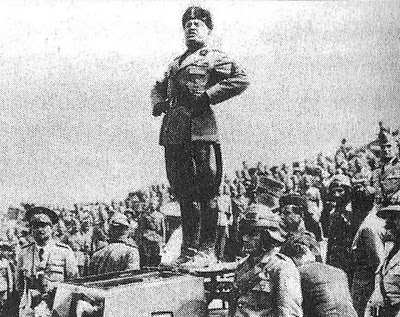 LIKE MANY of us, I suspect, I've always had the notion that Benito Mussolini came to power in Italy at the end of 1922 by marching into Rome at the head of a huge column of armed "blackshirts" before whom the democratic government crumbled. But, according to Donald Sassoon, it wasn't like that. Most of the fascists arrived in Rome by special trains. The ones who did march were a rain-soaked raggle-taggle bunch with hardly a modern weapon among them, and who could have been easily stopped by the army. In fact, some of them might have starved to death on the road if they hadn't been fed by friendly soldiers and police.

And far from sharing the hardships of his followers, Benito Mussolini, who was already an MP, arrived in Rome by overnight train from Milan and was whisked by limousine to the palace where King Victor Emmanuel III swore him in as head of a coalition - not a fascist - government. Mussolini then declared himself the king's "loyal servant". All of which made me realise I knew little about the rise of fascism in Italy - the subject of Donald Sassoon's latest book.

And very good it is too. Short, but tautly written and strong on salient fact, Sassoon does well to remind us that Italy was one of our allies in the first world war and that the Italians fought a brutal campaign against the Austrians in the south Alpine passes between 1915 and 1918. Italian casualties were huge - 650,000 dead and a million wounded - and one of the troops on the front was Corporal Benito Mussolini of the elite Bersaglieri. Young Corporal Mussolini (like young Corporal Adolf Hitler) left the army determined to make changes.

I particularly liked Sassoon's description of postwar Italy as a tired state beset by problems: an ailing economy, nervous capitalists, huge emigration, the hostility of the Roman Catholic church, a dread of Soviet-style revolution, a fragmented political system and a working population made uneasy and restless by the impact of the first world war. In these conditions it's hardly surprising that Mussolini's fascist nostrums had their appeal.

Sassoon offers some figures on the kind of folk who donned the black shirt in 1921. Here's how they break down: 24% rural workers; 15.5% industrial workers; 14% white-collar workers; 13% students; 11.9% small farmers; and 9% shopkeepers. The proportion of students (which includes senior schoolchildren) was, as Sassoon points out, "a much higher proportion than any other group in the population". The young were - and maybe still are - susceptible to the dark glamour of totalitarianism.

And while I had heard of the poet Gabriel D'Annunzio and even read some of his poetry (in translation) I had never heard of his wacky post-war venture at the head of a band of fascists to secure for Italy the city of Fiume which was also claimed by Yugoslavia. D'Annunzio went on to occupy the Yugoslav islands of Arbe and Veglia and then to declare war on Italy itself. The "war" was brought to an end when the Italians dropped a few shells on the poet's headquarters, after which D'Annunzio returned to Italy to general acclaim.

But there was nothing comic-opera about most of Mussolini's zealots. In the years before they came to power, they beat up and killed their opponents, ransacked opposition newspapers, burned down buildings and institutions they didn't like and generally rampaged across the land. The ineffectual Italian government seems to have been unable to stop them, a fact which confirmed the blackshirts in their belief that violence worked.

Whether it should have worked remains an open question. Sassoon explores at some length why the mild, bookish little monarch (whose passion was collecting coins) refused to sign a declaration of martial law to stop the fascist march on Rome. Whatever the reason, Victor Emmanuel III refused to sign and the fascists walked into Rome and into power - to the cheers of the Roman crowds.

Mussolini soon made his intentions clear. In his inaugural speech to parliament he announced: "I should warn you all that I am here to defend and develop the revolution of the Blackshirts " He went on to boast of his "300,000 armed youth ready for anything and waiting mystically for my command".

Within a few years Mussolini had set up the fascist dictatorship that crushed the last vestiges of Italian democracy and eventually dragged Italy into a ruinous war against the Western democracies and the Soviet Union. His only ally was his fellow dictator, Adolf Hitler, who despised him. Mussolini's career ended in him being shot to death by communist partisans and being strung up in the forecourt of a petrol station near Milan.

My only complaint about the book is its lack of information about Mussolini himself. I could have done with more about il Duce's family background, education etc. I got no sense of the personality of the man. Every now and again I felt I was reading Hamlet without the Prince of Denmark.

Still, Donald Sassoon plainly knows his stuff. This book is a well-researched and accomplished work. It's also generously annotated, properly indexed, decently illustrated and with an extensive bibliography. It should be read by anyone interested in the unsavoury history of 20th century Europe.