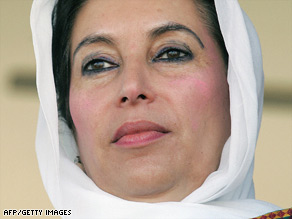 ISLAMABAD: A fresh probe has uncovered the role of nine men, including an army brigadier, in the December 27, 2007 assassination of former prime minister Benazir Bhutto. The assassination plot was hatched in the official residence of the army brigadier mentioned in the investigation report.

The findings of the probe, conducted under the interior ministry’s supervision, have deliberately been kept under wraps — even from the ruling Pakistan Peoples Party’s leading lights. The report is in the possession of Interior Minister Rehman Malik and has only been seen by President Asif Ali Zardari in its entirety.

Earlier this week, President Zardari temporarily shelved plans to share the contents of the inquiry report. The president was keen to first take the army leadership into confidence before ordering the arrest of certain uniformed personnel over their alleged involvement in Benazir’s assassination.

Five of the nine co-conspirators are still alive, according to the inquiry report. They were the ones who hired the killers and gave them shelter and logistical support. The five men will now be formally charged-sheeted and put on trial. The remaining four men, including those sent to kill Benazir, are already dead.

Both logistical support and rehearsals for the murder were arranged by uniformed persons, who were part of the plot. Militant groups, which were working closely with the nine plotters, provided the manpower.

It has also been confirmed to The Express Tribune that the joint investigation team had traced two new mobile phone sims that were used to communicate on the day Benazir was assassinated.

Sources said that the Federal Investigation Agency (FIA) had drawn up a tough questionnaire for General Pervez Musharraf on the basis of investigations conducted by the joint investigation team. The questions were framed once the role of the nine plotters became clear and the inquiry team managed to lay its hands on the main accused who was part of the plot to eliminate Benazir.

Although Zardari had agreed in principle to make the report public, he wanted to give it some more thought. The president and his party leaders are keen to fight off the somewhat popular impression that they are disinterested in tracking down Benazir’s killers.

At one stage, President Zardari had made up his mind to unveil the inquiry report on Benazir’s third death anniversary, sources said. But he changed his mind at the eleventh hour and told the interior minister to drop the idea for the time being. The absence of Bilawal Bhutto from the CEC meeting was only used as a pretext to delay the presentation of the report. The president did not want the present army leadership to be caught off guard when the names of certain uniformed persons feature in the report.

For their part, the military leadership signalled their willingness to cooperate with the civilian government and put any accused military officer on trial, sources said. Even when a cabinet inquiry team led by Rauf Chaudhry was constituted, the military leadership had backed the initiative to an extent that the director general of Military Intelligence, Nadeem Ejaz, was made available to a three-member inquiry committee.

Sources said that the committee chairman was even told by the top military authorities that a serving lieutenant general would be available round the clock for as many days as they need for questioning, till they reached any conclusion about his innocence or guilt.

The interior minister refused to comment on the inquiry report on the pretext that the matter was in a court of law. When asked whether he intended to share the findings of the probe with the PPP’s CEC members, the minister said he would definitely place the inquiry report before his party’s elders.

NUKEGATE: THE PERILS OF WHISTLEBLOWING