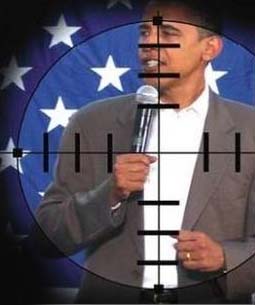 Daniel Cowart, 20, of Bells, Tennessee and Paul Schlesselman, 18, of West Helena, Arkansas entered their pleas before a Memphis judge a day after they were charged with seven counts of federal law violations including planning to kill a presidential candidate, conspiracy to rob a federal firearms licensee, conspiracy to transport and transportation of a firearm across state lines with the intent to commit a crime.

The two men, who are being held without bail, face as much as 50 years in prison if they are found guilty of all charges. No trial date has yet been set.

Cowart and Schlesselman, who have told investigators they have "very strong beliefs regarding 'White Power,'" were arrested on Oct.. 22. Prosecutors say the two met online through a "mutual friend" and began discussing robbing a gun shop and using the stolen ammunition to go on a "killing spree" of African-Americans, which would involve as a final act the assassination of Obama.

The Bureau of Alcohol, Tobacco, Firearms and Explosives (ATF) in Tennessee only announced their arrest on Oct. 27, or eight days before election day. It was the second assassination attempt against Obama thwarted by authorities since the Illinois senator secured the Democratic nomination in June. A 22-year old man, Raymond Hunter Geisel, was charged in August in Miami for threatening to kill Obama.

http://www.allheadlinenews.com/articles/7012950496•••" ... Obion County Sheriff Jerry Vastbinder says they were separated from other inmates at the request of federal authorities. ... "

The Arkansas Democrat-Gazette reported Sunday that 20-year-old Daniel Cowart of Tennessee and 18-year-old Paul Schlesselman of Arkansas are under the lockdown for their protection.

Obion County Sheriff Jerry Vastbinder says they were separated from other inmates at the request of federal authorities.

They can leave their cell for only an hour to watch television or use the phone. The sheriff says they have caused no problems since arriving about two weeks ago.

They have pleaded not guilty to weapons charges and threatening a presidential candidate. They could face 50 years in prison and fines if convicted.