” … In 2005 Gilbert Baker asked the 1st Division Faulkner County Circuit Court for “leniency and mercy” for a campaign worker of Baker’s who repeatedly beat his female victim, held a knife to her throat, smothered her until she threw up, and using a cigarette lighter burned her multiple times. … “ 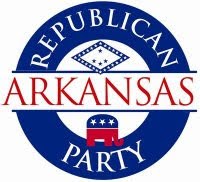 Now people wonder why Arkansas Democrats do so well? Well it’s quite frankly because all the state’s Republicans are utter radicals, I mean true radicals. Many Arkansas state Democrats are actually fairly standard Republicans, like State Sen. Bob Johnson, but they are not in the Republican party because it has such a radicalized base.

In Arkansas being a Republican pretty much, with occasional exceptions, means being a radical. We’ve already seen Kim Hendren, a State Senator, dismiss Schumer as that “Jew” and State Republicans defend him on the blogosphere. We’ve seen the craziness of Jim Holt and Asa Hutchinson, (Hutchinson by the way, spent most of his time as a drug Czar trying to prosecute 80 year old women in California for medicinal uses of Marijuana). They are too conservative and they have a passion for hypocrisy and bigotry like no others. I remember recently Paul Greenburg of the Democrat-Gazette criticized, yes, criticized Gay Rights opponents for listing how to contact lawmakers who supported it on a website and in the same sentence he managed to include bigotry in the form of “the traditional definition of marriage” as a legitimate reason to deny tax paying citizens equal legal rights. Such blatant reason-twisting logic is what Greenburg is famous for, famous for finding ways to criticize any liberal group while being a huge proponent and apologist for the Conservatives, he makes his God-Given goal to promote conservatism in the Gazette.

Now I would like to you all to meet the new highly touted GOP candidate, State Sen. Gilbert Baker. Sounds like they have a good candidate right? They finally found a sensible one, I mean good relations with some conservative Democrats, a good statewide profile as former Chairman of the State GOP, (and he did a wonderful job, losing all statewide offices including the two they already held, failing to pick up Senate Seats they should have picked up, and losing seven house seats to be relegated to 26 seat minority in the 100 member AR-State House, though they have since gained one or two of those back).

But so he has more experience, he’s been in the limelight, can speak without sounding like an idiot or devolving into racial epithets, can raise money, has the connections, sounds good right? And he’s two points ahead in early polling despite being known to only 25% of the population.

Well not so good when the campaigning starts. First off he did piss off a lot of people in Republican bastion Benton County when back in 2006 he back-stabbed moderate Republican State Senator Dave Bisbee, (a frequent ally of Huckabee who was instrumental in getting compromises passed in the Senate), over what was ostensibly purity reasons. It was an interesting case where many Democrats were supporting Bisbee and a select group of Republicans came in to help get a possibly more conservative Democrat the position, with Baker leading this. In the process he cost Benton County a Co-Chair of the Budget Committee, (Bisbee had to resign), and he all around screwed them over influence wise. So yes, whatever some people may say, I know for a fact many people in Benton got pissed off permanently at Baker and Bisbee certainly will not be helping him.

Second, (things get better as I go along), the University of Central Arkansas, in his hometown of Conway, is in the midst of what has been described as the biggest scandal in state government in a decade, and while he is not in charge or involved, even being connected to UCA is enough to cost a person 2-4 points in the polling right now, so toxic an issue it has become with voters.

But that’s all tame little stuff, normal political stuff, that’s pretty much what you expect to come up as a minimum when someone goes after a higher office.

This isn’t, the next issue is revolting and disturbing and it will be the key issue Lincoln should make:

Recently, Baker sent out a press release claiming the issue of women’s rights is one he takes “seriously”. However, in 2005 Gilbert Baker asked the 1st Division Faulkner County Circuit Court for “leniency and mercy” for a campaign worker of Baker’s who repeatedly beat his female victim, held a knife to her throat, smothered her until she threw up, and using a cigarette lighter burned her multiple times. Baker testified repeatedly as a character witness to help the defendant, also an elected Republican constable. The defendant was accused of rape, and convicted of kidnapping and assault against a Faulkner County woman. According to Circuit Court documents, Baker testified twice for the man, after knowing the horrible facts of the case and even admitted the defendant had “done wrong.”

Please have the sense not to vote for Lincoln and let a deranged conservative in, if you live in AR.

P.S. Please vote in the poll, even if you don’t care, I use it as a counter to determine readership. Just as a courtesy even vote, so I have some proof I’m not talking to a brick wall.

Previous Article
The University of Astroturf: FreedomWorks “Educates” the Tea-Baggers
Next Article
Op-Ed: Health Care Reforms are the Antithesis of Nazi Practice