McCain Has a Record – His Votes Against Veterans 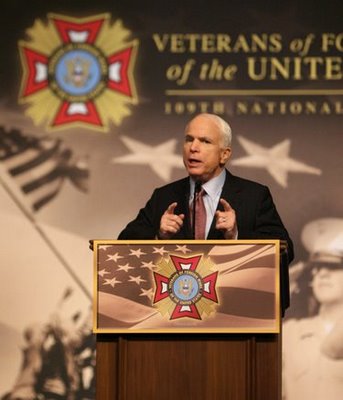 McCain takes great pride in his record of accomplishments, enjoys boasting at every turn, even encourages everyone to check for themselves. Here's his record.

· Veterans Groups Give McCain Failing Grades. In its most recent legislative ratings, the non-partisan Disabled American Veterans gave Sen. McCain a 20 percent rating for his voting record on veterans' issues. Similarly, the non-partisan Iraq & Afghanistan Veterans of America gave McCain a "D" grade for his poor voting record on veterans' issues, including McCain's votes against additional body armor for troops in combat and additional funding for PTSD and TBI screening and treatment.

· McCain Voted Against a $13 Billion Increase in Funding for Veterans Programs. McCain voted against an amendment to increase spending on veterans programs by $13 billion. (S.C.R. 57, Vote 115, 5/16/96)

· McCain Voted Against $44.3 Billion for Veterans Programs. McCain was one of five senators to vote against a bill providing $44.3 billion for the Department of Veterans Affairs, plus funding for other federal agencies. (H.R. 2684, Vote 328, 10/15/99)

· McCain Voted Against $51 Billion in Veterans Funding. McCain was one of five senators to vote against the bill and seven to vote against the conference report that provided $51.1 billion for the Department of Veterans Affairs, as well as funding for the federal housing, environmental and emergency management agencies and NASA. (H.R. 2620, Vote 334, 11/8/01; Vote 269, 8/2/01)

· McCain Voted Against Adding More Than $400 Million for Veterans' Care. McCain was one of 13 Republicans to vote against providing an additional $430 million to the Department of Veterans Affairs for outpatient care and treatment for veterans. (S.Amdt. 3642 to H.R. 4939, Vote 98, 4/26/06)

· McCain Supported Outsourcing VA Jobs. McCain opposed an amendment that would have prevented the Department of Veterans Affairs from outsourcing jobs, many held by blue-collar veterans, without first giving the workers a chance to compete. (S.Amdt. 2673 to H.R. 2642, Vote 315, 9/6/07)

· McCain Opposed the 21st Century GI Bill Because It Was Too Generous. McCain did not vote on the GI Bill that will provide better educational opportunities to veterans of the Afghanistan and Iraq wars, paying full tuition at in-state schools and living expenses for those who have served at least three years since the 9/11 attacks. McCain said he opposes the bill because he thinks the generous benefits would "encourage more people to leave the military." (S.Amdt. 4803 to H.R. 2642, Vote 137, 5/22/08; Chattanooga Times Free Press, 6/2/08; Boston Globe, 5/23/08; ABCNews.com, 5/26/08)

· Disabled American Veterans Legislative Director Said That McCain's Proposal Would Increase Costs For Veterans Because His Plan Relies On Private Hospitals Which Are More Expensive and Which Could Also Lead To Further Rationing Of Care. "To help veterans who live far from VA hospitals or need specialized care the VA can't provide, McCain proposed giving low-income veterans and those who incurred injury during their service a card they could use at private hospitals. The proposal is not an attempt to privatize the VA, as critics have alleged, but rather, an effort to improve care and access to it, he said. Joe Violanti, legislative director of the Disabled American Veterans, a nonpartisan organization, said the proposal would increase costs because private hospitals are more expensive. The increased cost could lead to further rationing of care, he said." (Las Vegas Sun, 8/10/08)

LACK OF SUPPORT FOR THE TROOPS

· McCain co-sponsored the Use of Force Authorization. McCain supported the bill that gave President George W. Bush the green light--and a blank check--for going to war with Iraq. (SJ Res 46, 10/3/02)

· McCain Opposed Increasing Spending on TRICARE and Giving Greater Access to National Guard and Reservists. Although his campaign website devotes a large section to veterans issues, including expanding benefits for reservists and members of the National Guard, McCain voted against increasing spending on the TRICARE program by $20.3 billion over 10 years to give members of the National Guard and Reserves and their families greater access to the health care program. The increase would be offset by a reduction in tax cuts for the wealthy. (S.Amdt. 324 to S.C.R. 23, Vote 81, 3/25/03)

· McCain voted against holding Bush accountable for his actions in the war. McCain opposed the creation of an independent commission to investigate the development and use of intelligence leading up to the war in Iraq. (S.Amdt. 1275 to H.R. 2658, Vote 284, 7/16/03) 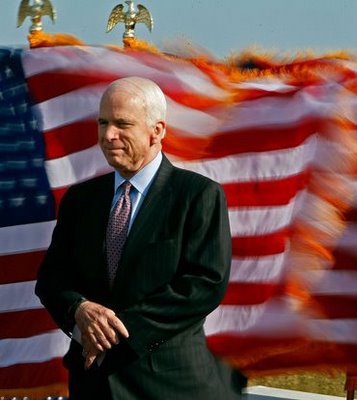 · McCain announced his willingness to keep U.S. troops in Iraq for decades--a statement sure to inflame Iraqis and endanger American troops. McCain: "Make it a hundred" years in Iraq and "that would be fine with me." (Derry, New Hampshire Town Hall meeting, 1/3/08)

· McCain voted against a ban on waterboarding--a form of torture--in a move that could eventually endanger American troops. According to ThinkProgress, "the Senate brought the Intelligence Authorization Bill to the floor, which contained a provision from Sen. Dianne Feinstein (D-CA) establishing one interrogation standard across the government. The bill requires the intelligence community to abide by the same standards as articulated in the Army Field Manual and bans waterboarding." McCain voted against the bill. (H.R. 2082, Vote 22, 2/13/08)

· McCain Also Supported Outsourcing at Walter Reed. McCain opposed an amendment to prevent the outsourcing of 350 federal employee jobs at Walter Reed Army Medical Center--outsourcing that contributed to the scandalous treatment of veterans at Walter Reed that McCain called a "disgrace." (S.Amdt. 4895 to H.R. 5631, Vote 234, 9/6/06; Speech to VFW in Kansas City, Mo., 4/4/08)

· McCain said it's "not too important" when U.S. troops leave Iraq. This exchange occurred on NBC's Today Show with Matt Lauer:LAUER: If it's working, senator, do you now have a better estimate of when American forces can come home from Iraq?
McCAIN: No, but that's not too important.(NBC, Today Show, 6/11/08)
CHEERLEADING FOR WAR WITH IRAQ--WHILE AFGHANISTAN WAS UNFINISHED

· McCain suggested that the war in Iraq could be won with a "smaller" force. "But the fact is I think we could go in with much smaller numbers than we had to do in the past. But I don't believe it's going to be nearly the size and scope that it was in 1991." (CBS News, Face the Nation, 9/15/02)

· McCain said winning the war would be "easy." "I know that as successful as I believe we will be, and I believe that the success will be fairly easy, we will still lose some American young men or women." (CNN, 9/24/02)

· Continuing his pattern, McCain also said on MSNBC that we would win the war in Iraq "easily." "But the point is that, one, we will win this conflict. We will win it easily." (MSNBC, 1/22/03)

· McCain argued Saddam was "a threat of the first order." Senator McCain said that a policy of containing Iraq to blunt its weapons of mass destruction program is "unsustainable, ineffective, unworkable and dangerous." McCain: "I believe Iraq is a threat of the first order, and only a change of regime will make Iraq a state that does not threaten us and others, and where liberated people assume the rights and responsibilities of freedom." (Speech to the Center for Strategic & International Studies, 2/13/03)

· McCain echoed Bush and Cheney's rationale for going to war. McCain: "We're going to win this victory. Tragically, we will lose American lives. But it will be brief. We're going to find massive evidence of weapons of mass destruction . . . It's going to send the message throughout the Middle East that democracy can take hold in the Middle East." (Fox News, Hannity & Colmes, 2/21/03)

· McCain echoed Bush and Cheney's talking points that the U.S. would only be in Iraq for a short time. McCain: "It's clear that the end is very much in sight . . . It won't be long . . . it'll be a fairly short period of time." (ABC, 4/9/03)
STAUNCH DEFENSE OF THE IRAQ INVASION

· McCain maintained that the war was a good idea and that George W. Bush deserved "admiration." At the 2004 Republican National Convention, McCain, focusing on the war in Iraq, said that while weapons of mass destruction were not found, Saddam once had them and "he would have acquired them again." McCain said the mission in Iraq "gave hope to people long oppressed" and it was "necessary, achievable and noble." McCain: "For his determination to undertake it, and for his unflagging resolve to see it through to a just end, President Bush deserves not only our support, but our admiration." (Speech, Republican National Convention, 8/31/04)

· McCain said the war in Iraq was "worth" it. Asked if the war was a good idea worth the price in blood and treasure, McCain: "It was worth getting rid of Saddam Hussein. He had used weapons of mass destruction, and it's clear that he was hell-bent on acquiring them." (Republican Debate, 1/24/08)

· When questioned about Osama bin Laden after the 1998 U.S. missile strikes in Afghanistan, McCain surmised that the terrorist leader wasn't as "bad" as "depicted." "You could say, Look, is this guy, Laden, really the bad guy that's depicted? Most of us have never heard of him before." (Interview with Mother Jones magazine, 11/1998)

· McCain was unaware of previous Sunni-Shia violence before the Iraq War. "There's not a history of clashes that are violent between Sunnis and Shias. So I think they can probably get along." (MSNBC, Hardball, 4/23/03)

· McCain again confused Sunni Muslim al Qaeda operatives with Shi'a Muslim insurgents. The Washington Post reported of McCain: "He said several times that Iran, a predominately Shiite country, was supplying the mostly Sunni militant group, al-Qaeda. In fact, officials have said they believe Iran is helping Shiite extremists in Iraq. "Speaking to reporters in Amman, the Jordanian capital, McCain said he and two Senate colleagues traveling with him continue to be concerned about Iranian operatives 'taking al-Qaeda into Iran, training them and sending them back.' "Pressed to elaborate, McCain said it was 'common knowledge and has been reported in the media that al-Qaeda is going back into Iran and receiving training and are coming back into Iraq from Iran, that's well known. And it's unfortunate.'" (Press conference, Amman, Jordan, 3/18/2008)

· Yet again, McCain demonstrated that he didn't know whether al Qaeda was a Sunni or Shiite organization. While questioning General David Petraeus during a Senate hearing, the following exchange occurred:

MCCAIN: Do you still view al Qaeda in Iraq as a major threat?

PETRAEUS: It is still a major threat, though it is certainly not as major a threat as it was say 15 months ago.

MCCAIN: Certainly not an obscure sect of the Shi'ites overall?
PETREAUS: No.

MCCAIN: Or Sunnis or anybody else.

· McCain incorrectly thought General David Petraeus was in charge of Afghanistan. The Army Times reported: "Speaking Monday at the annual meeting of the Associated Press, McCain was asked whether he, if elected, would shift combat troops from Iraq to Afghanistan to intensify the search for al-Qaida leader Osama bin Laden.

'I would not do that unless Gen. (David) Petraeus said that he felt that the situation called for that,' McCain said, referring to the top U.S. commander in Iraq.

"Petraeus, however, made clear last week that he has nothing to do with the decision. Testifying last week before four congressional committees, including the Senate Armed Services Committee on which McCain is the ranking Republican, Petraeus said the decision about whether troops could be shifted from Iraq to Afghanistan was not his responsibility because his portfolio is limited to the multi-national force in Iraq." (Annual meeting of the Associated Press, 4/14/08)

· McCain credited the "surge" for the "Anbar Awakening"--even though the Anbar Awakening preceded the surge by nearly a year. (7/22/08)

· John McCain has also recently demonstrated either serious knowledge gaps in terms of foreign policy, or mounting confusion, when discussing an array of other countries:

Spain: McCain refused to commit to meeting with the president of Spain, a NATO ally, after becoming confused about America's relationship with Spain, its leader, and, possibly, exactly where Spain is located. (9/17/08)

Czech Republic and Slovakia: McCain referred to the two countries using the name "Czechoslovakia" several times--despite the fact that Czechoslakia split apart and hasn't existed since 1993. (7/15/08; 7/14/08)

Venezuela: McCain said that Venezuela was a Middle Eastern country. (9/30/08)