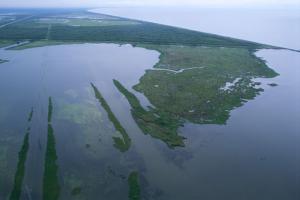 A coalition of environmentally minded organizations held a press conference this morning to condemn Governor Bobby Jindal’s opposition to a local levee authority’s lawsuit that seeks coastal restoration payments from 97 oil and gas companies. Condemnation from eco-friendly orgs is nothing new for da’ Governor, but this time the groups focused on Jindal’s finances. According to the coalition, Bobby J’s campaigns have pocketed at least a million dollars from Big Energy since his first run at the Rouge House in 2003.

According to the coalition, at least 36 percent, and possibly as much as 90 percent of Louisiana’s massive wetland loss has been caused by the exploits of the oil and gas industry. The group contends that the energy industry themselves have admitted that non-remediated navigation channels and pipeline canals have radically destroyed the natural coastline.

About a month ago, the Southeast Louisiana Flood Protection Authority East filed a massive suit against the oil and gas companies that seeks to recoup payments for 10,000 miles of canal dredging, pipeline and other construction that’s harmed coastal wetlands to make way for industry infrastructure.

The Authority has run into firece opposition from the Jindal administration. Less than a day after the suit was fired, the governor issued a statement demanding that the levee authority rescind the suit. He also said the legal proceeding had been “hijacked” by trial lawyers who were looking to make money off the suit.

But for the environmental groups in favor of the lawsuit, it’s Jindal’s campaigns that have been enriched by the oil industry.

“The Governor is the Million Dollar Man when it comes to taking money from the oil and gas industry,” said Anne Rolfes, Founding Director of the Louisiana Bucket Brigade. “We now know why he is against the lawsuit. He is selling out our state so he can raise money for his political campaigns. It’s a scandal on par with the worst this state has ever seen – and we’ve seen a lot.”

The group pointed out 231 contributions averaging $4000 from throughout the entire oil and gas industry.

Rolfes singled out the Helis Oil and Gas Company, a named defendant in the levee board lawsuit, as Jindal’s largest contributor ($25,000.) Also named in the lawsuit is the Estate of William G. Helis, who has contributed an additional $5,000. In total, Jindal has received contributions from 12 of the named defendants in the levee board lawsuit, totaling $82,703.99 of the $1,019,777.08 that Jindal has received in all from the oil and gas industry.

“The oil and gas industry boasts how they have donated tens of thousands to schools and different causes, but that is just a drop in the bucket compared to the tens of billions these companies have made at Louisiana’s expense,” said Darryl Malek-Wiley, Organizing Representative for the Sierra Club’s Environmental Justice and Community Partnership Program. “Without bringing these companies to the table, the cost of restoring Louisiana’s gulf and wetlands will be passed on to taxpayers.”

Rolfes argued that the federal government refuses to pay for coastal restoration because it is the fault of oil and gas and the State of Louisiana that has allowed it to happen.

“I think that if we finally take responsibility and make those responsible pay their fair share, maybe it would loosen up more federal funds to help out with cost,” she said.

Jindal’s office called the press conference “just another tactic” to draw attention to the suit. 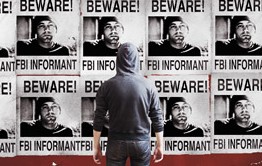