” … As of the end of 1941, by which time the Germans, with local help, had already murdered about 1 million Jews, the starvation of Soviet prisoners was still the greatest German crime. Even in occupied Poland – in 1942 to become the major site of the Holocaust – the mass murder of POWs brought from the east was, in 1941, still the central horror. As of December 1941, more Soviet POWS had died in occupied Poland than had either Jews or Poles. … More Soviet prisoners died in German camps on a given day in autumn 1941 than American and British prisoners did during the entire war … “ 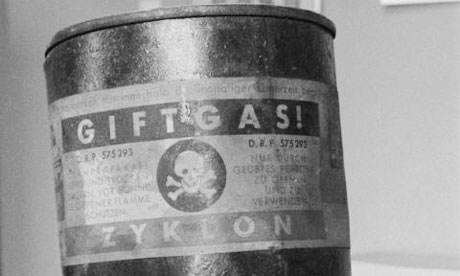 A can of Zyklon B, containing the hydrogen cyanide pellets that were used in the gas chambers of Auschwitz. The poison was tested first on captured Red Army soldiers before being used in the mass murder of Jews. Photograph: Corbis/Ira Nowinski In the east, Nazi plans were worse even than Nazi reality. As German leaders prepared for the invasion of the Soviet Union in spring 1941, they agreed a quick summer victory would be followed by the starvation of some 30 million people. A Hunger Plan foresaw the “extinction of industry as well as a great part of the population”. Soviet cities would be destroyed, Soviet industry destroyed, and eastern lands reduced to depopulated prairie ripe for German agrarian colonisation. But the Red Army resisted and Stalin remained in the Kremlin. It proved difficult to starve large numbers of civilians without total control of territory. Stalin had managed to starve millions of his own citizens in these same lands a few years before, but he had at his disposal, then, an apparatus of terror and a loyal party organisation that the invading Germans could not match. Though the Hunger Plan proved impossible, it provided the moral premises for the Wehrmacht’s treatment of civilians and prisoners of war after the invasion of June 1941. Starvation proceeded where German soldiers had total control of land and people. Kharkiv, Kiev and, above all, besieged Leningrad were starved, killing more than 1 million Soviet civilians. The main victims of the starvation policy were Soviet soldiers taken captive. Huge numbers of Red Army men (and women) were taken prisoner in that summer of 1941, largely because Stalin opposed retreats. In one engagement near Smolensk, 348,000 prisoners were taken; after the Battle of Kiev, the figure was 665,000. The wounded and sick were shot where they were found. Most of the prisoners who reached German camps would be dead by 1942. In the German POW camps in occupied Soviet Belarus, Soviet Ukraine and Poland, prisoners were not even registered by name. As the German quartermaster general of the German army indicated, prisoners who could not work “were to be starved”. At a single camp near Minsk, some 109,500 prisoners died. At another at Molodechno, prisoners submitted written petitions asking to be shot rather than dying slowly of hunger in the cold. Many prisoners were indeed shot. The German Einsatzgruppen made selections of those whom they believed to be Jews and political officers, and killed them on the spot. Some 3.1 million Soviet prisoners perished in German captivity: about 500,000 were shot; the remaining 2.6 million died of starvation and hunger-related disease. More Soviet prisoners died in German camps on a given day in autumn 1941 than American and British prisoners did during the entire war. As of the end of 1941, by which time the Germans, with local help, had already murdered about 1 million Jews, the starvation of Soviet prisoners was still the greatest German crime. Even in occupied Poland – in 1942 to become the major site of the Holocaust – the mass murder of POWs brought from the east was, in 1941, still the central horror. As of December 1941, more Soviet POWS had died in occupied Poland than had either Jews or Poles. This crime has been forgotten, in part because Stalin presented the prisoners as deserters, and in part because the victims, of dozens of nationalities, have no coherent group to remember them. The German mass murder of Soviet POWs has been overshadowed by the Holocaust; yet, the two policies are best understood together. The concentration camps in Germany became killing facilities when they received Soviet prisoners, who were murdered in shooting campaigns at Dachau, Buchenwald, Sachsenhausen, Mauthausen and Auschwitz. Soviet prisoners were gassed experimentally, using both carbon monoxide (at Sachsenhausen) and hydrogen cyanide (at Auschwitz) – the two agents then used to asphyxiate millions of Jews. When the Germans began to release Soviet prisoners of war, one of their tasks was to guard the new German death facilities at Bełżec, Sobibór and Treblinka, where the Jews of Poland were gassed in 1942. Thus some survivors of the first major German killing policy became collaborators in the second. In late 1941, as the Soviet Union fought on, Nazi ideology and German policy shifted to accommodate a longer war in the east. As millions of Slavs, some of them surviving Soviet prisoners of war, came to Germany to replace the workers sent to the eastern front, the image of the enemy who must be exterminated changed. No longer was it both the Slavs and the Jews, the former supposedly led by the latter, but chiefly the Jews as such. Slavs were treated horribly in Germany after 1942, but never as murderously as in the starvation camps of 1941. Jews, on other hand, were targeted in 1942 for a policy of complete annihilation, even when their work was valuable for the Reich. The Jewish people were the ultimate enemy of the Reich, and their fate was the worst of all. But to appreciate just what that superlative “worst” means, we must grasp the fate of the Soviet prisoners of war. • Timothy Snyder is appearing at the Ukrainian Museum, New York to discuss his book, Bloodlands: Europe Between Hitler and Stalin, on Friday 22 October at 7:30pm http://www.guardian.co.uk/commentisfree/cifamerica/2010/oct/21/secondworldwar-russia