One former employee described the conservative group as having a “highly sexualized” atmosphere where drinking and drug use were commonplace. 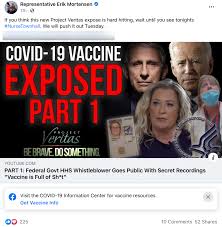 The conservative group Project Veritas has for years sought to embarrass political opponents and members of media organizations by surreptitiously recording them and publicizing their private communications.

But two lawsuits filed in federal court late Sunday by the organization’s former employees purported to expose its own inner workings, portraying a “highly sexualized” work culture where daytime drinking and drug use were common and the group benefited from employees who worked additional hours without pay.

Both lawsuits, filed in Manhattan, describe the dedication of a young staff of operatives who have attracted the support of powerful political allies and donors. One suit describes a corporate apartment the organization kept as having been used like a “frat house” for drinking, sex and parties.

That lawsuit also discloses the names of more than a dozen of the organization’s employees and the identities of field operatives, information that the group has taken significant care to shield.

The suits — which were triggered in part by a conflict with an ex-employee, Antonietta Zappier, over the terms of her departure from the organization — come as the group is under investigation by federal prosecutors, who have suggested they have evidence the organization was complicit in stealing a diary belonging to Ashley Biden, a daughter of President Biden; Project Veritas has denied any wrongdoing or knowledge that the diary was stolen.

Both lawsuits were filed by Arthur Z. Schwartz, a former general counsel for Acorn, a community organizing group that dissolved after an undercover sting operation carried out in part by Project Veritas’s founder, James O’Keefe.

In a statement, Mr. O’Keefe referred to Ms. Zappier as a “disgruntled” former employee and called her claims “a range of made-up falsehoods.”

“Zappier was fired months ago for unprofessional and inappropriate behavior in the workplace,” the statement said, adding that she had threatened to physically harm one of Project Veritas’s neighbors and insulted people who had reached out to the organization to tell their stories.

It also said that Mr. Schwartz was attempting to leverage her claims “to hurt Project Veritas,” adding: “His one and only objective in representing Zappier is to get payback for Veritas’s investigation into Acorn over 10 years ago.”

Mr. Schwartz objected to the characterization of Ms. Zappier, noting that she had received positive evaluations at work, had never been admonished for negative behavior and was trusted by Mr. O’Keefe.

Ms. Zappier’s lawsuit comes two months after Project Veritas filed a lawsuit against her and her husband, Vincent Zappier. In its suit, the group accused her of breaching the terms of a separation agreement, and her husband of harassing its employees. Some of the specific claims about Ms. Zappier included in Mr. O’Keefe’s statement were not in the organization’s lawsuit against the couple.

Although Project Veritas describes its employees as journalists, its operations typically diverge from standard journalistic practice, with the organization’s operatives masking their real identities or creating phony ones.

Project Veritas has an ongoing defamation suit against The Times, and the publication of articles based on the organization’s legal memos is the subject of litigation.

Ms. Zappier worked as an administrative assistant at Project Veritas from September 2019 to March 2022. One of the lawsuits, filed on her behalf, accuses the organization’s field director, Michael Spadone, of sexual harassment and assault, saying that he groped and kissed her in December 2021.

That lawsuit says that Mr. Spadone’s job at the organization is “to recruit, train and supervise” its operatives and that he participated in its field work.

Project Veritas’s lawsuit against Ms. Zappier anticipated her claims about Mr. Spadone, though it referred to him only by his code name, “Jitsu.” Project Veritas said in the suit that it had investigated allegations by Ms. Zappier against “Jitsu” but “did not find any corroboration for her claims.”

Ms. Zappier’s suit also described her as having worked closely with James O’Keefe, the organization’s leader, dealing with his parking tickets and laundry and signing his name on thousands of books for donors who had contributed a minimum of $200 for autographed copies.

The lawsuit also said that Mr. O’Keefe gave instructions to flag private messages on his social media account from attractive women so he could respond to them personally; that he wanted young, attractive female operatives he referred to as “pretty young things” or “PYTs” to be hired to go on undercover dates; and that he mandated that the group’s operatives review copies of the book and movie “Red Sparrow,” about a Russian intelligence agent trained in “sexpionage.”

The plaintiffs in the other suit, a proposed class-action claim, are Ms. Zappier; two other ex-employees, Nick Gioia and Dan Schuy, who say that they were not paid overtime for their work; and other “similarly situated” employees. Mr. Gioia and Mr. Schuy were video editors at Project Veritas, working 10 hours a day and sometimes more, the suit said.

Ms. Zappier’s individual suit is significantly more detailed. It says drinking and drug use were “rampant” within Project Veritas and that supervisors were sexually involved with subordinates.

Mr. Spadone often complimented Ms. Zappier’s appearance, repeatedly greeting her with, “Hey, gorgeous,” according to her suit. On Dec. 17, 2021, the suit said, a sweaty and intoxicated Mr. Spadone grabbed Ms. Zappier while she was on a dance floor, wrapped her in a bear hug and began to kiss her.

Ms. Zappier spoke about that incident with several employees, her lawsuit said, but did not go to Project Veritas’s head of human resources because she believed that doing so would jeopardize her job.

Ms. Zappier’s suit said that she felt pressure to extend herself on behalf of the organization, so much so that it came to frustrate her husband. Her suit described a confrontation between Mr. Zappier and one of Project Veritas’s operatives.

According to Ms. Zappier’s suit, the operative, Bradley Barkowski, who went by the code name “Jasper,” wanted to use the shower at Ms. Zappier’s house. Ms. Zappier agreed and Mr. Barkowski arrived at the house, to the displeasure of her husband.

After Mr. Barkowski ignored a request to leave, Mr. Zappier retrieved a gun and informed the operative that he was armed. Ms. Zappier then asked Mr. Barkowski to leave again, which he did, the suit said.

But Ms. Zappier’s suit says that incident, which immediately preceded her firing, was not at issue in her termination. Instead, she said, the group’s head of human resources attributed the dismissal to an inappropriate voice mail from her from a year earlier that had surfaced on the internet.

Ms. Zappier contends that she was dismissed as “payback” for rejecting what she took as an invitation from Mr. Spadone six days before her firing to spend a weekend at his home for a sexual liaison.