Some of those on the list disavowed their membership, others did not. 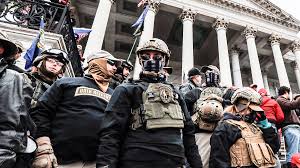 HOUSTON — Dozens of law enforcement officers and elected officials from the Houston area signed up and paid dues to the anti-government group Oath Keepers, according to a KHOU 11 Investigates analysis of membership rolls obtained by the non-profit journalist collective Distributed Denial of Secrets, DDOS.

“That was sort of the intent of the report was to scratch the surface and let the investigative journalists dig deeper,” said Jake Hyman, a spokesman for the ADL.

Prominent members of the Oath Keepers are currently on trial, facing numerous federal charges including seditious conspiracy in connection with the Jan. 6 attack on the U.S. Capitol. Experts who have researched the far-right extremist group said it has spent years recruiting people in positions of power and authority.

“They use certain issues to bring folks in; they use the idea of service, camaraderie,” said Rachel Carroll Rivas, interim deputy director of research, reporting and analysis at the Southern Poverty Law Center. “By targeting people who are in these positions of authority and respectability, it does actually bring legitimacy to the organization and that was a purposeful strategy that was done by Oath Keepers.”

Nearly half of the 41 officers and politicians on the Houston-area list responded to KHOU 11 requests for comment. Most disavowed their membership with the group that federal prosecutors allege was instrumental in organizing the Jan. 6 attack.

“I denounce the illegal actions of the organization reflected in the behavior of its leadership,” said one local law enforcement officer who signed up with the Oath Keepers in 2013.

“I didn’t realize it was an anti-government group until after I joined, and once I realized this, I wanted nothing to do with them and regretted joining in the first place,” said another local law enforcement officer who also joined in 2013.

Galveston County Commissioner Joe Giusti said on the surface, the Oath Keepers sounded like a good idea when he joined nine years ago when he worked as a deputy constable.

“I heard about it through friends,” Giusti said. “Just the idea of living up to your oath makes a lot of sense to me.” 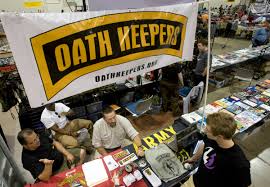 But he said the initial pitch of defending the constitution quickly changed as he read various blogs on the Oath Keepers website, and he did not renew his membership after a year.

“When I get in there and read stuff it’s like hmm, this is progressively getting worse … worse as far as kind of radical if you would,” Giusti said.

He is among the nine local public and party officials in the Houston area whose names appear on the Oath Keepers membership rolls. Six of those officials responded to our requests for comment.

They include Montgomery County Republican precinct chair Ginger Russell, who said she was not going to address the issue.

“Due to the political climate where people are threatened, I don’t feel at liberty to talk,” Russell said.

Lewchanin said it was “long ago” when he joined.

“I never really participated in anything,” he said.

“We are seeing people defect, but there are folks who have dug in, who dug in their heels,” said the Southern Poverty Law Center’s Carroll Rivas.

One such Oath Keepers member is Bob Bagley, who has served on the Montgomery County Hospital District Board of Directors since 2010.

“I’m still a member,” Bagley said. “I still believe in what the organization was founded on—to uphold the constitution.”

Bagley said he went to Washington D.C. last January 6 but never entered the Capitol building. He called the attack “B.S.” and said he and others were only there to peacefully protest.

“The whole thing was a farce, it was orchestrated by the government,” Bagley said.

In the 20 months since Jan. 6, 2021, more than 870 individuals have been arrested in nearly all 50 states for crimes related to the breach of the U.S. Capitol, according to the U.S. Department of Justice. Those include more than 265 individuals charged with assaulting or impeding law enforcement.

Oath Keepers’ founder Stewart Rhodes and other leaders of the organization are facing seditious conspiracy charges and their federal trial is expected to continue for several more weeks. Carroll Rivas said she hopes convictions will wake up current members and prompt them to reconsider their allegiance.

“Taking stock, pulling back and questioning their involvement in what this group really represents and all groups like it,” she said.

DDOS made some redacted Oath Keeper information public in 2021 and released the unredacted membership rolls to KHOU last month. It contains the names of more than 38,000 registrations as well as addresses, e-mail addresses, and phone numbers.

KHOU11 Investigates used that data to identify area leaders through law enforcement licenses, public databases and social media. We chose to name only elected officials on the leaked membership rolls who responded to requests for comment.